March has been a busy month for us! Must be all that extra light we’re getting right now that’s letting us get all this work done!

Ruth Hart papers; 1964-2003. HMC-1279. The collection contains the papers of Ruth Hart, which mostly relate to her years designing costumes and volunteering for various Anchorage theatres. 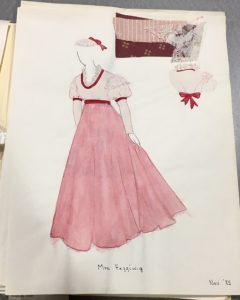 Fabric sample and drawing of Mrs. Fezziwig’s outfit by Ruth Hart for A Christmas Carol, 1985. 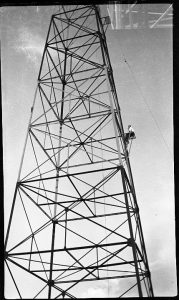 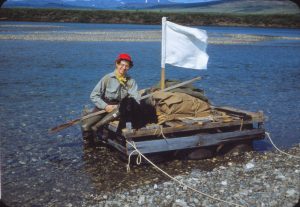 David and Jenny Strandberg papers; 1897-1970. HMC-0357. 16mm films were added to this collection from a family who lived in Anchorage and operated mines throughout Alaska.

1 letter from the Fred Odlin papers, HMC-0644. Fred Odlin was an employee of the Alaska Steamship Company and served aboard the S.S. Curacao. In his letters home to his mother, sisters, and nieces, he writes about his daily life aboard ship. 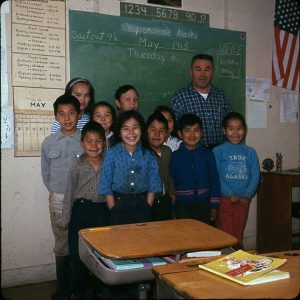 41 recordings from the Ruben Gaines papers, HMC-0110. Ruben Gaines was a well-known Fairbanks and Anchorage radio broadcaster. He wrote, performed, and recorded many Alaska-themed stories. His best-known character was probably Chilkoot Charlie, for whom the Anchorage bar is named.

48 images from Henry S. Kaiser Jr. papers, HMC-1148. Henry was a long-time Alaska resident and photographer. We now have over 450 of his images online. 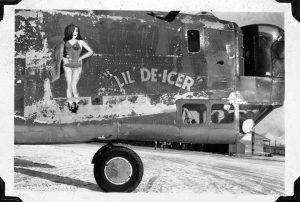 49 images from Carl D. Burns papers, HMC-1277. Carl Burns enlisted in the Army in 1946 and was sent to the Aleutian Islands as part of Task Force Williwaw, which was dispatched to Alaska in the winters of 1946 and 1947 to test U.S. Army equipment in cold weather.

2 images from HMC-1283. We know next to nothing about the creator of these photographs, but the collection includes images from Sitka and what is possibly (probably?) Valdez/Woody Island and the US Navy installation there. The photos that have been placed on the Digital Archives so far are from Sitka.

We’re getting closer and closer to making sure we don’t have legacy (i.e. old-style) finding aids around. In March, we rehoused the collections and updated the collection guides to:

Veronica was invited to meet with the Anchorage Kiwanis and to talk with them about the Archives and what we have and what we collect.

Veronica and Gwen provided a vault tour and hints to using the Archives website for the Consortium Library’s part-time reference librarians.

Gwen and Conner (one of our student workers) went on a spring cleaning binge and cleaned and organized the supply room and lab area. It really needed to be done and it’s great to walk in those rooms and feel like we have a little space to move about. 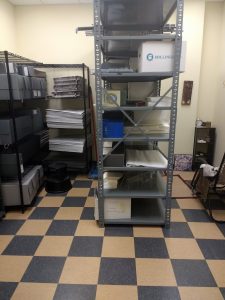 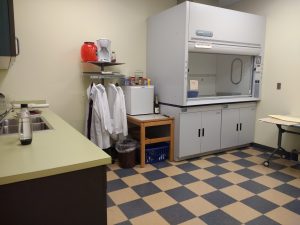 Bri and Conner, our student workers, have been especially busy this month. Between them they’ve rehoused several new (and a few older) collections, digitized quite a few photographs (400-500, some of which show up in that list of photos added to the Digital Archives above), sleeved some high-risk negatives into more appropriate envelopes (Bri), gathered collections data for an upcoming grant proposal (Conner), and Bri has started in on a performance index for the Anchorage Concert Association records. We have to acknowledge that a large portion of our productivity this month has been due to everything our student workers have been able to accomplish. Thanks so much, guys!

Not only did they do all that, Bri and Conner also put together an exhibit on some of the great historical medical books from the Rare Books collection. If you’re interested in seeing it, it’s in the exhibit cases in the Consortium Library’s Great Room on the first floor. 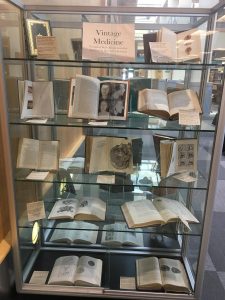 One of the “other” things we began this month and which we’re particularly excited about, is a podcast! We’ll be releasing the first episode of Archiving AK in mid-April. Here’s a sneak image preview of one of the episodes that will be available later this year: you can see how much we’re loving doing this. 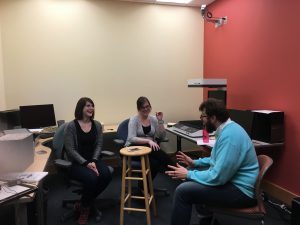