Home Uncategorized Scenes from the Archives: So many questions and no answers

Scenes from the Archives: So many questions and no answers

Occasionally when we are filling reference requests, describing photographs for Alaska’s Digital Archives, or describing new collections, we come across photographs, documents, and audio recordings that lead to more questions than answers. Like what are those two little boys in the background of the photograph fighting about? Why is the man wearing a stuffed beaver on his head? And how many pigs does it actually take to fill a cargo hold of a plane?

Below are the most recent materials that have us asking “why?” 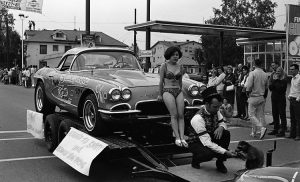 Veronica: It took me a couple minutes to notice this, but what is up with the raccoon on the right side of the image? The photograph, which is undated, was taken during a Golden Days Parade in Fairbanks. Is the raccoon alive or dead? I’m assuming alive. But did it just happen to run across the street and hop up on the parade float? Or is it supposed to be part of the float and is somehow leashed on? And if it is part of the float, why? And why is the man shaking its hand, looking like it’s an everyday thing? A colleague reminded me that raccoons are not indigenous to Alaska (although they were introduced, unsuccessfully, to Southeast Alaska in the 1930s), so it probably wasn’t just wandering around the streets checking out that parade. Or was it? Or maybe it was somebody’s pet? There is no other context within the collection regarding the raccoon or the people in the image. And there are no other photographs of the raccoon in the collection. The photographer, Henry S. Kaiser Jr., has since passed away. I may never know the answers to my questions. If there is anyone out there who could provide any answers, please do so. The photograph is part of the Henry S. Kaiser Jr. papers.

Arlene: It’s not an image. It’s a story in poem format. And first I need to call spoiler alert because I’m about to tell you the very end of a story by Ruben Gaines. But at the same time, I don’t know that I need to call it a spoiler alert. Is it a spoiler alert if the ending is a non sequitur? I suppose it is, if it’s only a non sequitur to somebody like me who doesn’t know the context. If you’d like to listen to the recording first, so I don’t ruin it for you as I explain my confusion below, it’s the story of Chilkoot Charlie and Sweet Vivian and I recently loaded it up to the Alaska’s Digital Archives.

We periodically get requests from folks who listened to Ruben’s radio shows and albums back in the day since we have a collection of Mr. Gaines papers and recordings and there’s a lot of nostalgia out there for his material. A few years ago, after one such request had come in, we decided we should listen to one of the recordings and we chose one about Chilkoot Charlie since he’s the best known character from Mr. Gaines’ work. We listened to Chilkoot Charlie and Sweet Vivian. It’s the story of the last woman (Vivian) and the last man (Charlie) in the north. Vivian decides Charlie is the guy for her (not like she has any choices) and goes after him.

Okay, spoiler alert: here’s the last stanza of the poem:

Sweet Vivian made one mistake that fearful day,
She looked at Chilkoot’s ugly face and promptly passed away.
But hold, with naught but Chilkoot Charlie left, in heaven’s name,
What carried on the northern race?
Why Junior, Statehood came.

The recording ended and we just stared at each other. Because Statehood? Wait, what? If I had to guess, my guess would be that it’s a reference to some of the pro-Statehood efforts  back in the late 50s (the recording was done in 1966) that may have promised that all would be wonderful once Alaska got Statehood. But honestly, I don’t know because I’m not an expert on how Statehood was playing out in the 1960s in Alaska. So if you remember it and remember the context and can explain the “Because Statehood” part of this piece, please let us know! By the way, if you’re ever visiting us and find us completely confused and answerless to a why question, you may hear one of us say “Because Statehood!” It’s now our all-purpose answer to things we don’t understand. Somehow I think Mr. Gaines would have approved. 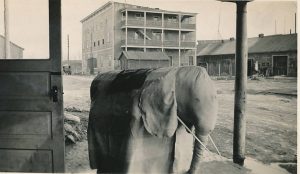 Gwen: I know we’ve posted this to Twitter in the past, but until now, we have not had the opportunity to analyze this photo in-depth. This may be the creepiest elephant costume in the history of the world. It appears to be constructed from a dingy sheet, or possibly an old tablecloth, or maybe both, since the horizontal stripe pattern is not consistent. Also, what are those tusks made out of, and why do they appear to be coming out of the poor, unfortunate creature’s ears? And then there are the eyes, the cold soulless eyes. If this costume had been made today instead of in the 1930s, I would say they had been drawn on with a Sharpie. Since Sharpies had not yet been invented, we can only speculate about how the creator of this monstrosity achieved such a chilling effect.

Since our investigation of the elephant’s construction has only yielded more questions, we can now turn to the most pressing question of all: why? This is where context, always important in archives, comes in. The photograph comes from the Harry and Norma Hoyt family papers, and the other photos near this one in the folder are from Norma Hoyt’s time working as a teacher in Fairbanks. Because of this, I think it is safe to assume that there are children inside the elephant. But, again, why? And what kind of parent or teacher would make poor, innocent children wear something so terrifying? Was it Halloween? Were they putting on a play? Campaigning for the Republican Party? Also, how many children are in there? I think the logical assumption, which is backed up by another photo of the elephant from the side, is that there are two children, one in front and one in back. But doesn’t it kind of look wider in front than one child? Maybe it’s just the angle, but maybe this abomination is actually four children in a creepy elephant costume. Again, I have so many more questions about this picture than I have answers.

There’s a contact us link up at the top of the page if you have answers to any of these questions. We’d love to hear from you!