Home Digitization Getting the grants: Atwood Foundation and CLIR RAR

Getting the grants: Atwood Foundation and CLIR RAR

In 2017, I (Veronica) decided I wanted to digitize the audio, video, and film within our collections. The idea had been in my head for a while, mainly because we kept receiving requests to digitize the audio reels in the Genie Chance papers that contained radio broadcasts related to the 1964 Earthquake. Unfortunately, due to the cost of digitization, the Archives could not afford to digitize these for our users. If a user wanted the item, they would have to pay for the digitization out of their own pocket, which can be expensive. This is not something we like telling our users. Part of our mission is to make the materials in our collections accessible to our researchers, but obsolete formats can make this hard.

I decided I had enough. I began looking for grants to apply for in order help make our A/V materials more accessible. One possibility I saw was the Council on Library and Information Resources (CLIR) Recordings at Risk (RAR) Program. For RAR, we could ask for as little as $10,000 and as much as $50,000. I knew I could apply for this grant, but the collections really had to be targeted and pertain to a specific subject given the complexity and word limit for the grant application. I set that one in the back of my head.

I remembered that the Atwood Foundation also could potentially support something like this. However, they award grants that serve Anchorage residents and the vicinity. I decided to speak with them about digitizing the A/V materials in our collections relating to Anchorage. During this meeting, I was also told their other focuses are the arts, journalism, history, and the military community. An idea formed, and I decided I could also digitize our A/V materials that related to Anchorage, which would include those 1964 Earthquake audio reels that are of interest to our users.

But applying to the Atwood Foundation would only cover some of our A/V. In 2018, we received an addition to the Walter Johnson papers. Included in this addition were about 30 audio reels, 5 dictabelts, and one film. I began thinking of our users and new collections. In the previous years, we had received a couple collections relating to Alaska public health and have seen an uptick in reference requests relating to this subject. I also figured we had just the right amount of Alaska public health materials to qualify for the CLIR RAR grant. 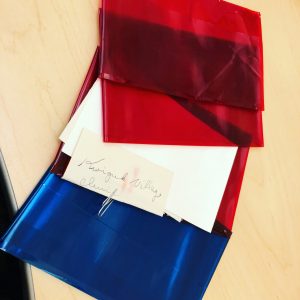 Deciding what I was going to apply for and what collections I wanted to include was the easy part. The hard part was figuring out the formats and number of A/V materials within our collections. When we describe collections, we were never very consistent about using the same terms for A/V materials. Film was typically described as film, rarely indicating if it was 8, 16, or 35mm. Video was typically described as video, and was rarely described as one of the many types of video such as U-matic, VHS, Betamax, Betacam, EIAJ, Hi-8, or 2-inch quad to name a few. 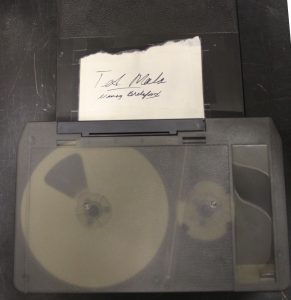 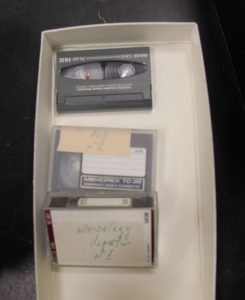 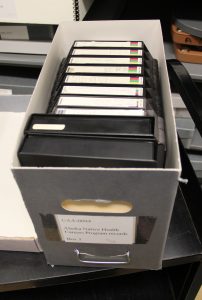 That sent me on a task. First, I had to note every collection in our holdings that had materials in an A/V format. And then note where they were within the collection. Luckily, I also had student workers to help in this, however they would occasionally have troubles telling the difference between film and ¼-inch audio reels. And, well, video can be difficult. It’s easy if it says on the case if it’s U-matic or Betamax, but we are not always fortunate. Luckily, the Alaska Moving Image Preservation Association (AMIPA) shares our space and did not seem to mind my seemingly continuous confirmations on format type. (Did you know there are little U-matics and big U-matics? I didn’t.)

I not only had to make a list of the format types, I also had to determine the run time of the items which would help me receive a better estimate from our vendor, Scene Savers. Some were easy. With film, you can base it on the footage, which is sometimes indicated on the reel. If not, you can always use a ruler and a chart. Audio reels are a different story. The run time of an audio reel is dependent on the tape length, the speed at which it was recorded, if it’s monophonic or stereophonic, and if it was recorded in one direction on a single track, or both directions on a double track. Sound confusing? It was. If the creator of the reel did not mark any of this on the back of the box or the actual runtime (which is often), it was almost impossible to estimate. A 600-foot audio reel could run between 1 hour to 15 minutes, depending on all of the variables described above.

I also had to include the descriptions of the items, which would help me to determine what I wanted to have digitized. Although, I had to keep in mind that there is the potential the descriptions written on the items would not always be accurate. And in fact, this was the case for two of the films in the UAA. Athletics moving images collection. They were labeled as being basketball but ended up being footage of volleyball games and practices.

Once a list was made, I then chose the items I wanted to have digitized for the grant and received an estimate from our vendor. The first grant I applied for was the CLIR RAR grant. Writing this grant probably took me nearly four days. For many of the parts in the application, there were word maximums I had to abide by, which was difficult at times given that I was using items from multiple collections with different facets relating to Alaska public health. In a webinar I watched for the CLIR RAR grant, they do recommend choosing items from one collection. For our archives, this would be difficult, since we do not typically have whole collections of A/V materials.

The Atwood Foundation grant, which was a slightly easier application process, probably took me a day to write. Due to funding, however, the grant would have to be spread over three years. Although writing the grant didn’t take too long, determining which collections I would have digitized first took longer. I had to stay under $10,000 a year for digitization, so there ended up being a lot of math involved. I ultimately decided on what our most requested items were, what needed to be digitized due to preservation, and also what I thought would be of interest to our users even though they hadn’t been requested. In the 1990s, the former head of the Archives had several films transferred to VHS and mini-DVs. These films were scanned high resolution for their day; however, they are still on magnetic tape. Since people can view them in the Archives if requested, I decided that these ones would be digitized in the third year of the grant.

I was originally turned down for my first CLIR RAR grant, but I made the necessary changes and resubmitted the grant. It was accepted and was 1 of 20 applications awarded out of 77. My grant to the Atwood Foundation was also successful. 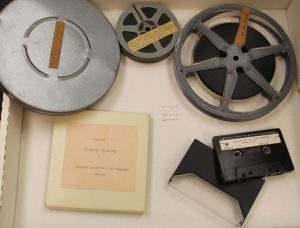 Items to be digitized under CLIR RAR grant.

I sent the materials to our vendor and started with the items under the Atwood Foundation. I was really excited when we received the digitized files of the materials. I plugged in the external hard drive immediately. It was amazing to be able to watch and listen to materials that have been inaccessible for years, and I am happy these are available to our users now as well.

The Atwood Foundation grant has been completed. There are about 70 audio, video, and film available on our YouTube channel, UAA/APU Archives and Special Collections. The rest of the items are available in our Research Room. We also recently received the digitized video that was completed under the CLIR RAR grant and the first materials are online.  Below is a list of the collections in which materials were digitized.

Collections with materials digitized with funding provided by the Atwood Foundation:

Collections with materials digitized with funding provided by the Council on Library and Information Resources Recordings at Risk Program: