Home Arrangement and description Not Found in the Other 49: The Ron and Penny Zobel Papers

Not Found in the Other 49: The Ron and Penny Zobel Papers

A guest post from our summer intern: Anna Leinweber. Thanks Anna!

As the summer intern visiting Alaska for the first time, I expected to learn many things about the state and its history while here. My expectations were that I would learn a great deal about Alaskan life and culture; things involving the outdoors and nature that is unfamiliar to me. What I did not expect was to work with papers from such a unique Supreme Court case as the Zobels’.

As a person born and raised in Louisiana, I have a special appreciation for unique state things. Due to things such as Huey Long legends, and the fact that Louisiana attorneys learn Napoleonic Civil Code instead of English Common Law like the other 49 states, I always assumed I knew some fun facts about peculiar legality. Again, Alaska serves to show me more! After all, the Permanent Fund Dividend yearly allocation of money to all state residents is truly different from the other 49. I’ve left the realm of Parishes and landed in the world of Boroughs.

In this world of Boroughs, the Zobels, Penny and Ron, also found themselves arriving at an interesting time, especially considering they were both lawyers. The late 1970s, the Trans-Alaska pipeline system, and Governor Jay Hammond spawned the idea of the Permanent Fund Dividend, in which the state would distribute money on a yearly basis to each resident. Wonderful, right? Only there was a hitch. Governor Hammond’s original PFD plan was to pay residents different amounts based on the number of years they had lived in Alaska since statehood. Enter Zobels. Penny and Ron quickly noted the unconstitutionality of such actions and filed suit, claiming Governor Hammond’s plan stood in contrast to the 14th Amendment. The case made its way through the courts of Alaska, and finally to the United States Supreme Court, which ruled in favor of the Zobels. Henceforth, all Alaskan residents can annually claim a PFD check for an equal sum.

Just like Huey Long’s assassination stands in equal lore as his “Share Our Wealth” platform, the Zobels’ reputation and image amongst their fellow Alaskans rivals their case in the highest court in the land. Our collection of Zobel papers is not limited to legal research and case documents. There is letter upon letter from Alaskans of all ages criticizing the Zobels and denouncing them as “Cheechakos,” or short-term residents only seeking the benefit of Alaskan boom times. Many newspaper clippings from the Anchorage Times and Anchorage Daily News show the couple in a similar light. Thankfully, there is hope left yet, and the collection also contains letters of support and encouragement. The case was even used as an educational piece for a National Geographic project highlighting the Judicial Branch of the U.S. government, which the archives also has within the collection. 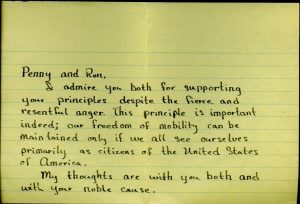 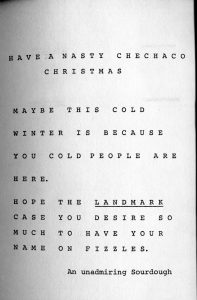 While Alaskans might have been divided on the dividend in the early years of the court battle, both the Zobels and the state were able to move forward. Ron served the state as Assistant Attorney General for a number of years, and Penny remained in private practice. The residents of Alaska can apply for their PFD check and enjoy their state money each fall, which continues to help alleviate the higher cost of living here.

The Zobels, although largely unknown to newer Alaskans, exemplify the spirit of this distinctive state in their willingness to separate from the norm. Through my time here in Alaska, and especially through processing the Zobel papers, I’ve learned much about striking out to defy the status quo. The Zobel papers are a testament to the tiresome, but worthwhile work of daring to be different. As I prepare to leave Alaska, I have a renewed appreciation for taking up a cause for what one believes in and seeing it through in the face of great opposition. All in all, the Zobel collection has much to teach us, not just about legal battles and the PFD, but about what it means to champion something that no one has before.