When I took over as head of Archives and Special Collections in June of 2007, I had a lot of goals for the department. Most of those were user-focused and revolved around simplified access to collections. One of the things on my target list was our finding aids.

The original collection description for the Margaret Heller papers. Click to see a readable version.

Our finding aids, while having the basics necessary to an archival guide, weren’t very navigable. Sections of the guide weren’t labeled, so people coming upon the guides in a web search wouldn’t know what the numbers on each line item in a container list meant. And it could vary: sometimes it was a box, sometimes it was a folder, sometimes it was an item. The guides were full of abbreviations that might not mean anything to a researcher and judging by our reference requests often didn’t: people didn’t know that cu. ft. was short for cubic foot and worse, that it was some sort of hint to them as to the size of the collection. (.2 cu. ft. = small, 123.4 cu. ft. = large collection, probably with 120 boxes of material or more). How about the elements that simply weren’t in those inventories: like who owned the copyright to the material in the collection? Or was any of the collection available online? What does that HMC-0398 thing mean anyhow? Add in some inconsistent numbering systems for the inventories such as one 18 box collection that had 16 boxes numbered 1, and I was done with that.

One of the first things I did in the summer and fall of 2007 was to build a finding aid template and the guidelines for filling it in. I don’t know if you’ve noticed this about archival research, but unlike MARC records for library cataloging, there is no national or international format standard for archival description. There’s a lot of standards around archival description content that are nationally accepted like “use undated, not n.d.” and a creator name should follow “this construction” and a scope and content note should include “this type of information”, but there’s nothing that says “this piece of information shows up in this order in the finding aid.” So in building ours, I wanted to both meet the currently accepted national content standard of DACS (Describing Archives: a Content Standard) and to also use a format for the guides that would make them easily exportable into one of the national databases of archival holdings were we to eventually be able to join in on one of those.  Logically the format standard for us to use was the one being promoted by the then Northwest Digital Archives (now ArchivesWest) so we took that, renamed and re-ordered a few things to meet our specific collection needs, and we started to use that for any new collection description we were doing. Which was great! Our new finding aids were looking terrific and even if they still presented some challenges for researchers at least we were able to provide much quicker reference assistance because we could navigate things faster. And no more than one Box 1 per collection! Plus if we were ever able to join up in one of those national databases of archival holdings, the sections of the finding aid were granular enough that a mass export to a different format would be more easily achieved.

But we still had a problem. About 750 problems, actually. All those old finding aids that had been created prior to fall 2007? Were still in the same old format. Were still as non-navigable. Still had all those references to cu. ft. And nobody ever recognized that the HMC- reference was the call number for the collection. Not to mention all those unlabeled numbers elsewhere in the collection: were those folders? Items? And how was the user supposed to know that 30 photographs from the collection had been digitized and placed on the Alaska’s Digital Archives?

That’s a long way of getting to the point: which is that I hate legacy finding aids. They’re a constant drain on you when you’re doing reference, they’re a challenge to researchers, and though I’m not terribly obsessive about these things, having multiple formats for finding aids is just a messy way of doing business. And so in December of 2007, we embarked on a legacy finding aid conversion project. A bit too Pollyannish of me, I admit, I thought this would be a pretty short project. I knew that we’d have to massage a lot of the data in the existing guides to fit our new standard, but I didn’t count on a few other things. Like as we were going through one of these, we might spot serious errors in the guides. Things that weren’t described as they could be. Things that never should have been appraised as archival. Boxes that were half empty for no reason. (Did I mention we were also getting low on vault space?) Records arrangements that were far more complicated than they needed to be. Materials that were on the shelf but not reflected in the finding aids (more than a few boxes sitting there labeled “miscellaneous” or worse “moldy” or even worse “nitrate film.” Did I just say something about things that weren’t described as they could be?) Recent or not-so-recent additions to the collections that hadn’t been added to the finding aid. Plus we were getting more reference questions, more new collections, we wanted to keep adding materials to the Alaska’s Digital Archives, we wanted to put a dent in our very large undescribed backlog, and the very realistic fact that all of us could only do so many of these conversions before we wanted to go screaming into the vault. So the legacy project kept looming over us.

We did a few concentrated bursts of work on it. One time I made the crew a deal: get 60 conversions done in one week and I’d make baklava for everybody. Okay, so we chose the simplest of the conversions and yes, I did my equal share, but we even went over that number. Who knew homemade baklava was such a motivator? But this conversion project really felt like the project that would never die. 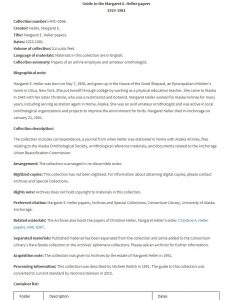 The updated version of the Margaret Heller papers inventory. Note how all the sections of it have labels! Click to see a more readable version.

Only it did die. Yesterday. As of today, we have no legacy finding aids.

Yes, there was cake. 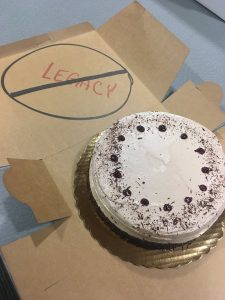 Are there more finding aid changes to come? No doubt. We’ve already amended the template a few times since late 2007, like adding a field about access to born-digital materials for the collections for which it is relevant, and we’re seeing more and more of those these days. Moving it into a database format that would allow for easier searching of specific fields would be nice. But now, right now, upgrades and migrations just became a whole lot simpler.

Thanks to all the student workers, volunteers, and interns who chipped away at a section of this huge project, and to all the archivists who put even bigger holes in it: Nicole Jackelen, Kathy Bouska, Mariecris Gatlabayan, Megan Friedel, Veronica Denison, Jay Sylvestre, and Gwen Higgins. Look what we did! You should be proud.