Did you know it’s Pet Peeve Week? (We didn’t, but we do now). So in that spirit:

Okay, we admit, most of these are pretty low on the annoyance scale. But we were commiserating over a few collections recently and slowly the conversation got funnier and funnier as we tried to outdo each other. Imagine, if you will, the Monty Python sketch with all the old men sitting around complaining about their childhoods: “Well, now, we had it tough” only with three archivists sitting around and looking at an old box with mouse droppings in it. [An incoming box. We try not to have stuff like that in the vault.] So here’s a few that, while one incident does not an annoyance make, after a while start to add up:

Arlene: I have two. The first? 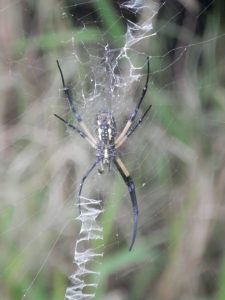 Spider in a swamp outside of New Orleans. This is one of the oh-so-many reasons that, though I do love New Orleans and Lousiana, I’m pretty sure I could never live in a climate that grew 2″+ size spiders. The hair on my arms is standing on end just thinking about this spider.

I’ll get to the other some other time, maybe later in this post if I can get past the spiders. I’m seriously freaked by spiders. I’m not a screamer, I promise. And my co-workers know that about me. Which might explain when a few years back I was sitting at a computer in a research room and a spider ran over the keyboard and my fingers, my yelp (okay, squawk, screech, shriek, scream, vocal embodiment of utter and complete terror) brought the two male archivists who were working with me to my side in a matter of nanoseconds. I think one of them may have vaulted over the four-foot-high room divider to get to me and he wasn’t exactly a vaulter-type. Even dead spiders give me the wiggins, which you can imagine is a professional hazard when unpacking boxes of records that, shall we say, are often stored in basements, attics, sheds, crawl-spaces. I still do it, but eeee.

They seem innocent enough, right? They may be an easy and convenient way to keep stacks of paper, too large for staples or binder clips, together. However, over time they deteriorate into a sticky, brittle mess. So, after 20 years, your once supple, stretchy rubber band looks like this: 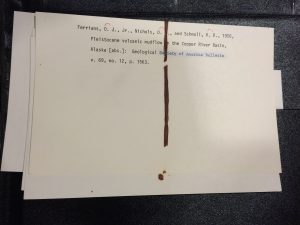 I once worked on a collection in which every grouping of documents was bundled together using rubber bands. It was pure torture. The deteriorated rubber bands had effectively glued some of the documents to each other, making them impossible to separate while avoiding their mutual destruction. Needless to say, when I encounter still stretchy rubber bands in collections, I remove them, even if I don’t always remove every paper clip I see.

So, why does this happen? Science! In its natural state, rubber is a soft, sticky substance made up of chains of a polymer called polyisoprene. To make the substance tougher so it can be made into useful things like tires (but not rubber bands because they are evil), it is treated with chemicals, such as sulfur in a process called vulcanization. This creates cross-links between the polymer chains that strengthen them. The combination of ultraviolet light and oxygen creates free radicals  that break down the chains into shorter pieces, returning the rubber to something like its original, sticky state. Unfortunately, this causes the rubber band to stick to whatever it was wrapped around. The radicals later form new, shorter cross-links, which turn the rubber brittle and crumbly. Even if you manage to scrape the bits of brittle rubber from your one-of-a-kind document, full of archival value, you will be left with an ugly brown stain. What do you do with all of the rubber bands you pull out of collections? Why, shoot them at your colleagues of course. [ed. risk management note: no, she doesn’t.]

Veronica: Folders that are not folded along their scores.

Most folders come with scores–little indentations that you can bend to adjust the bottom width of the folder depending on how much paper is in it. Sometimes the folders come with three scores, sometimes five. (I personally prefer the folders with five scores). These scores, when folded, allow for the documents in the folder to be nestled inside the folder. And they provide a nice, flat bottom for the folder, so when it goes in a box, it doesn’t slip. And the bottom of the folder will rest perfectly along the bottom of the box. As you put more folders in the box, and if you keep folding them appropriately along the scores, the folders will be perfectly snuggled together. They won’t, or shouldn’t, fall or slip underneath one another. 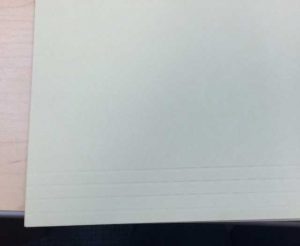 But sometimes there is an occasional collection where the folders have not been folded. Or if they have been folded, not along the scores, which truly boggles my mind. And then you have 100 sheets of paper inside a folder, that is pointed at the end. So the edge of the paper is not flat along the bottom of the folder. This is what that looks like:

The folder meets in a point, creating a triangle effect. 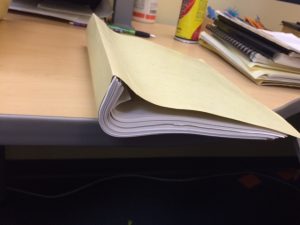 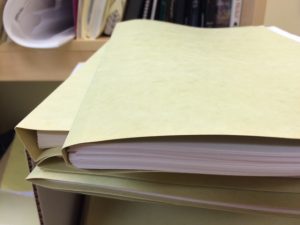 So please, if the folder has scores, use them if applicable. Because what is worse than folders that are not properly folded along the scores? Curved documents. Don’t even get me started on that.

And in closing, Arlene again: Miscellaneous. 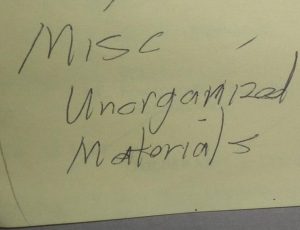 Is there possibly a more annoying word in the lexicon for a bunch of professionals tasked with describing materials in order to make them accessible? Want to make sure somebody never looks at a document again? Put it in a miscellaneous file. I have hunt-and-kill days where I search through our website looking for finding aids that include the word.. Anymore, its presence usually comes from the original file labeling: everybody who works here is pretty careful not to use it or if we do, because we’re quoting the original file label, we’ll usually try and follow that with something more descriptive of the contents of the file. By the way, the box I found with the above label turned out to contain all duplicates or non-archival materials so it’s gone now.

We realize that some of our colleagues may regard this as an opportunity to start setting boxes on our desks with bent paper, wrapped in old rubber bands, labeled miscellaneous. Go ahead guys, but leave the spiders out. Trust me, there’s nowhere far enough to protect your eardrums.