Home Classes and tours What we did this year, part 3

What we did this year, part 3

The third in our blog posts on our annual report for the academic year ending in August 2015 [ed note: fixed from 2014]. This one is probably the nearest and dearest to my heart: a look back at our reference numbers.

Sometimes, in the focus on getting collections described and accessible, it’s easy for people (including us) to forget that the reason we do all of that is so the material can be used. And it’s really important that we pay attention to how and when it’s used, because that can help drive other decisions we make, including what to spend more time on describing. So here’s some numbers from this past year on how the access side of the work is going.

Those are pretty dull numbers without some context. So let me provide some. Several of those numbers are down. The previous year? We handled 283 requests, so a decline of about 19%. The use of rare books and theses were halved. Looks abysmal, right? Not a good direction for people dedicated to access.

And even better, especially for an archives within a university environment, a substantial proportion of that doubled time was time spent with and by UAA and APU students working on research projects related to their coursework.

So color me incredibly pleased with these results. And since numbers don’t really tell the whole story, how about these public uses of our materials? Copies of photographs from our collection were used in teacher resource guides created by the National Park Service, a couple of documentaries, reality tv shows, a book on the lost villages of the Aleutians, by actors preparing their parts representing various Anchorage notables in the Anchorage Cemetery tours that took place over the summer. A few of our photos were used in an art mural at the Mountain Village School (you might have seen something about that on our Facebook and Twitter feeds.) Ruth Schmidt and Dove Kull were both nominated to the Alaska Women’s Hall of Fame this year: the proposers used their collections to build those nomination packages.

And one last set of numbers and context, just because we occasionally get asked. What were our most commonly used collections? Well, I can tell you that the top one in that list, Charles Lucier, is directly related to those student uses mentioned above. One of our anthropology classes focused specifically on the Lucier papers. He was an anthropologist who worked mostly in the Seward peninsula area. The guides the collections are linked in the list below, just in case you’re curious about what the collection contains and what might be of interest to you!

It’s interesting, now that we’ve been collecting these numbers for a few years, how collection use ebbs and flows. Or doesn’t. For the past few years, Christine McClain, Russ Dow, Walter Hickel, and Alan May have been in our top 10 most used collections. Charles Lucier was a new entry this year and it has entirely to do with that anthropology class set of assignments. Talley comes and goes from the list, often either for his role in building the various WWII era air fields in the Aleutians or some cultural heritage materials he gathered in Nicaragua while stationed there. In past years Edwin Glenn papers are a standard (who could resist this photo?) 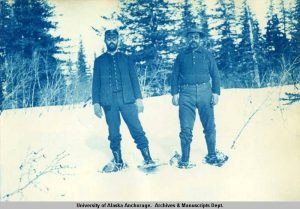 but though the use levels of that collection remained the same this year, the increase on the others just bumped it down a little on this list.

So thanks to all of you who conducted research with our archival holdings this year: you are the reason we do what we do!