Our current exhibit in the great room of the Library is all about food in Alaska, with items from the Rare Books collection including cookbooks from the state. After the success (or at least entertainment value) of last year’s Convalescent’s Banquet, we in Archives and Special Collections felt that there was no better time than now to host our second annual Archives pot-luck.

Before the exhibit was installed, we made the cookbooks available for our colleagues to choose and copy recipes, and opened the event up to the entire library. The cookbooks included several featuring traditional dishes from Alaska Native cultures, a few on wilderness cookery, one devoted entirely to potatoes, and a gem of a book from 1948 titled Out of Alaska’s Kitchens and put out by the Alaska Crippled Children’s Association. The majority of those who participated in the event chose dishes from Out of Alaska’s Kitchens, which as you might expect from a cookbook of that era, contains a multitude of recipes composed almost exclusively of canned goods with names like “Rice Flamboyant”. 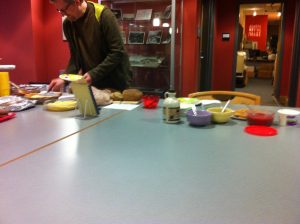 The whole spread, plus Kevin.

Arlene made two dishes for the pot-luck, one that was actually meant to taste good, and another that just sounded so wrong she absolutely had to try it. Her more serious contribution to our little feast was Quaker Oats Bread from Out of Alaska’s Kitchens. The vast majority of pot-luck attendees declared the bread delicious. Arlene, however, was not impressed and deemed it “too dense.” 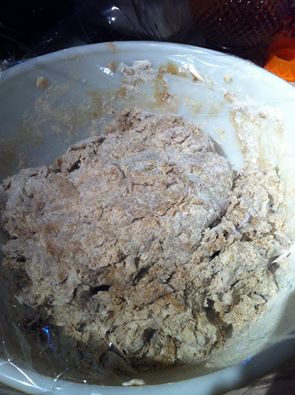 As a joke, Arlene made Dillworth Pudding, also from Out of Alaska’s Kitchens. It is basically a bread pudding made with tomatoes and brown sugar, which sounds absolutely horrific. After putting our archivist research skills to the test (i.e. googling), we discovered that Dillworth pudding is named (complete with spelling error) after the Dilworth Hotel in Boyne City, Michigan, which made the dish famous. This version of the recipe states that you can use either tomato puree or Campbell’s tomato soup. Arlene decided to go the Campbell’s soup route, although I am not sure using tomato puree would have improved the results. 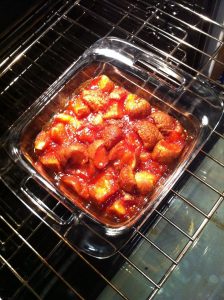 Dillworth Pudding fresh out of the oven.

The Dillworth pudding received the following reviews from those brave enough to try it:

Dawn: “This reminds me of something.” Arlene: “Nenana?”

Arlene also did research into where the Municipality of Anchorage gets its water. Turns out the majority comes from Ship Creek, not Eklutna Lake as is commonly believed.

Veronica brought the inexplicably named Irish Lemon Pie from Out of Alaska’s Kitchens. What about it exactly makes it Irish? None of us could figure it out. In any case, it was similar to a lemon meringue pie, without the meringue. The filling had a lovely, tart lemon flavor. However, as it sat out on the table it became runny. Given that the recipe came from the same book as the Dillworth Pudding, Veronica was probably not to blame for this.

No Alaskan feast would be complete without something involving salmon, so I decided to make a salmon quiche from Qaqamiiĝux̂: Traditional foods and recipes from the Aleutian and Pribilof Islands. I made some minor tweaks to the recipe, such as using butter instead of margarine and adding a little black pepper. I also mistakenly bought heavy cream instead of light cream, which is what the recipe called for. Despite the heavier cream, one guest remarked that it was lighter than most quiches she’s had. 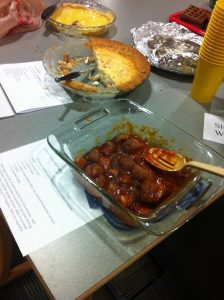 Irish Lemon Pie, Salmon quiche, Dillworth Pudding and Chocolate waffles. Note how much of the pudding is left.

Greg decided to forgo the cookbooks from the exhibit and made sourdough waffles using his tried and true recipe. Longtime residents of Alaska are often referred to as sourdoughs in reference to the sourdough starter that early settlers carried with them when they came to the state. The dough was often used to make hotcakes. The waffles, while slightly less traditional, were also delicious. Greg provided blueberries, yogurt, and maple syrup to accompany the waffles. Kevin brought a rhubarb compote, which was delicious on the waffles. 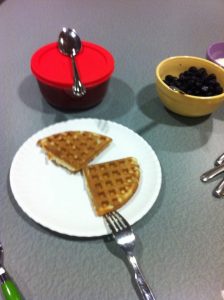 Sourdough waffles with all of the accoutrements.

Daria brought Golden Rice, yet another dish from Out of Alaska’s Kitchens. While the combination of rice, carrots, and cheese sounded less than appetizing, this ended up being one of the most popular dishes at the pot-luck. One participant remarked that the grated carrots lent a floral quality to the rice.

This recipe came from The Fiddlehead Cookbook, which was not in the exhibit, but was put out by the Fiddlehead restaurant, which was located Juneau. So, still in keeping with the Alaskan theme. The salad provided some much needed veggies in an otherwise carb-heavy meal. The dressing, which was also from the same cookbook provided a wonderful complement to the salad.

These were basically waffles made with brownie batter. What more could you ask for?

Even though Jay moved on to a new job since the Convalescent’s Banquet last year, we wanted to include him in the sequel. Arlene gave him the choice of two recipes, both from Out of Alaska’s Kitchens: Rice Flamboyant and Alaska Lunch (which inspired the title of this post). Jay chose the Rice Flamboyant, which is made as follows:

Steam 3/4 cup of genuine long grain brown rice until nearly done. Place this in a casserole with one jar meat balls and gravy. Mix in 1/2 pint chopped ripe olives, 1/2 jar whole pimientos cut in long strips, and some of the liquid; 1 can mushroom soup with about 1/3 can of water or more and a little salt. Bake about an hour, at 350 degrees, until it starts to cook and then at 300 degrees. The addition of celery makes this dish very tasty. Leave out the meat balls and you have a vegetarian meal that tastes as though it had meat in it. 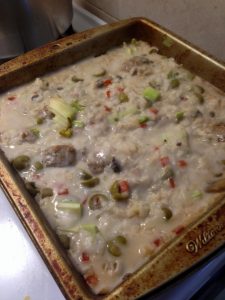 Jay sent us this appetizing picture of the result.

Arlene commented, “That looks like something you’d find on the sidewalk in the French Quarter after Mardi Gras.”

Jay’s wife, Kelly referred to the dish as a “Salt. Bomb.”

Overall, the pot-luck was a success, meaning that the food was actually edible, and it was even possible to make a balanced meal out of the offerings. Especially if you consider the Dillworth Pudding a vegetable as the recipe suggests.