Below is a breakdown of assigned task areas each student mentioned in this blog post worked on during the course of the class. Each task area corresponds with a section of the Charles V. Lucier papers.

Brian, while working with Lucier’s hand written field notes, encountered very detailed descriptions of a large number of artifacts found at excavation sites. Lucier often made sketches of findings, locations, and maps. For instance, he included descriptions of four types of spears and completed sketches to go with each. At one site, Lucier sketched an adze which he described as a beautiful piece.

Paul reviewed the correspondence with Ernest (Tiger) Burch Jr., which included discussion on inter and intra tribal conflict. This was particularly relevant because we read Tiger Burch’s article on the Inupiat and the Christianization of the Arctic Alaska. Paul also reported correspondence with Lorraine Donaghue from the University of Washington on doing transcriptions of films and recordings of folk songs, music, and dances.

Andrea worked with general correspondence including many Christmas cards and thank you notes. Much of her material related to art and art dealing. Some of the correspondence written by Elden Boolowon provided information about carvings and their prices. Andrea also read letters written by Norma Urbahn de Castilla regarding art galleries, such as the Green Earth Studios.

Alexandria reviewed the genealogical information and obituaries in the collection. She found sketches of family trees developed with information provided by Jenny Mitchell and her daughter, Della Keats. These women are key to much of Lucier’s translations and narrations. Della Keats was a well-known Alaska Native healer and mid-wife. She was known to treat anyone regardless of ethnic background and to generously share her knowledge and information. Some of the family trees are written in the Iñupiaq language. Although the document titled “Deering Family Histories” is not in tree form, it may relate to Lucier directly through his wife Grace, and it also includes information about Robert Mayokok, the well-known Iñupiaq artist.

Nicole covered family correspondence and most of the documents she reviewed related to daily life, family illness, and finances. She found that Lucier would take meticulous notes  while he spoke with others on the phone. Some of Lucier’s family members would also take notes while on the phone with him and would send him their copies, this way he could document what was said during the telephone call. There are also numerous holiday cards, birthday cards, and personal letters in the collection, which provide insight into Lucier’s personal life. 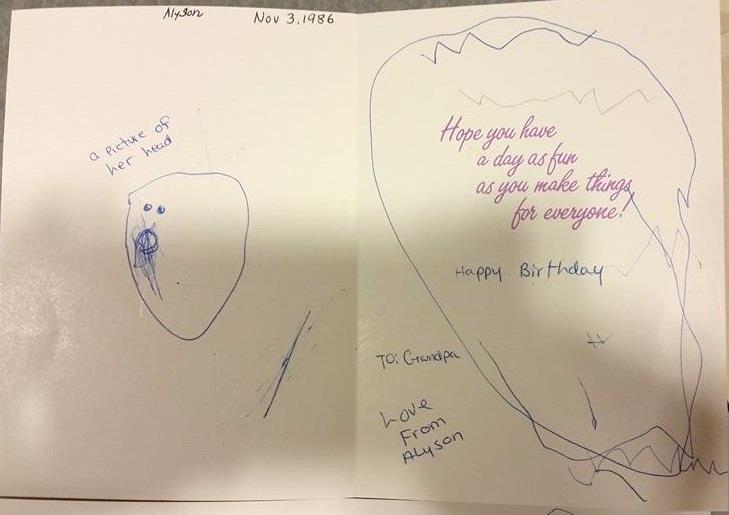 Birthday card to Lucier from his granddaughter Alyson with some of her first artwork. Box 3 , Folder 34.

Sydney also worked with correspondence. One letter she found was from Pauline Barr regarding research done in 1949-1950 at the Deering archaeological site. The letter explains how the site was handled, methods used, conditions of the artifacts collected as of 1998, and information regarding museums where artifacts are held. Lucier suggested that Pauline and other Elders write the Danish National Museum and request that they finish and print the Deering Qargi Report. This correlated with our in-class discussion of issues related to repatriation as well as the process that led to NAGPRA in 1990. 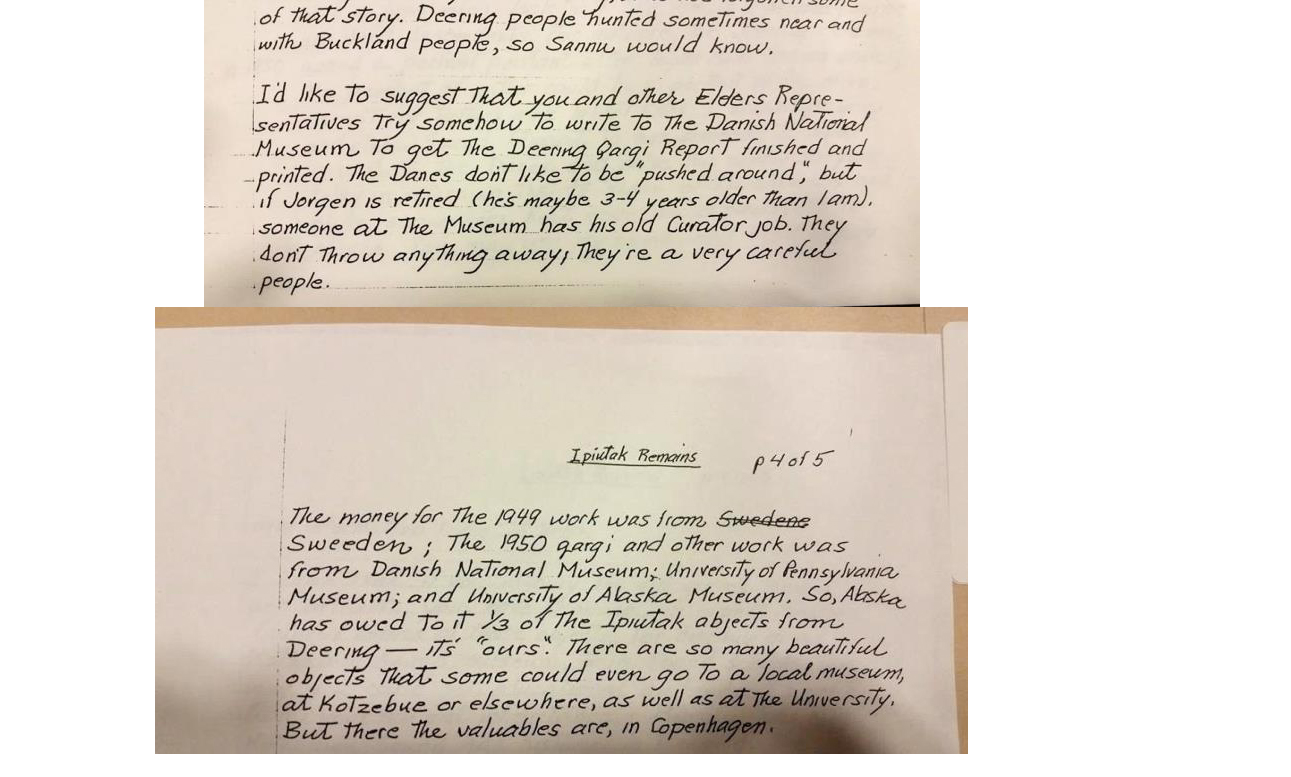 This is a section of the 5 page letter to Pauline Barr suggesting that she and other Elders write the Danish National Museum to request they finish the Deering Qargi Report and return the materials collected from the site. Box 2, Folder 15.

Jana covered business and educational documentation, which allowed her to learn about Lucier through the numerous identification cards, employment records, tax information, and records pertaining to buying and selling of Alaska Native art. She located a certificate granting Lucier the right to teach after one year of training at Karluk School. She also discovered information about various carvers and Alaska Native artists, and was able to assemble valuable information pertaining to Alaska Native art history. Lastly, Jana’s selection includes information Lucier became privy to while he worked for the Alaska Department of Fish and Game. The position he held provided him access to many of the remote communities in Alaska. Lucier also described health ships which were traveling public health clinics that provided health-care services to some coastal residents of western Alaska.

The memo stating Lucier had no practice teaching but 17 semester hours in Education. Box 3, Folder 53.

The teaching certificate granted to Lucier entitling him to teach at the public school in Karluk from 1952-1953. Box 3, Folder 53 .

Jeff worked with photographs. One interesting photograph was taken of a 12 year old boy named Ole Larson, who discovered the Deering Qargi site and was asked to join the excavation. Jeff reported images of the Juneau Ice Field Study done with Fred Milan of UAF and Jorgen Meldfoard of the Danish National Museum, whom the Iñupiaq nicknamed “the Pipe”. In 1949, at the beginning of his career, Lucier worked as a schoolteacher in Karluk. This period is represented by photographs of the BIA school house with children holding signs to document the year.

The richness and variety of records contained in the Lucier collection can provide information for a wide range of projects. We will finish the research and pull together information for the collection guide, and each of us will provide a short, blog-style report about our section of the collection. All of our work will be available on our research website by the end of the semester.