This blog post is the second in a series of three written by guest blogger Alyssa Willett. Part 1 describes the work completed in the Archives by UAA’s Ethnohistory of Alaska Natives course during the Spring 2015 semester.

Below is a breakdown of assigned task areas each student mention in this blog post worked on during the course of the class. Each task area corresponds with a section of the Charles V. Lucier papers.

As part of her work in Lucier’s collection, Josie read field notes from the excavations and surveys Lucier completed with Helge Larson, an archaeologist who worked in Point Hope with Froelich Rainey and J. Louis Giddings. Josie noted that Lucier spoke to many Iñupiaq informants about where to find sites and kept detailed lists of survey findings. He also expressed how finding human burials and excavating human remains at an Iñupiaq site weighed heavily on him. This provides us an insight to Lucier’s personality and character, particularly as this type of concern for, and reaction to, human remains was quite the opposite of the approach expressed by many prominent archaeologists of his time. Josie’s section is rich in data and information. Besides detailed descriptions of objects, Lucier also wrote of Tuberculosis and the 1918 influenza contributing to the relocation of the Native village of Kawerak.

Lucier’s sketch (in the left margin) of a Tupilak, half seal and half man. From Box 1 Folder 1 of the Lucier papers. 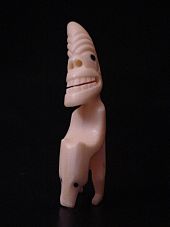 A Tupilak, half seal and half man.

Ashton reviewed the photographs in the collection. The photographs contain images of many archaeological sites excavated by the aforementioned Helge Larsen. There are photographs of Deering village, Iñupiaq structures, and Iñupiaq seal and beluga hunting sites. Lucier provided detailed information about these sites with the photographs. Moreover, these photographs correspond with Lucier’s diaries Josie was reviewing.

Helge Larsen and Fred Milan during the Deering Qargi excavation in 1949. Box 5 , Folder 4.

While looking at Lucier’s ethnographic notes, Kyle found the documentation of Urban Natives United (UNC), an Alaska Native dance group founded by Lucier. The collection includes the names of UNC performers (including Lucier), names and types of dances they performed, and pictures of dancers in the Alaska Pioneer. The UNC business documents in the collection comprise of a constitution, membership forms, names of members, and the text of the song and dance performed at Kotzebue. The same newspaper also has an advertisement about a flu vaccine which is interesting because it correlates with Josie’s information on the influenza outbreak. Kyle also worked with stories and encountered information about tattooing. Tattoo practice became an overlapping theme between Kyle, Colin, and Sam as they were all reading about Alaska Native stories and initiation rites.

Sam’s section on the stories in the collection mainly contained origin stories that touch on the culture of the Upper Noatak people. Many of the stories are repeated in different places of the collection. For the most part, they are narrated by Jenny Mitchell and translated by Della Keats. Some of the stories describe initiation and rites of passage, such as puberty, and provide an explanation on social expectations and how participants need to move into a new social role.

The information Colin found while working with Lucier’s ethnographic notes about traditional tattooing was shared with Lucier by Ina Tieplemain and Mary Morris. While both men and women had tattoos, women’s facial tattoos were placed on the chin, and for men on the corners of the mouth. Facial tattoos were believed to protect one from evil spirits and were also used for beautification. Arm tattooing was also common for beautification. While tattooing is a cross-cultural phenomenon, patterns, design, placement on the body, and meaning are culture specific and they express various forms of identity.

Information about tattoo practices given to Lucier by Mary Morris. Box 7 , Folder 49.

Please continue onto Part 3 of the blog post series to read more about what the students found.