This is the first in a series of three blog posts written by guest blogger Alyssa Willett. The blog post will introduce the work completed  in the Archives by UAA’s Ethnohistory of Alaska Natives course during the Spring 2015 semester. 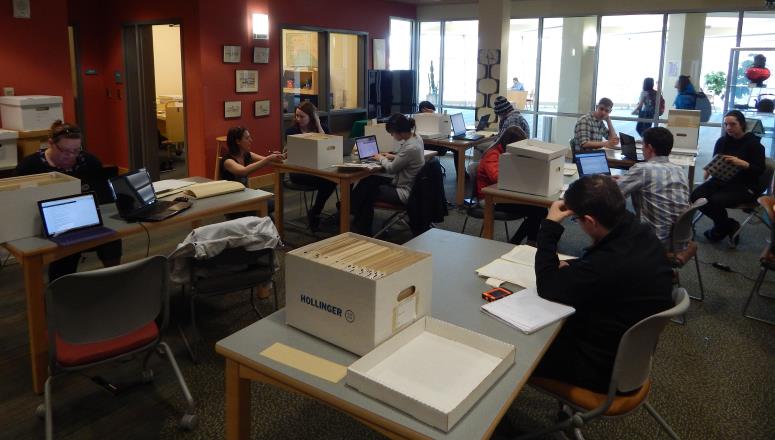 As a part of UAA’s Ethnohistory of Alaska Natives, an upper division course taught through the anthropology department by Dr. Medeia Csoba DeHass, students updated the collection guide for the Charles V. Lucier papers held by the Consortium Library’s Archives. The students provided item level metadata for documents, photographs, and other records in the collection. The clearest way to understand the objective of this project and the immense value of the work is to begin with a picture of who Charles Lucier was. Next, learning about ethnohistory as a discipline will help make sense of how each student contributed to this collaborative project. The Lucier collection is dated 1903-2009 and is divided into two parts. Part 1 contains the records given to the Archives by Lucier, and Part 2 contains the records given to Ernest S. (Tiger) Burch Jr. by Lucier that were then donated to the Archives by Burch’s estate upon his death.

Charles (Charlie) V. Lucier was a man who played many roles and kept detailed records about his diverse life experiences. Lucier was born in Kansas and moved to Anchorage at the age of 15. He studied at the University of Alaska Fairbanks from 1943-1945 and then again from 1947-1949. Lucier was drafted to the Air force and stationed at Elmendorf Air Force Base. After completing his service and earning a Bachelor’s of Arts in Biology, Lucier was selected by Ivar Skarland and J.L. Giddings Jr. to assist in an archaeological survey of the Seward Peninsula. It was during this time that Lucier began keeping detailed ethnographic records and excavation field notes that are now available to the public as part of his collection. During his time as an anthropologist and archaeologist, Lucier obtained information regarding Iñupiaq traditions and oral histories as well as audio recordings of traditional songs and dances.

Charles Lucier was a family man, biologist, archaeologist, published author, social activist, poet, artist, and life-long student. The materials we reviewed are indicative of his many passions, talents, and achievements. The varied nature of this collection is perfect to familiarize future ethnohistorians with the discipline of ethnohistory.

“Ethnohistory is an interdisciplinary field that studies past human behavior and is characterized by a primary reliance on documents, the use of input from other sources when available, a methodology that incorporates historiography and cultural relativism, and a focus on cultural interaction (Barber and Brendan, 1998: 12).”

Our class was made up of students majoring and minoring in anthropology, Alaska Native studies, history, and sociology. Each of us was responsible for extracting data from a specifically assigned area of the collection which we would then analyze and input the information into the working copy of the collection guide. Our ultimate goal was to make information available to communities that Lucier studied and researchers anywhere in the world, as well as to present the data in a format that increases efficient use of research time.

My name is Alyssa Willett and I am a graduate student in the anthropology department. My job was to take all the other students’ weekly entries, edit them, and input them to the working copy of the updated collection guide. Ideally, I would find meaningful connections between different areas to synthesize into a more complete picture. In the beginning, this seemed overwhelming, but as the weeks went on and we all compared notes and stories, threads of connections and intersections came to light.

Parts 2 and 3 of the blog post series will contain information regarding what the students in the class found and the connections that they made to other parts of the collection.