Home Whimsy Somebody else’s trousers (who says Facebook postings are comprised of trivia?)

Somebody else’s trousers (who says Facebook postings are comprised of trivia?)

Since it’s a quiet day and we’re about to be closed for a little over a week for the holidays, here’s a piece of absurdity to carry you through.  From a letter from Fred Wildon Fickett to his fiancee Nellie Lord. 1885 March 11.  Fickett was about to leave on the 3-man Allen expedition through central Alaska via the Copper, Tanana and Koyukuk Rivers.  And amongst the  other things he felt it important to tell his future wife on the cusp of this expedition, he shared this with her:

We have canvass bags made to sleep in and painted on the out side so as to be water tight. Each man also has four blankets. I have a splendid pair of buckskin pants which I shall wear. They belong to an officer at Vancouver who tried his best to get on this expedition but could not so he asked me as a special favor to wear these pants with the condition that I would [give] him what was left of them upon my return, which I promised to do.

Now, I (this is Arlene) realize that this is a pretty strange item to share with you because I’m well aware that not everybody shares my rather strange sense of humor.  But it feeds into something that’s been percolating around in my thoughts lately.  I use Facebook a lot, personally.  It’s how I keep in touch with a lot of my friends at a distance.  Facebook and other social media networking sites take a lot of criticism along the lines of  “who cares what you had for lunch?”  And I’ll admit, I tend to feel that way about some of them myself.  But as my Facebook friend, high school friend, colleague Cheryl McKinnon argues much more eloquently than I could ever do, it’s the contemporary replacement for the water cooler talk for those of us who are separated by distance.  It’s how we keep in touch with each other, giving each other a glimpse of what we’re up to at any given point in time.  Okay, so maybe we’re not always saying anything terribly important or earthshaking but it’s how we connect and make ourselves real to each other over distances.  If you’re doubting me, re-read Fred’s letter excerpt above again.  Important? Earthshaking? Something he absolutely had to tell his future wife before he disappeared into the unmapped interior of Alaska with two other guys, none of which really knew where they were going for sure or what they might run into? Or truly if they might ever return? He’s telling her about a pair of pants he’s borrowed (and don’t even get me started on the request to return them post-expedition). 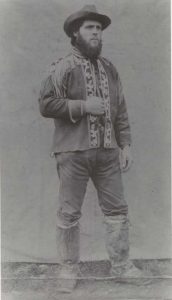 For centuries, we’ve understood that the way to keep a relationship alive at a distance is by keeping in contact.  And by talking about the trivia of life.  What we had for lunch, who we saw, what we’re wearing.  So the method of transmission has changed for a lot of us from handwritten one-to-one correspondence to a broader net and via electronic means, but it’s still the same old thing.  The media has changed, the method has changed, the content has not.

Well, maybe the content has changed a little. I ‘m not sure I’d admit via Facebook or Twitter that I was wearing borrowed pants.  For several months straight.  And if any of my Facebook friends ever do admit to such, I’ll just be grateful that I’m keeping in touch with them at a distance.  It’s probably for the best.

Oh, and the photo to the left?  That’s Fred, shortly after the expedition. A&SC has the Athabascan beaded jacket he’s wearing.  But not his pants. Thankfully.