What our researchers are producing

We recently learned about two great websites created by our researchers:

WWII Alaska: The Second World War dramatically impacted the Alaskan territory and all of its people. Explore firsthand stories from Alaska Native elders and veterans stationed in Alaska. Created by Holly Guise, an Iñupiaq historian from Anchorage and Unalakleet, and Assistant Professor of History at the University of New Mexico.

Madness Outside In: Morningside Hospital, American Psychiatry, and the Evolving Nation in the mid-20th Century: The project examines mid-20th century American psychiatry through a case study of the Morningside Hospital, which operated in Portland, Oregon from 1903-1963. Morningside was a private hospital contracted to transport and treat Alaskans. The site was created by two researchers from the University of Oregon: Professor Mary Wood, Department of English and Professor Kristin Yarris, Department of Global Studies.

In other researcher projects and products:

Megan Friedel, who was an archivist here a few years ago and who is now at University of Colorado Boulder recently published “Rough Sort of Way”: Edwin F. Glenn’s Photographs of the 1898 Cooks Inlet Exploring Expedition in Alaska Pacific Northwest Quarterly. We just got a copy and enjoyed reading it. Congratulations to Megan on the publication!

Tutorials to using the Archives 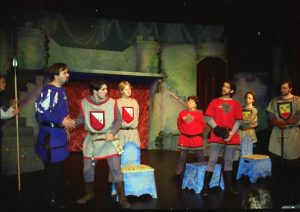 Actors onstage during an Anchorage Community Theatre production of Camelot 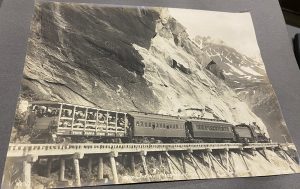 Carnival Civic Theatre “The Roar of the Greasepaint the Smell of the Crowd” program; 1973. EPH-0456

A guide to collections relating to the U. S. Coast Guard.

9 images from the Don Schwartz papers, HMC-1354-AHS. Totem poles in the Ketchikan vicinity and a few images related to the Don’s service aboard a Coast Guard buoy tender.

Inventorying audiovisual materials: Although we work to make all of our collections available to the public, some of our audio, video, and film recordings remain inaccessible because we lack the equipment to digitize them and playing them is detrimental to their long term preservation. While we have received grants to digitize some of these materials, we still have a long way to go before everything is accessible, and until now, we have not had a comprehensive list of audiovisual materials in our collections. Gwen is currently working on an inventory of our A/V materials to make applying for funding easier in the future.

Protecting digital archives: Arlene discovered that due to some system time-outs, some of our folders of digital materials hadn’t been fully transferred to our networked area storage when we set up that system a few years ago. The NAS is our preservation system for electronic documents. Good thing we hadn’t deleted the other copies yet. Arlene has spent many hours this month transferring the rest of them over before deleting the folders for good. We’re sure our Systems librarians will be happy to have the space back on the library’s main storage server.

Alaska’s Digital Archives metadata: In the 18 years we’ve been adding materials to the Alaska’s Digital Archives (23,118 items at last count) and with some changes to the software that runs the Digital Archives, we’ve had to change some of the ways we do our metadata. A lot of that metadata is what makes the items searchable, but some of it includes information about the rights status of items (if we know it) and other various changes that are a little more behind-the-scenes. That’s led to a ton of “legacy” metadata in need of amending. One of the projects within that is to combine three subject fields (Subject.tgm, Subject.lcsh, and Subject.local) into one field, because quite honestly, our users don’t care about the official cataloging source of each subject term. Arlene has merged all of the local terms and about half the LCSH terms into a single field (formerly Subject.tgm which is now just Subject), which has involved individually correcting 3000-4000 records so far. And while in there, she’s been fixing some of the other fields that have changed, like the dates fields, adding rights statements where possible, and a few other behind-the-scenes bits. As you can imagine, this has taken quite a bit of time. Will we ever get all of it fixed? Some of the changes that need to be made aren’t easily searched for, so the answer to that is “probably not.” But once we get a few of these big projects out of the way, we’ll correct the others as we see them.

Researcher time: We know sometimes when you walk by you don’t see anybody doing research with us, but we can promise, it’s still happening! In June we had nearly 90 hours of onsite researcher visits across the three weeks we were open for appointments plus a lot of time spent in distance and virtual researcher interactions (email, zoom consultations, phone). We actually spend a pretty significant amount of our time–as we should!–working with researchers, whether or not they can actually come in to work with the materials themselves.

Researcher appointment procedures: And last but not least, we’re making some big changes to how we offer research appointments starting in July. Hopefully these changes will make it a lot easier for folks to access the materials here in the Archives. Full details are on our appointments page but here’s some spoilers for those of you who don’t have the time to go look at it: expanded times available for appointments, appointments longer than 3 hours, and more simultaneous appointments available (up to 6 people at a time). Also a walk-in option (for those who can access the building) if we’re already open for pre-existing appointments. We still encourage folks to get in touch with us well in advance of their intended visit–especially if traveling to Anchorage–just to improve odds of finding an appointment time that works for you and us.  That appointments page also includes a link to our appointments calendar for the next two months. That calendar can be subject to change but hopefully it will give you a starting point as you think about planning a research visit.