To celebrate Public Health Week (April 7-13) we in the Archives decided to do a medical exhibit in the great room of the Library entitled “What Medicine Used to be” using rare books. One of the books was quite captivating: “The prevention and cure of disease; a practical treatise on the nursing and home treatment of the sick” written by George Henry Napheys and published in Springfield, Massachusetts by W.J. Holland and Company in 1875. The book includes the chapters, “Instructions on Prolonging Life,” “Rules for Avoiding Contagious Diseases,” “The Prevention of Decrepitude,” and “American Plants and their Medical Virtues,” just to name a few. However, one chapter: “Receipts for the Sick-table,” gave us in the Archives an idea. We decided to make some of the recipes, or “receipts” as the book calls them, and have a sort of pot-luck, or as it came to be called, a “Convalescent’s Banquet.” We opened the event up to others in the library, however only a select few were brave enough to take on the recipes of the past and only a few more were willing to taste them.

The banquet included Bread Jelly made by Jay, Barley Water made by Arlene, Vegetable Soup also made by Arlene, Cornmeal Gruel made by me (Veronica), Arrowroot Pap made by our student worker Christina, and Baked Tapioca with Apples made by Greg in AMIPA. Below are some photographs of the cooking process, along with the recipes.

“The barley water was a lesson in recipe tolerance. It started out straightforward enough: pour a quart of boiling

water over a few tablespoons of washed pearl barley. But then it went to: set near the fire for two hours. I have a fireplace at home, but I’m not sure when the last time the chimney was cleaned, so instead I just stuck it on the stove on very low heat, low enough not to simmer but enough so it would keep steaming. I think it worked. To me it mostly tasted like really weak lemonade (the lemons were added later) with kind of a bready finish. Not bad, exactly, just weird.” 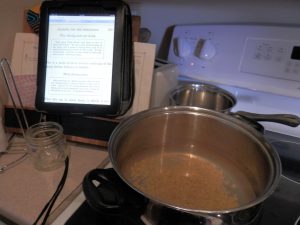 “The vegetable soup: When I think about vegetable soup, the four main ingredients usually aren’t potatoes, onions, bread, and water. Onions and water, sure, but not so much with the bread. Plus I had to consult a reference librarian to figure out what an 1885 Boston author might have regarded as an Irish potato. Turns out that the Champion was the major potato in mass production in Ireland after the famine and the encyclopedia he consulted indicated it was a floury variety, so I went with a Yukon russet as the closest equivalent. I suspect the starch levels were a little higher than most people would expect in a vegetable soup. I also chose to strain it before serving. It looked really disgusting prior to straining, but that wasn’t sufficient to strain since clearly visual appearance wasn’t a high priority for sickroom cooking based on the rest of the recipes I read (and saw). In my case, I decided that nobody would expect an invalid to chow down on that much onion, since that was the one ingredient that didn’t cook down to a liquid state.” 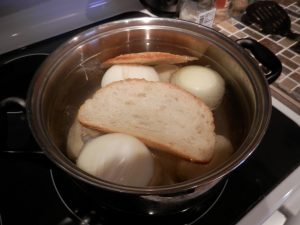 Beginnings of the soup 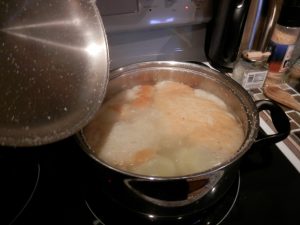 The bread is glooping into the soup

I added some salt to the water as the recipe suggested. Once it began to boil, I added the cornmeal. I stirred it for 15 minutes and had to keep adding boiling water to the pot. When it was finished, it tasted really bland, so I decided to add honey, lots of honey, to give it some sort of taste. 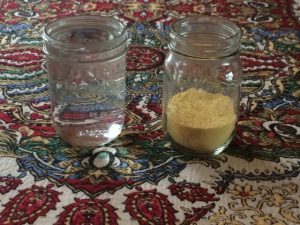 She boiled the Arrowroot in some milk, using 2%. She later said that she should have used whole milk or almond milk. 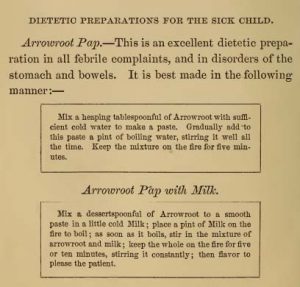 Baked Tapioca with Apples by Greg

“I boiled the tapioca until clear, put apples on top, and baked it for 45 minutes, just like the recipe said.” Greg also brought along a couple cartons of Organic Heavy Cream to be mixed in with the tapioca and apples, in case some thought it was too bland. 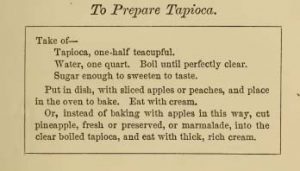 We held the Convalescent’s Banquet on Monday and placed everything neatly on a table. We included the names and ingredient lists of the foods provided in case those in attendance were allergic, especially since half of the food was very heavy on the gluten. Some came to watch others reactions, others came to just look at the food, while some were brave enough to try the food. Here are some of the most popular quotes from the event: 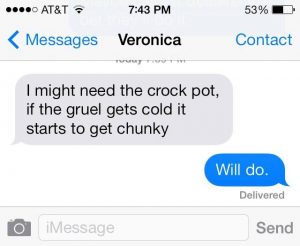 A text you may not see too often today

Attendee to Greg: “Did you make the tapioca?”

Attendees about the Arrowroot Pap: “Looks like snot to me.” “An unfortunate texture, but the flavor-it had a little.”

When asked if they wanted to try some food: “I have some leech therapy to go to.”

Common quote: “I’m just glad I wasn’t sick back then.” 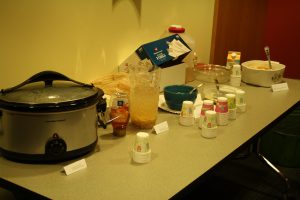 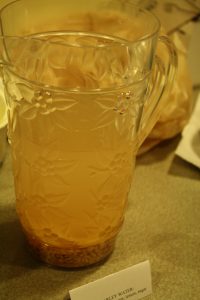 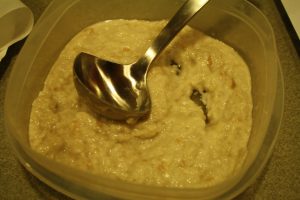 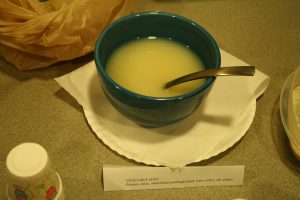 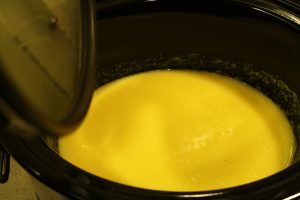 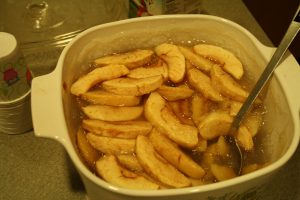 The creamless tapioca and apples

All in all, it was a successful event. I think many were unsurprised at how bland everything tasted and others seemed in awe that we decided to do this. Yes, some may have felt a little queasy afterward, or while looking at some of the food (the Bread Jelly did it for me), but we all were a little healthier the following day. Laughing is good for you, right? And many of us walked away with a greater appreciation for it being 2014 and receipts for food like Bread Jelly and Arrowroot Pap are no longer in our vernacular. And as someone said, “Now I know why no one ever complained about the gruel in Oliver Twist.”