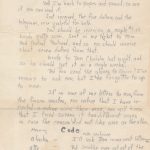 History is not just about the big names, it is also about the small names. In 2005 Archives and Special Collections bought a letter at internet auction to add to our collections. It documents the experience of a male in the military during World War II. It, however, does not document the man’s last name. All we know about him is that his name is Bill.

We can learn a significant amount about Bill from this letter. For one thing, he was in Alaska when he wrote his letter to his “folks” on October 12, 1944. His parents sent him money and he sent money back to his parents via two $7.50 bonds and the money he got in exchange for a New York Central Railroad ticket. He wrote a letter to Don Chisholm and sent gloves to Edgar. Bill had a sense of humor and tried to develop a code to get around the censors of the mail. After he writes the letter he may be unable to write to them for a “week, two weeks, maybe over a month.” But, he still asks his parents to give his APO to “Mimi, Eleanor, and anyone else who wants it.” This letter appears to be his “last words written on American soil [which] are written with trembling. For [he has] the first symptoms of that dread disease –snow Flake Fever, just another complication of Gangplank Fever.” Bill took comfort in his parents’ “reassuring words on the luck of [his] going arctic” and hopes that his letter will ease any worry they have for him. He signs off with “Love, Bill,” but adds a P.S. “This will be one place where you can get cold feet and they won’t say you are yellow. Bill.”

From this one letter we can see a piece of history. America was at war, a world war, and people found themselves far away from home. A whole country separated him from the rest of his family. From the tone and clues in his letter, one can see the immense importance correspondence played in the lives of military personnel, their family, and friends. He appreciates the telegram and their assurances. Bill deliberately warns them that he will not be able to write them for a while. He even creates a laughable code to disclose his whereabouts, reflecting his keen awareness that censors monitored correspondence. In fact, I wonder if Bill’s letter was no different from the millions of letters censors weeded through. Archives have countless letters, journal entries, and photographs from other military personnel serving in Alaska. Many of them reflect the same trepidation Bill felt about being in an unfamiliar and remote environment.

It is amazing that we can get all this history, all this context, from one letter and we do not even have Bill’s last name. Take his letter and other archival documenting World War II in Alaska and we can get an interesting picture of what it was like living back then. Suddenly history becomes less about historical events, but a world with people just like us. And in this case, we happen to know the person on a first-name-basis.