Home Photographs The Hatcher Pass Ski Resort That Never Was

The Hatcher Pass Ski Resort That Never Was

Just before the new year, I was working with some additions to our collection of records from the Alaska Pacific Consolidated Mining Company, the company that ran Independence Mine at Hatcher Pass.  Tucked into an oversize folder at the end of the collection, I found this gem:

This photo is a proposal for the development of “Hatcher Pass Ski Area,” an alpine ski resort that would have been built at Hatcher Pass just south of Independence Mine.  (Click the image for a larger version of the photo.)  The document is not dated but likely was made sometime in the 1970s, since you can see Hatcher Pass Lodge — the A-frame building built by Hap Wurlitzer in the late 1960s that he still runs today — where the photo is labeled “Hotel Main Lodge” on the right side of the image.   The proposal calls for a 6,300-foot Riblet ski lift to be built from the road up the southern slope of the Hatcher Creek drainage to the top of Hatcher Pass itself (see the black line running diagonally up the mountain slope in the center of the photo).  According to the proposal, the lift would have brought skiers to the top terminal at a rate of 990 skiers per hour and would have eventually connected with a chair lift or gondola from the Willow side of the pass.  A base parking lot would have been built at the site of a former airstrip (where a parking lot does exist today), and a day lodge at the base area would have contained restaurant facilities, as well as apartments and dormitories for ski resort employees.

If you’ve been up to Hatcher Pass today, you know that this proposal never came to fruition, nor has any alpine ski area been built in that location.  It is unclear who wrote this proposition or why it was never built.  Perhaps the cost of maintaining and repairing the road to the lodge, a concern voiced by the proposal, were too much for the state.  Perhaps the avalanche danger of the drainage was too high.  Or, perhaps, the real costs of the project were just too steep; the estimate, printed on the top of the photo, is a mere $650,000, a number that seems absurdly low for the project’s scope. 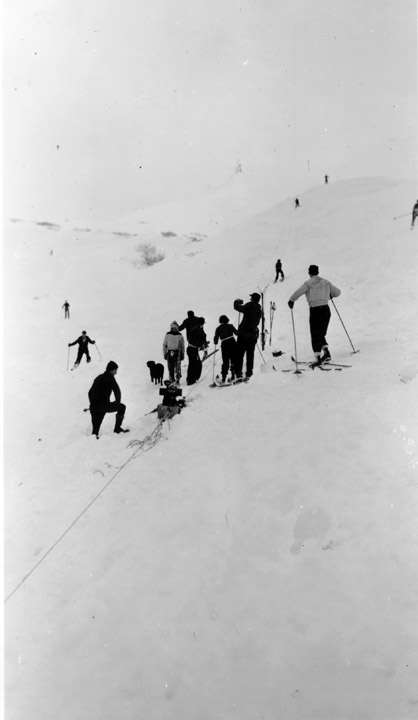 Whatever the reason, this photo reminded me that Hatcher Pass does have a rich skiing history that often gets overshadowed by the region’s mining history.  According to the wonderful website, “Alaska Lost Ski Areas Project,” the earliest ski area at Hatcher Pass was a rope-tow built by Jim Turner that operated in the 1930s and 1940s on the slope behind Fishhook Inn at Mile 12 on the Hatcher Pass Road at Fishhook Creek.  (See photo at left.)  Shortly thereafter, Victor and Jim Cottini built another rope-tow at their Little Susitna Roadhouse (now the Mother Lode Lodge), which was likely operated until the 1960s.  But the most popular place for alpine skiing at Hatcher Pass was at Independence Mine.  Mine employees skied the surrounding mountains both for recreation and travel, as it provided a convenient way to reach Palmer when the road was impassable.  When mine operations ceased during World War II, the area became an increasingly popular destination for skiers from Anchorage, who could take a 3-hour bus ride from the city to the pass and stay overnight in the  mine buildings.  Skiing largely took place there on the slope from the main mine complex up to Gold Cord Mine, where a 500 vertical-foot rope-tow and T-bar lift were built in the 1960s and a private contractor ran the mine bunkhouse for lodging and meals.  The U.S. Army Biathlon team was also based at Independence Mine during the 1960s, and in the 1970s, the Manager’s House at Independence Mine was converted into a bar and lodge for skiers and snow machiners.

There is no formal alpine ski resort at Hatcher Pass today, though it is still a popular back-country ski area.  However, in the intervening decades since the ski hills at Hatcher closed, there have been many people who have returned to the idea that someday the area might be more developed for alpine skiing.  In 1985, the Alaska Department of Natural Resources commissioned a study  to assess potential sites for an alpine ski area in Hatcher Pass.  The study came up with six locations: Hatcher Pass West (off the Willow Creek Road just west of the pass), Grubstake Gulch, Sidney Creek, Lone Tree Gulch, Tree Gulch, and Government Peak. Notably, the  Hatcher Creek drainage area targeted by the above proposal in our collection was not among the sites studied.  Of those that were, Government Peak, which rises west of the Hatcher Pass Road where the Matanuska-Susitna Valley begins to ascend into the mountains, was determined to be the best site.  Accordingly, proposals for a ski resort in that area began in 1988, when Mitsui Corporation’s proposed a$221 million resort with a golf course, dude ranch, airport, and ski area at Government Peak.  The venture was eventually dropped in 1990, after Anchorage lost several bids to host the Winter Olympics and economic assessments indicated that the resort would not be financially viable.  Similar proposals have  followed in 1992, 2002, and, most recently, 2007, but no ski resort has been built to date at Government Peak or anywhere else at Hatcher Pass.