Home Alaska's Digital Archives Even if you ask

Even if you ask

Every so often we’ll find something in a collection that really resonates with us and the work we do.  For me (Arlene), this week, that was a letter. The letter was pasted into an album of photographs kept by A. G. Maddren. A. G. Maddren was a geologist with the U.S. Geological Survey (USGS) and in 1911-12 he was on an expedition working on the US/Canada boundary survey. 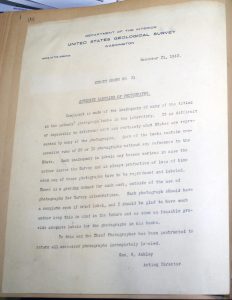 Don’t try and read that fine print, I’ll summarize it for you.

Apparently the Chief Photographer back in the office in DC had had enough, and the Acting Director of the USGS, George H. Ashley had probably gotten an earful, and a memo was sent out in the form of an Order.

In short, the letter complained of the “inadequacy of many of the titles in the authors’ photograph books in the laboratory. ”

Though the statement that incomplete labeling “is always productive of a loss of time” struck home, the part that really caught my eye was the preceding statement of “Such inadequacy in labels may become serious in case the author leaves the Survey.”

See, that’s the thing about records and especially photographs. If they aren’t labeled at the time, what are the chances that somebody else will recognize them later and be able to provide descriptions? And if they go unlabeled, how will any potential user ever know how to find them?

Sometimes we luck out and are able to recognize a location in an image: Mt. McKinley, Mt. Marathon are often givens, certain areas of Anchorage, Fairbanks, Seward are pretty easy, Nome’s waterfront, that sort of thing, but not always, and especially not in the area of Alaska Maddren was traversing which is totally unknown to me!  And we certainly don’t have the option that the acting head of USGS had, which was to close his order with the statement that any inadequately identified image would be returned to the photographer for labeling.

So my standard plea to everybody, whether or not you ever intend your personal or work photos to end up in an archives: label soon and well?

By the way, Mr. Maddren clearly didn’t learn his lesson from the letter he so carefully attached in the album. Here’s the photo on the facing page: 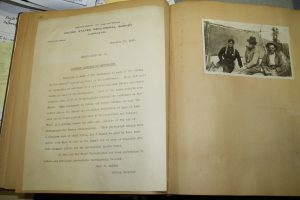 Letter and image from the Maddren album.

If you click on the image, you can see the handwriting to the left of it where somebody carefully noted the identity of each individual in the photo by a single initial. So much for Orders.

P.S. A student digitized all the photos in the album for us a while back and I hope to have them up on the Alaska’s Digital Archives site within a month or so. So keep an eye out, and maybe if you’re familiar with the northern boundary area between Alaska and Canada, you can identify some of those unidentified locales for us.