Home Photographs if a photo is worth 1000 words, how much does the caption count for?

if a photo is worth 1000 words, how much does the caption count for?

When teaching archival research methods, one of the things we frequently talk about is assessing the value, the authenticity of a document. Nothing high end, necessarily, no need to pull out the electron microscopes, but using internal or external evidence to assess the value of the information in the document.

Let me give you an example. Yesterday a researcher was looking at a photo dating from 1911 to 1912 taken by a photographer for the USGS. It was a standard landscape shot, some hills in the distance, nothing that really stood out. Except some writing on the image that identified a Native cultural site. And the researcher asked me if the writing was the photographer’s or if I knew when the caption had been added: i.e. in 1911-1912 was this a known site? Impossible to tell, from internal evidence. Perhaps if his field notes still existed, somebody might track those down.

So that had me thinking about the whole authenticity thing. And why, when looking at documents and evaluating them for trustworthiness or what-have-you, knowing the whys and whens of a document can be helpful. Or how, often, the lack of those things can provide information too.

That point was hammered home this afternoon. A few years ago, Kit Crittenden, author of Get Mears! Frederick Mears: Builder of the Alaska Railroad, gave us some of the Mears family papers she had collected during the writing of her book, with the permission of the family. We had a recent request for a high resolution scan of a photo of Frederick Mears’ father (Frederick Mears senior) and I was looking for the image in the collection when I ran across the following image. 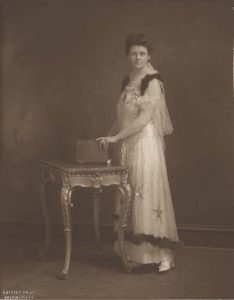 Women’s fashion always catches my eye and since it’s March, Women’s History Month, and since I’m always on the lookout for cool images around which I can build a blog entry, this one really jumped out at me.

And then I read the caption, handwritten on the back of the photo in what are two different inks and I’m pretty sure are two different hands: ‘June Wainwright Mears (wife of Col. Frederick Mears.) Sister of 4-star General Jonathan Mayhew Wainwright IV U.S. Army – the “Hero of Bataan and Corregidor” (Congressional Medal of Honor conferred by President Harry Truman.)’

Now, that’s all very interesting. But what could it possibly have to do with this portrait? While I’m not a historical fashion expert, I’m fairly sure that’s not a post-WWII dress. Which means that the second portion of that caption, the bit about June’s brother, was added some time after the fact. June was married to Frederick Mears in 1907 so that piece of information was probably contemporary to the image, not that we know when that was added, either, or by whom.

But why is any of that relevant to the image, anyhow? Here we have this woman wearing a spectacular outfit, posing for a commercial portrait, but does her brother really matter? Or for that matter, her husband?

Then again, maybe it does. That dress, the shoes, the hairdo, the commercial photography studio, all of those factors point to a well-off, if not wealthy family. (Check out the fur trim on the overskirt). Portraits like this don’t just document the individual, they document social status–probably conferred on women by husband or family. Which is relevant to the study of the history of the status of women in general. And which is then reinforced by the captions added afterward. Those captions may only add up to 34 words (depending on how you count them) but which say many more words than the authors may have intended.

That’s a lot of theorizing for a simple portrait which caught my eye because of the sparkly dress, isn’t it?