A lot of people have been asking me lately about collections and what happens to the embarrassing or maybe not-quite-ready-for-the-public-eye bits in them. And the verb that’s been used by a lot of them is sanitizing. The questions usually fall into the following two groups:  Do we do it? Will we do it? The same people generally don’t ask what we think about sanitizing collections, but since I can’t leave well enough alone and think that the answer to that question is the only way to understand the answer to the first two questions, I generally start out with the answer to that one.

And here it is: this really shouldn’t be under the purview of the archivist. For starters, few archivists are going to handle every page or item in a collection, read every line. What if we missed something? Not to mention the knowledge gap: we weren’t the ones creating the records and we’re very happy to admit we aren’t omniscient and can’t always predict what use might be made of a collection, so how can we possibly be trusted to recognize what should be sanitized (if indeed, one even agrees that this should happen?) Generally, the answer to Will we do it is no, donors need to weed the materials of problematic contents before they come to the archives, if the collection contains materials they do not want left to posterity. Have we done it? Yes, under very strict and definite guidelines provided by either law or the donor, but in truth, it’s made me nervous–a lot–to be the responsible party (especially that whole possibly missing something important part) and generally, so you know, we won’t agree to do it in future.

Now I could get into a lengthy discussion as to why collections shouldn’t be sanitized, but enough other people have done that, and done it well, that I’ll move on. And legal, moral, censorship, ethical, or embarrassing issues aside, there’s another piece to the whole discussion. There’s the loss of, for lack of a better term, harmony: the feeling that all the parts add up to some sort of a whole. Take this photograph (which is one of my favorites in our holdings, though I know I shouldn’t admit to having favorites.) 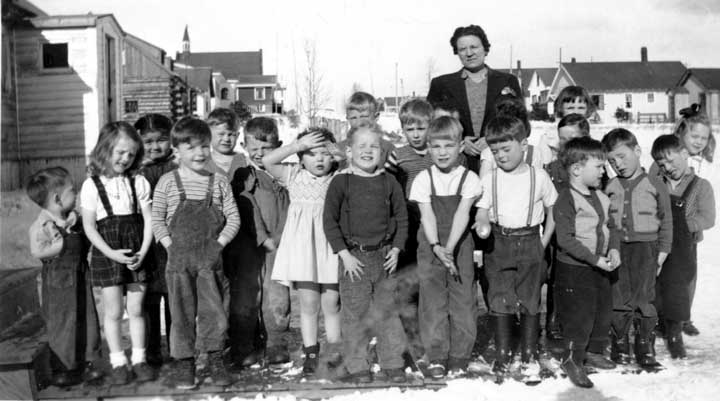 This photograph comes from a largely unprovenanced collection we have and shows a kindergarten class in Seward from 1946. (Click on the photo to be taken to the Alaska’s Digital Archives version of it to learn all we know about it.) Now I look at this photo and it just makes me happy. There’s maybe 3 individuals in this whole photograph who aren’t doing something embarrassing or dorky or who aren’t mostly obscured by somebody else. So that’s maybe three people who have reason not to be embarrassed by this photo. The truth is, I don’t think any of the participants in this group portrait have anything to be embarrassed about. Some of the scrunchy faces (including the teacher’s) are due to the fact that they’re clearly facing into the sun on what is a very bright day on a snow-covered Seward street. The others? well, aren’t they just kids being kids? Doing what kids do? Which means getting distracted, getting impatient with people who tell them to stand still and stand up straight and don’t put your hands in your pockets (I still do that, just ask my mother), and probably shivering since I see that none of them are really dressed for the weather. Those poor girls in their short skirts and can you really blame the tiny boy on the left hand side for tucking his hands inside the bib of his overalls?

What it comes down to, for me, is that I’d rather live in a world where a photo like this exists, that shows this moment in time and captures real people doing real things in real time, than to live in a world where things like this have been sanitized out for worry about whether this could be used as legal evidence that the teacher is liable for any frostbite incidents or burned retinas, or simply because most of the subjects aren’t presenting the most composed or attractive versions of themselves for the camera. It’s real, it’s messy, it’s life. And I hope whoever these children are, and wherever they are now,  that they can find the same joy in this wonderful image that I do. It’s a real moment in time, captured about as honestly as anything could be.

Have a good weekend, all.