It’s pretty uncommon for one of our collection pickups to take us outside of southcentral Alaska and involve sea-going vessels and airplanes, but in July, we did just that!

The Museum of the Aleutians in Unalaska had a large collection of materials from Bill Laughlin which they wanted to transfer to us. We have a large collection of his materials too, so we were looking forward to reuniting the collection. His academic career in anthropology included professorships at the University of Oregon from 1949-1955, the University of Wisconsin from 1955-1969, and the University of Connecticut from 1969-1999. His primary field of specialization was physical anthropology, including Aleutian-Siberian studies, human biology, population history, and human evolution. Laughlin first came to Alaska in 1938 as a member of the Smithsonian Expedition to the Aleutian Islands, directed by Dr. Ales Hrdlicka. In 1948, he was the field director for the Peabody Museum’s Expedition to the Aleutians. Over the years, he made over twenty trips to the Aleutians. While his papers often reflect biases and perspectives in his field of study, and should be reviewed with that in mind, the collection still has much information of use to those looking at the history and cultures represented in the areas he visited.

We researched the cost of air freight and guess what? It was actually cheaper to go fetch it ourselves. So Arlene rented one of the UAA cargo vans and booked a ferry ride, Gwen booked a flight, and we got ready to go. (FYI: Funding for this trip came from financial gifts given to the Archives in support of our work, not from University funding).

It seemed ridiculous to dead-head to Unalaska with an empty cargo van. Many years ago, when the National Archives branch left Anchorage, they transferred a lot of their unused or slightly used archival boxes to us. We’ve been sharing them with archives and museums in Alaska ever since. Since archival boxes are crazy expensive and the shipping on them is even more crazy expensive (and even more crazy expensive to ship to Dutch Harbor), we checked with our colleagues at MOTA to see if they could use any. Turns out they could. So we packed up the van with empty boxes and Arlene headed for Homer on a very very rainy Tuesday. 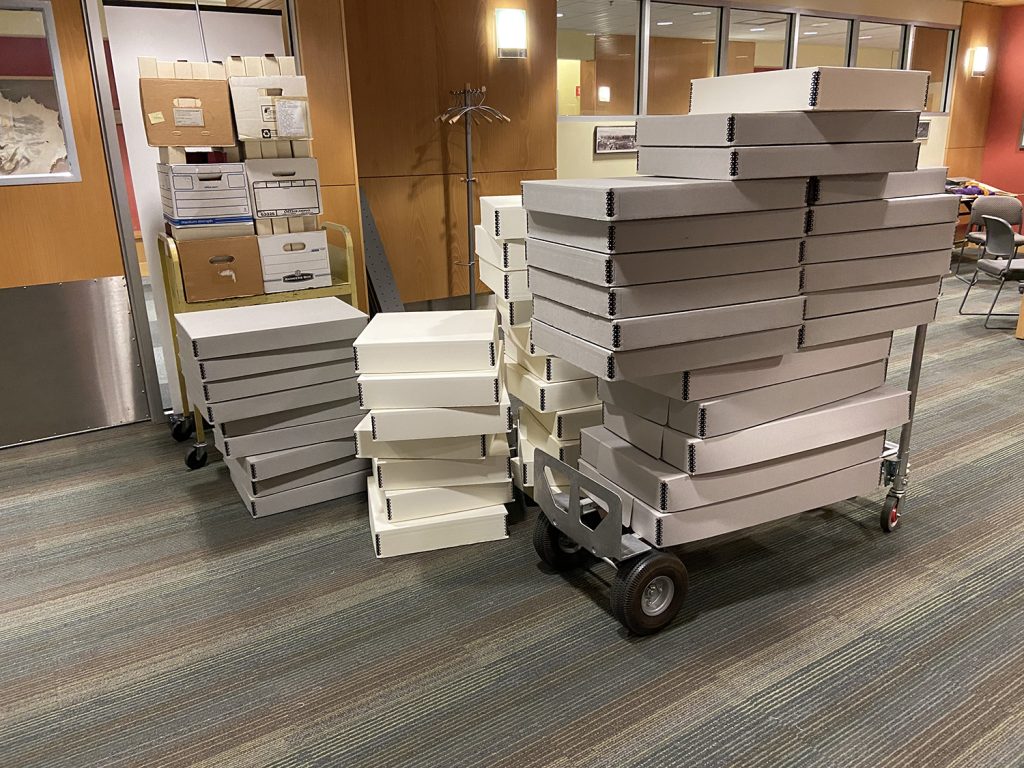 Empty boxes in the Archives research room, ready to be loaded onto the van. The boxes of boxes on the yellow cart are archival photo albums in cases. 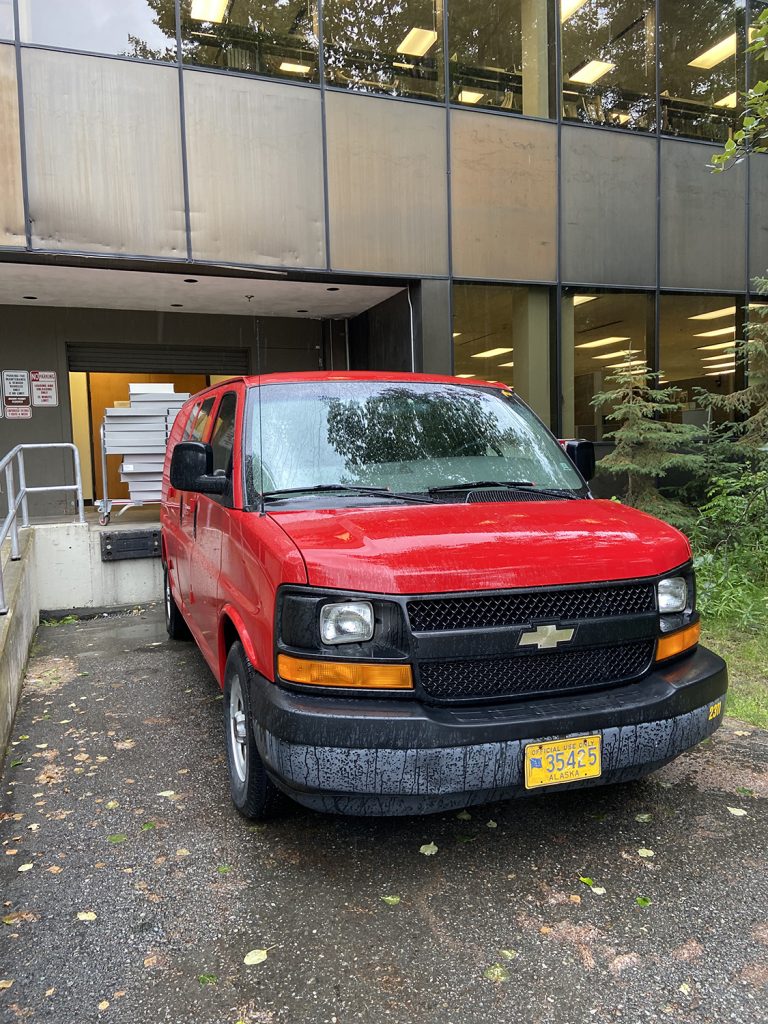 The very clean but very wet van in the Library’s loading dock, about to be loaded with empty boxes.

After stops in Kodiak, Chignik, Sand Point, King Cove, Cold Bay, False Pass, and Akutan, the Tustamena arrived right on time Saturday morning in Dutch Harbor. A couple of nights weren’t the smoothest sailing, but thankfully the Tustamena had just had her stabilizers redone and Arlene apparently doesn’t get seasick (or not so far, anyhow!) Meanwhile, Gwen had departed Anchorage on a late Friday afternoon flight and arrived safely in Dutch Harbor mid-evening.

Arlene headed straight to MOTA with the van, Gwen met her there, and with the help of some of the MOTA employees, we got the empty boxes offloaded and loaded up the rather heavier Laughlin collection boxes. 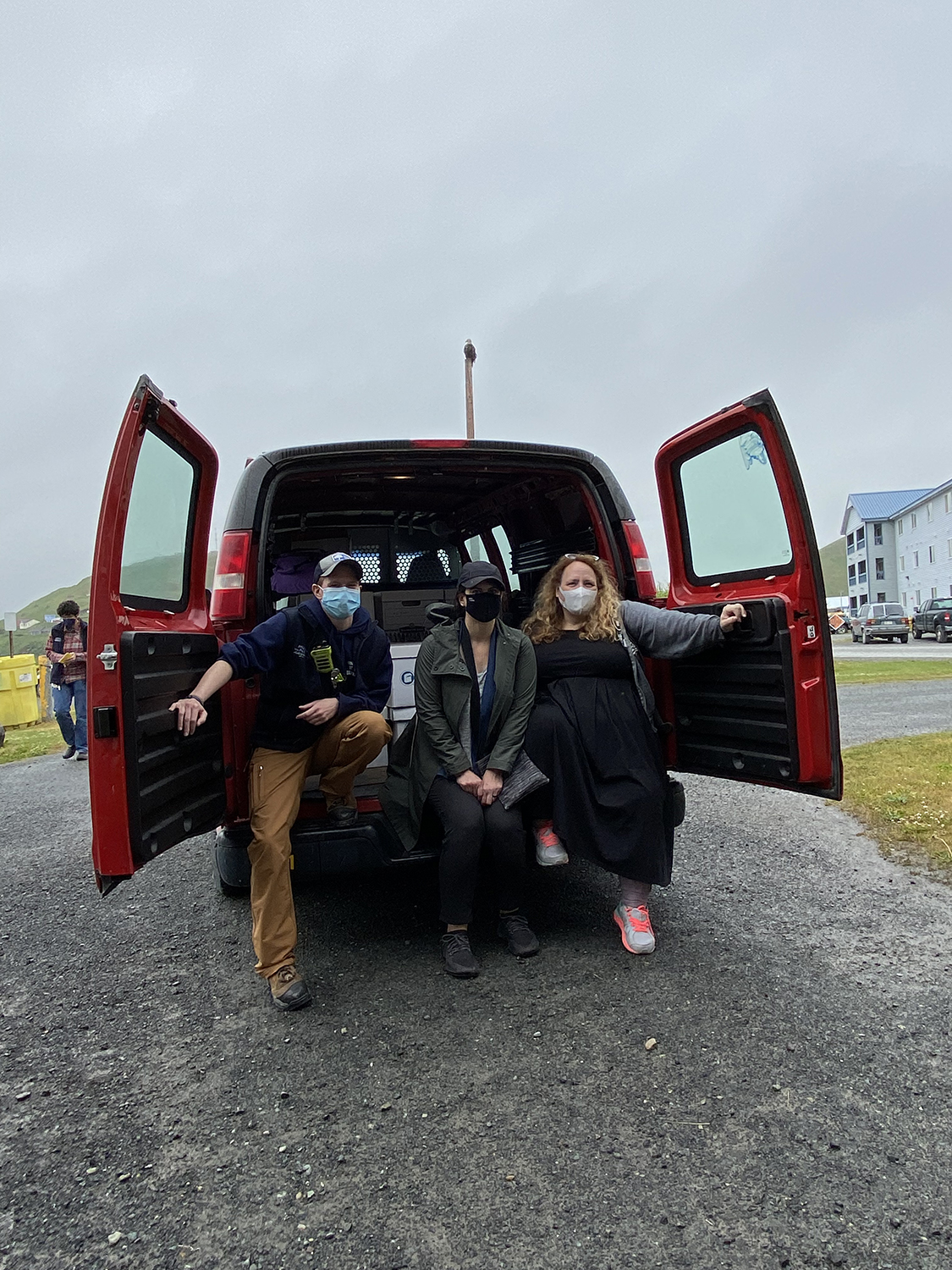 Three hard-working power lifters with the van loaded with heavy boxes of papers. Karen Macke of MOTA, Gwen, and Arlene.

By then it was after noon, Arlene was starving (because she’d failed to eat breakfast and then done a power lifting exercise), so we went out to lunch. Since Arlene didn’t have to be back to the ferry dock until 3 pm and Gwen didn’t need to be back to the airport until about 5 pm, and we had a van at our disposal, we drove around for a bit. And oh, wow.

One of the interesting things about the work we do is that we often recognize places in Alaska just based on the photos in our collections. But there is something unbelievably special about being able to see them in person, those iconic images. Not in black and white, but in full living color. Like the historic Russian Orthodox church in Unalaska. For us it’s one of the most photographed locales in the photos we have that relate to Unalaska and Dutch Harbor. But to see it in real life!

A 1912 photo of Unalaska from the McGlashan and Monsen family photographs. 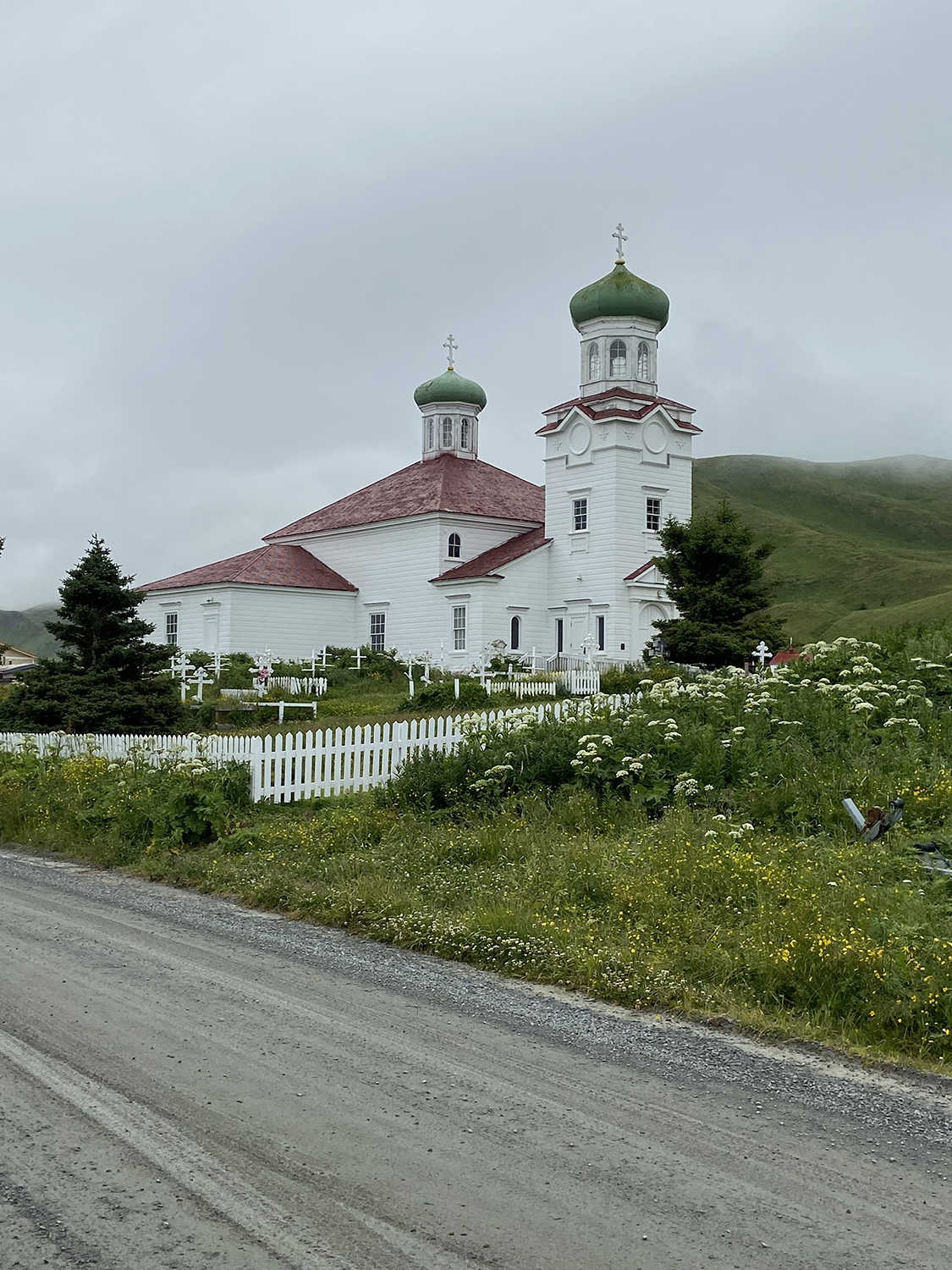 Gwen didn’t get to see all the places en route that Arlene did, but she made up for it (sort of) by getting to explore Unalaska more fully. That wasn’t entirely intentional. Her flight home Saturday night was canceled and so she wasn’t able to fly back until Monday night. But she got to do some hiking in the meantime and a few wonderful locals and visitors provided tours around as well. And since the salmonberries were ripe, she got to indulge with those, too. 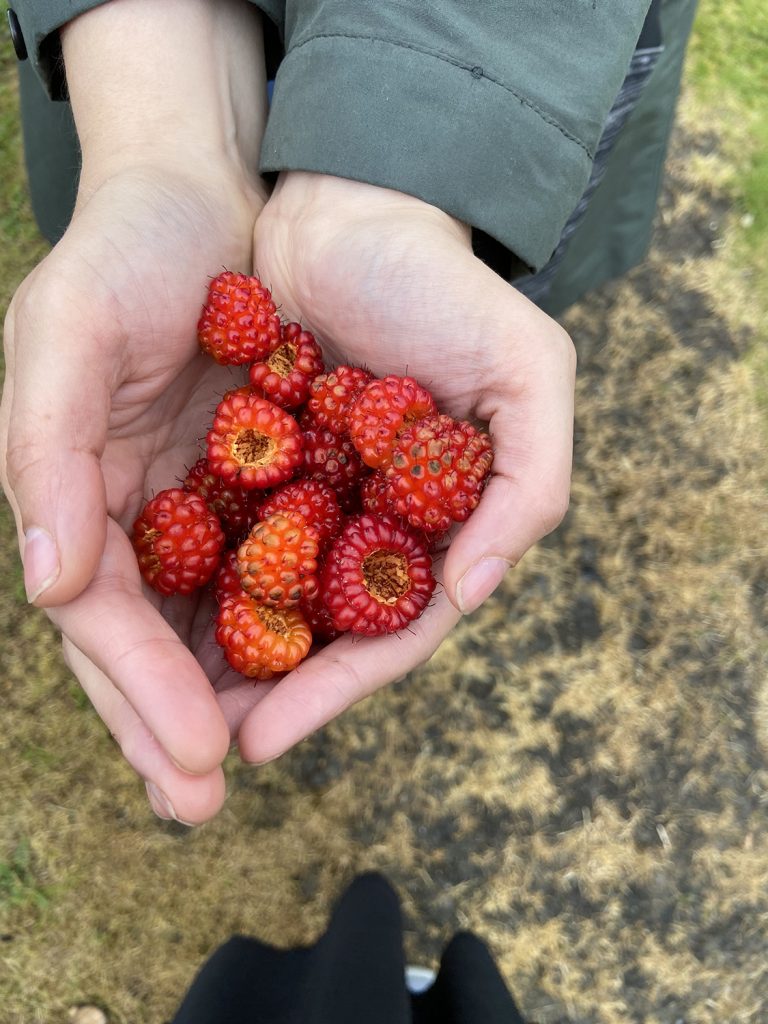 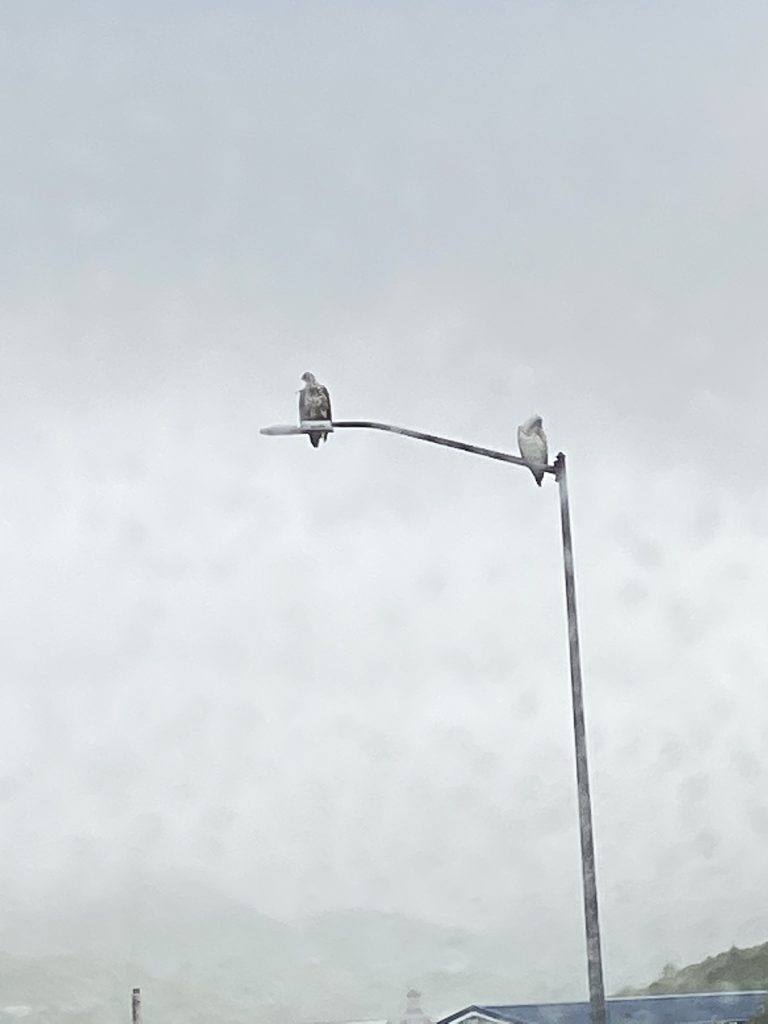 As Gwen kept saying “Dutch Harbor has eagles like most places have pigeons!” One on nearly every light pole, and sometimes two.

And can you really say you’ve visited the Aleutians if you haven’t dealt with a weather delay? Arlene’s claiming that some of the rougher waters count as an equivalent, but really, with a few port loading/unloading exceptions, the Tustamena ran completely on time and arrived back in Homer just when she was scheduled to on Tuesday afternoon!

Back to the Library to offload that evening, and return the now muddied much-traveled cargo van to UAA’s Transportation Department. The next morning, while Arlene was conveniently not around to help, Gwen roped in some of our Access Services colleagues to help move the boxes we already had in the vault and the incoming boxes to a new location in the vault where they could all be housed together. 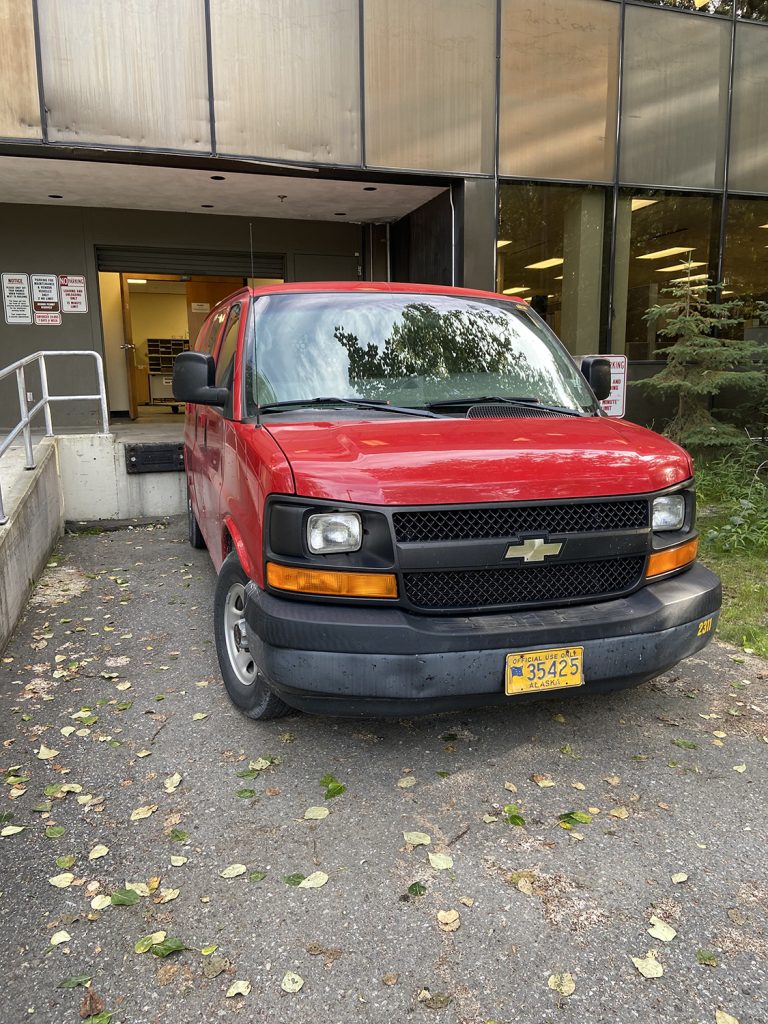 The now slightly muddy van, ready for offloading at the Library loading dock. 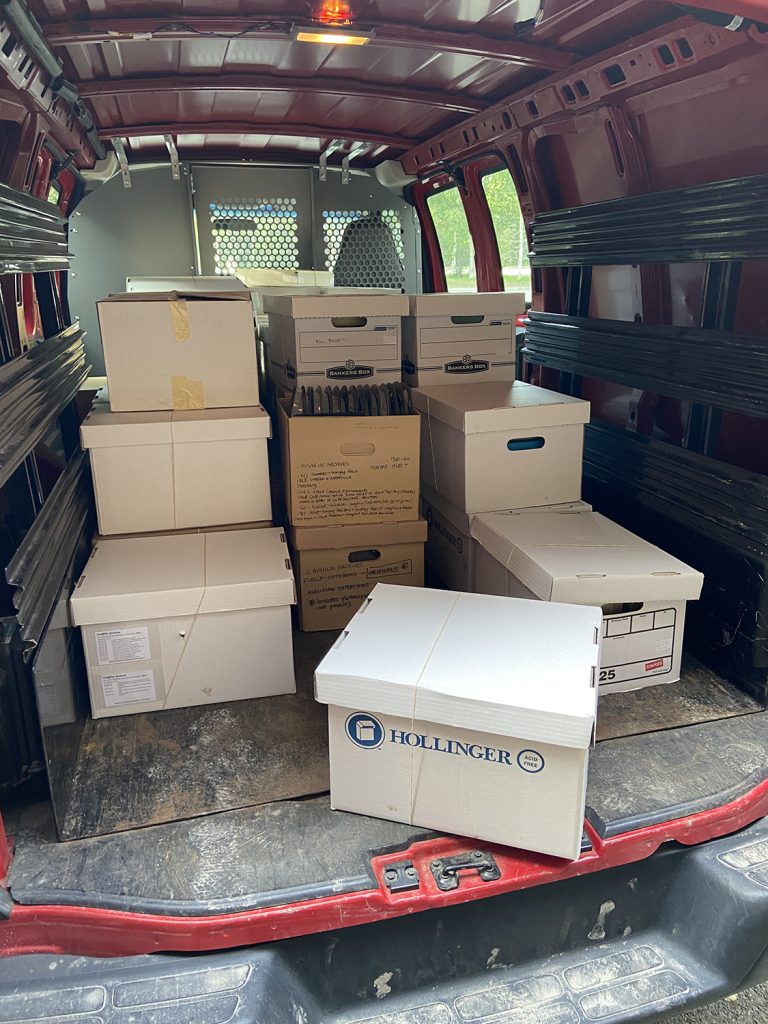 Arlene remembered to take a photo of the materials in the van after she’d already off-loaded one rather large hand-truck’s worth. 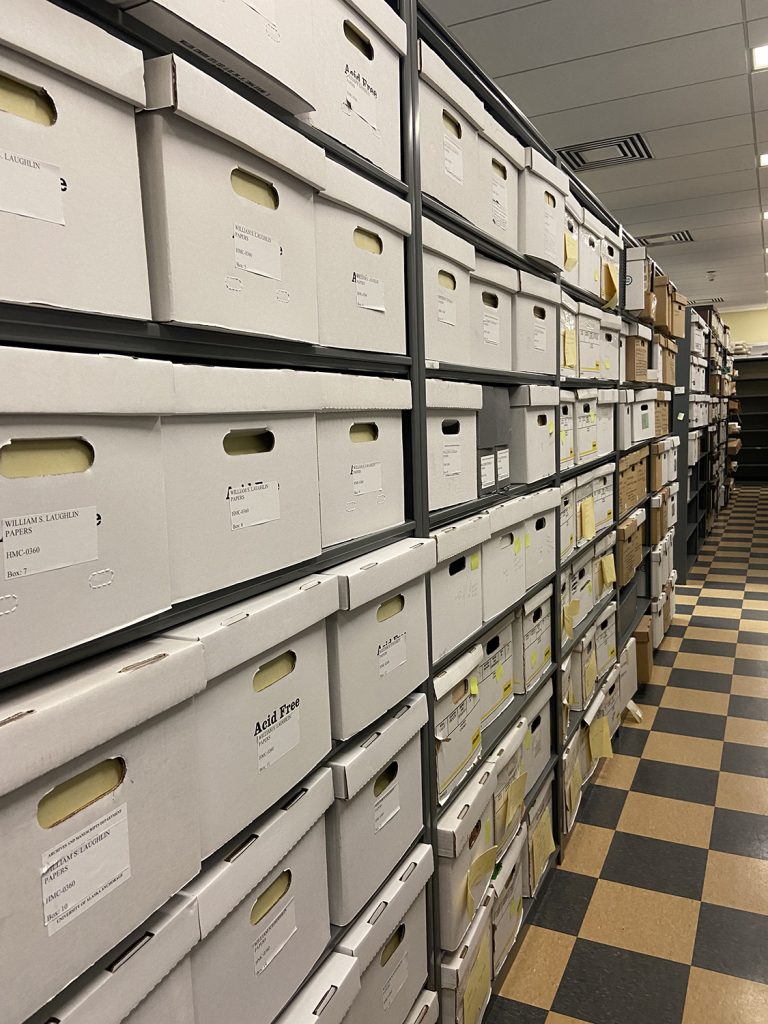 The Laughlin collection all in place in the archives vault. Now to get it described! Which will definitely be a much longer project than the trip to fetch it was.

And last, a few other photos from the adventure. Arlene and Gwen both say they want to do it again and take even more pictures than they both took this time. Arlene is content with sticking with the ferry, except she also wants to spend more time in a few of the ports so that may require some strategizing. Gwen’s experience has made her decide that what she wants to do is to fly to Dutch Harbor, stay there for a while, and take the ferry back, so if the flight has a delay, she’ll be at home and not have to pack for an unexpected extended stay. What an amazing learning experience, and so much more to see and learn! 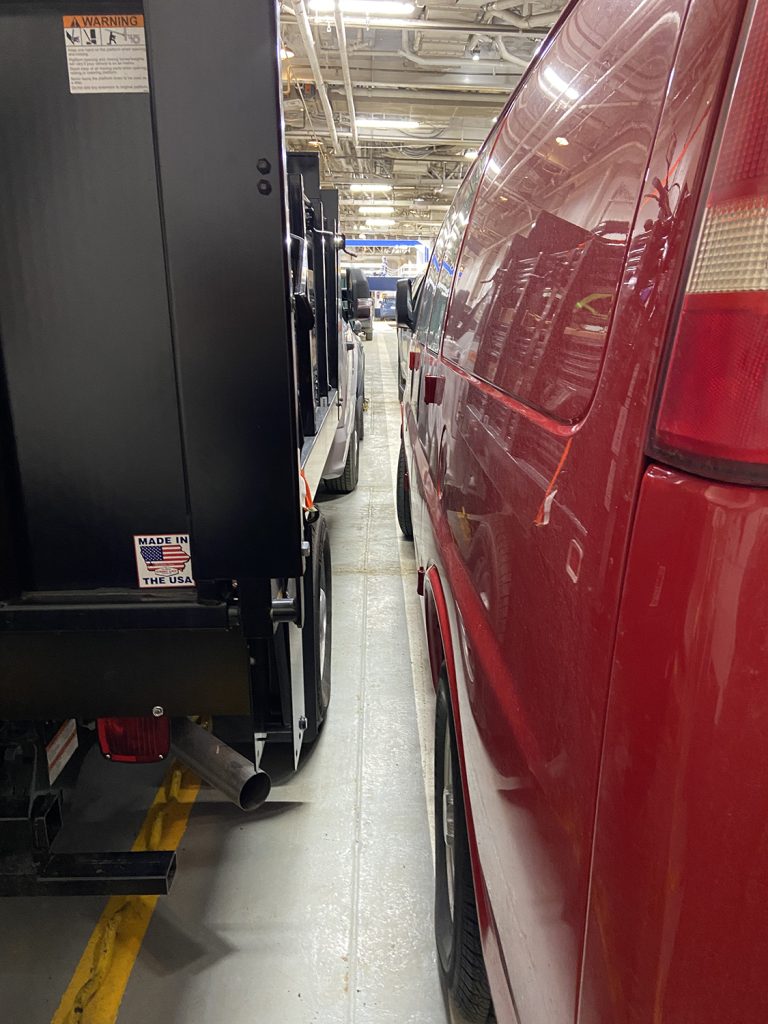 If you have a large vehicle going on the ferry, you might want to request not being put in the middle row. Arlene was unable to access her stuff in the van for a part of the trip because there wasn’t enough room to open the cab doors on the way down! Turns out middle seats for cars on ferries basically have all the annoyances of middle seats on airplanes. 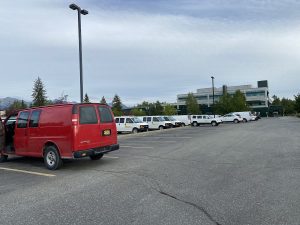 One of these things is not like the others. We’re still not sure why Arlene got the only non-white cargo van in UAA’s fleet, but it was a very nice cargo van and comfortable to drive, so that was good for the Anchorage-Homer legs of the trip. And the color was much admired by all who saw it. And it was pretty good on fuel consumption, too! 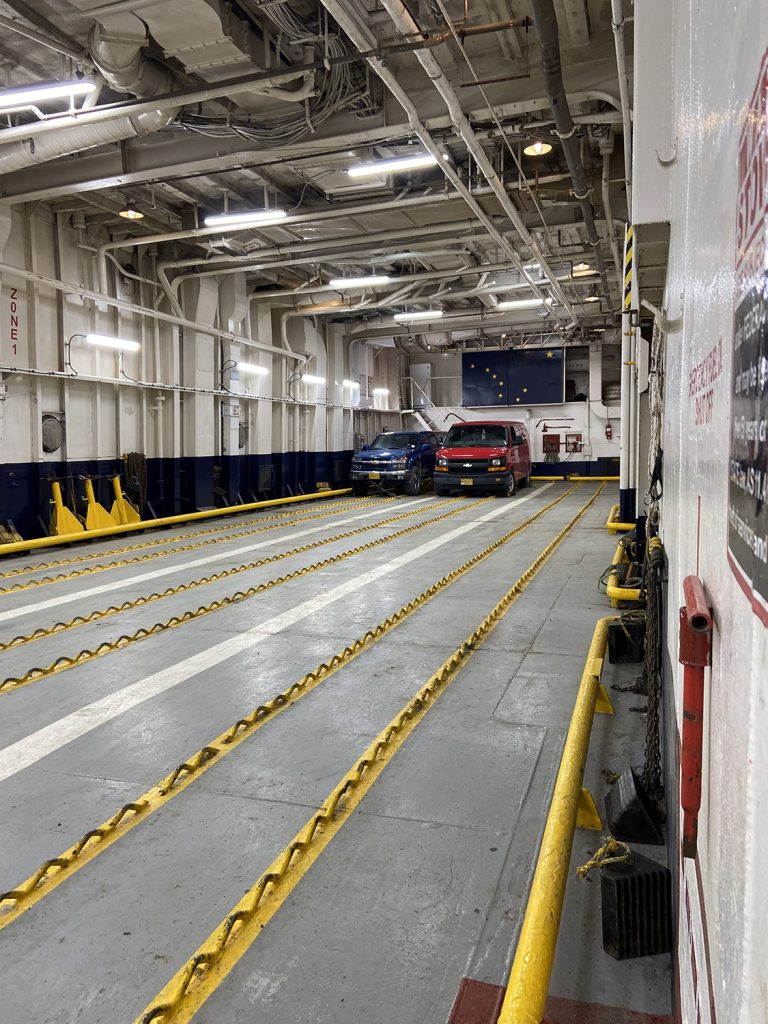 The middle seat, again, on the ferry on the way back, but this time the Tustamena crew promised Arlene they’d give her room to access her stuff in the cab. And they did. 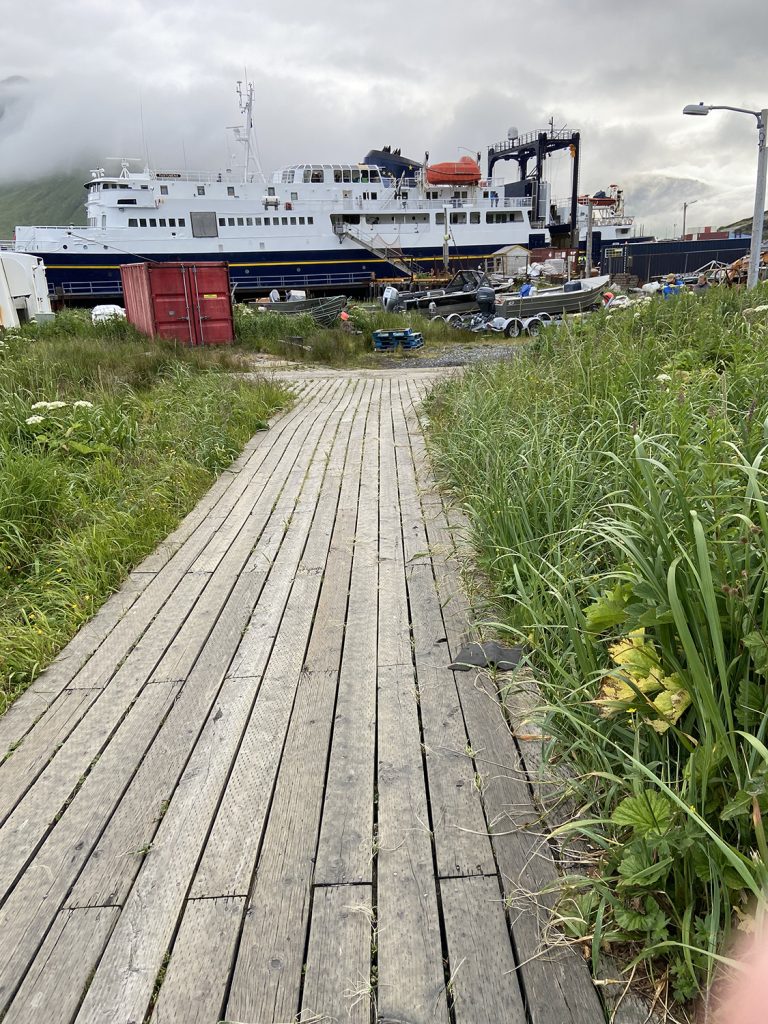 The Tustamena from the boardwalk in Akutan. 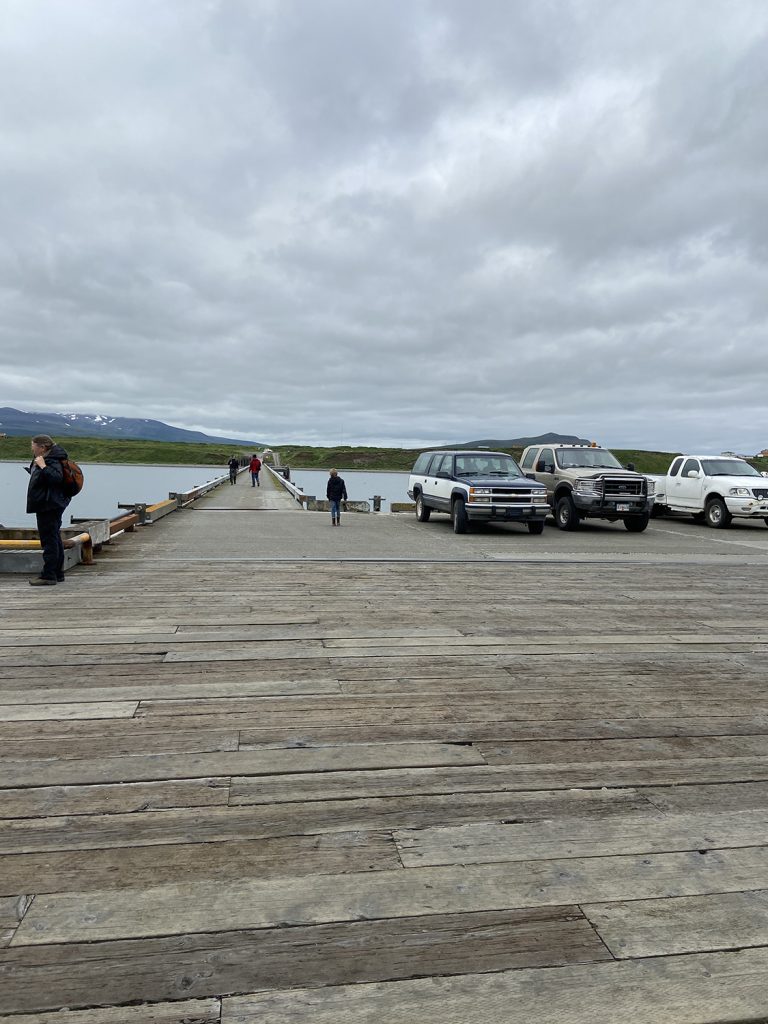 Cold Bay dock. Arlene got to take a quick tour of the town and the Izembek National Wildlife Refuge courtesy of the NWR staff.