Home Acquisitions Visiting Alaska in 1940: films from a salesman

Visiting Alaska in 1940: films from a salesman

Along with collecting archival materials ourselves, we also serve as the archives for the Alaska Historical Society. When they receive gifts of archival materials, they bring those gifts to us and we care for and provide access to them.

Recently a group of materials brought to us included 4 8mm films. The note with the films indicated that they’d been taking by a sales rep by the name of Stanley Zuern who traveled to Alaska in 1940 or thereabouts. The cans were in good shape but when I opened one of them, I got an overwhelming vinegar smell. 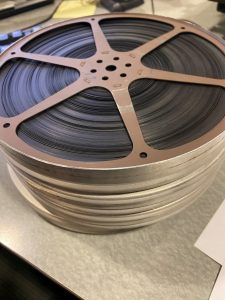 Vinegar smell on old films is a sign of degradation. It’s called vinegar syndrome. The films looked like they were in good shape and certainly we can keep them in a very cold environment to help slow further degradation, but that doesn’t really help with making their contents accessible and it isn’t a permanent preservation solution. So we needed to get them digitized for access and we needed to get good captures for preservation. That can be expensive. Thankfully the Alaska Historical Society board agreed to fund the digitization of these films (Thank you AHS!).

I sent them off to our vendor, waited a few weeks, and then received a portable hard drive back with the digital copies. By this point, I really wanted to see what was on those films! But first, I had to follow our processes for making sure the digital files were fine, transfer them to our preservation server system, and then run checks to make sure the transfers happened without any corruption of the files. Preservation quality moving images files are pretty huge, even if it’s only about an hour of footage, so all of that work took about 2-3 days. Then I got to watch the films.

And oh, are they fascinating. The four reels were most likely compiled from several small reels of film. The first two reels appear basically chronological since they cover his trip aboard a Alaska Steamship Company ship (or two) from Seattle to Ketchikan, Petersburg, Sitka, Juneau, Cordova, Seward. The last two reels are a little more confusing, time-wise, anyhow. There’s Anchorage with snow, and Anchorage without snow. A railroad trip on the Alaska Railroad, that appears to be going from Fairbanks to Anchorage. And a bus journey that appears to be going from Fairbanks to Valdez via the Richardson Highway. And some places I just couldn’t identify, like the cliff with graffiti on it somewhere near a port in reel 3. (Maybe you can?) But the very last minutes of the fourth reel have a return to the Seattle harbor.

And that’s just the geography. I found the content fascinating too if occasionally confusing. In the second reel, there’s some footage of a boat in the Juneau marina named the Ark of Juneau. I didn’t know what that was, until I did a little bit of web searching, and am now fascinated with this story. (I’ll let you discover it for yourself). That particular piece of footage allowed me to verify that the date on that section of the film was late summer or early fall of 1940. I don’t know why he felt the need to take footage of the hospital in Petersburg, but I wonder. And looking at the footage of Cordova, I realized that I can recognize 1940 Cordova from a panoramic shot way up Mt. Eyak, even though I’ve never done that particular climb myself. And maybe someday somebody can explain the shed in Anchorage with the sign that says “Anchorage Golf Club.” (Presumably on what is now the Park Strip?)

Normally, really, we don’t get a huge amount of time to spend actually reviewing the collections we hold. In this case, I was pretty sure we wanted to put them online through the Alaska’s Digital Archives and I needed to get a little more information about the content for the collection guide. That meant I needed to review them so I could describe them well enough to make them searchable. Then I had to run the mp4 access copies through a software that would allow me to add opening and closing titles and put a citation on the footage. That took about a half a day, partly due to my inexperience with that software (I got quicker!) but mostly due to the time it takes to export and save the final file. Then I loaded them up to our YouTube channel for hosting the video files and put links to them in the Alaska’s Digital Archives with all of the search terms. Getting all of this work done took me a few more days and thankfully there were times I could do other things while the computers were busy doing their thing.

So now with all that time elapsed, the footage is available for you to watch too. Each reel has 14-16 minutes of footage, so they don’t take very long to watch. I hope you find the footage as interesting as I did, and if you recognize anything in the footage: people, places, or events, please let us know! More description of the films and a link to them on the Alaska’s Digital Archives are in the collection description on our site: see the “Digitized copies” note to find that link.