Some of you may recall the earthquake we had in November 2018. Thankfully the archives didn’t suffer too much damage. Boxes off of shelves, but thankfully the boxes did their great protective job of the contents and the archival materials were fine, even if about 200 boxes had to be replaced. 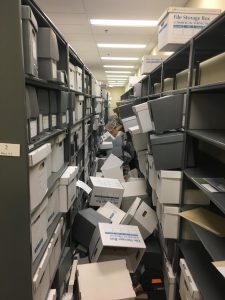 The first row of the vault. This was the one that required the most clean-up .

One of our harder hit areas was the shelving we’d been using to house oversize rare books. Maybe in a non-seismic area, this shelving would have been adequate, but on the Ring of Fire? Not so much. 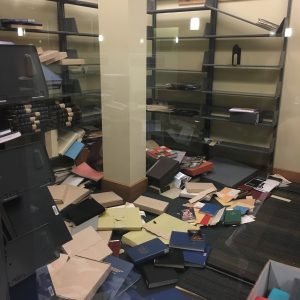 The problem is while the cost of the boxes was covered under insurance, replacement for the shelving was not. And it was clear that we couldn’t just put the books back on the inadequate shelving. Additionally, over the last year we’ve been gifted a number of very rare and expensive medical books, some of which were oversize, and while a lot of our oversize rare books aren’t particularly valuable (rare books joke: they’re medium rare), we wanted to be absolutely sure that these new additions were better protected.

So in hopes that funding might come through, Arlene drew up a diagram of what the footprint of some oversize shelving might look like, had some conversations with our sales guy Greg from SpaceSaver (who supplied all of our other shelving in the Archives), and got a bid for some shelving that would better support the rare books. 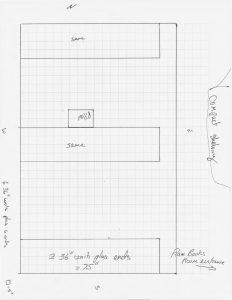 Arlene will never make it as an architect or surveyor, but thankfully our vendors figured it out.

Here’s something you might not know about the Archives budget. The Archives doesn’t really have a budget for archival supplies like boxes, photo enclosures, scanners, pencils. We’re allocated a certain amount every year in what we can spend, but that’s based on us re-earning that money from copy fees (xeroxes, scans, that sort of thing). And generally our income in that area is usually about $3500 in any given year. So the price of the shelving was way beyond our department’s ability to fund. And as many of you know, this hasn’t exactly been a great few years for the Library’s budget so the money wasn’t available through other Library funding sources.

But late this summer we got a copy order. For 28,000 pages. Gwen and Arlene put in about 110 hours of labor, put our overhead scanner to some hard use! and at $0.50/page, we had the funding for the shelving plus covering the rest of our standard supplies budget for the year. And the shelving order was placed. The rest of the oversize rare books were moved out of the space, the shelving was taken down, and just this week the new shelving was installed. 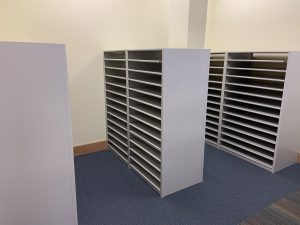 It’s so pretty! And so much more functional than the previous shelving. Next up: we’re going to have some of the Library’s student workers sort the books into call number order (when they came off the shelves, they didn’t stay in order!) and onto the shelves.

Thanks so much to everybody who helped out with this project so far. Thanks to Sam, Steve, and Shelby for getting the books out of the area so the shelving could be removed, to Susan for taking care of the order and payment, to Greg, Brae, and Rebecca from Southwest Solutions for coming up with the correct configuration of the shelving and handling the order from their side, and to our two efficient, kind, and entertaining shelving installers, Matt and Jerimy. And thanks to our very kind researchers who have been very patient and understanding of our issues with retrieval of oversize rare books. Hopefully we can speed up that access very soon!