Home Uncategorized New in the Archives: May 2019

This month was quite busy between receiving and describing new collections, preparing grant items for shipping to our vendor, editing and uploading two podcasts, and continuing to work on our electronic records.

William D. Workman papers; 1965-2005. HMC-1302. 6.5 cubic foot addition.
William Workman is an archeologist who has worked in a variety of Alaskan locations, primarily in southcentral Alaska. He worked as a professor of anthropology at Alaska Methodist University from 1969 to 1976 and at the University of Alaska Anchorage from 1977 on. Between 1970 and 1976 he was contracted by Alyeska Pipeline Service Company to do archeological surveys and expeditions along the proposed Trans-Alaska Pipeline route. The collection is primarily comprised of Dr. Workman’s professional and academic records. The collection includes field notes, notes, correspondence, reports, writings, class notes, and project records.

George Glotzbach papers; 1952, 1957-1957. HMC-1236-AHS. 0.1 cubic foot addition.
George Glotzbach was stationed at Elmendorf Air Force Base from 1956-1957. He was the Officer-in-Charge of the Alaskan Air Command’s Anchorage Courier Transfer Station. Glotzbach was a first lieutenant during his time in Alaska, and traveled to Nome, Fairbanks, St. Lawrence Island, and Unalakleet. The addition contained photographs, mostly taken in and around Anchorage.

Lanie Fleischer papers; 1970-2012. HMC-1326.
In 1973, Lanie, along with the Bike Committee succeeded in getting a bond issue passed to construct the Chester Creek Trail. Fleischer has continued to be active in civic and outdoor recreation organizations. She served as president of the Parks and Recreation Council of Anchorage and on the board of directors of the Performing Arts Center. Fleischer helped organize the Federation of Community Councils and the eight Community Councils in Anchorage, and she served as president of the South Addition Community Council. She was a member of the citizens committee to develop the master plan for the Park Strip in Downtown Anchorage and served on the Anchorage Veterans’ Memorial Committee. Governor Tony Knowles appointed Fleischer to the Trails and Recreational Access for Alaskans Board and appointed her chair in 1995. In 1994, the Chester Creek Trail was named the Lanie Fleischer Chester Creek Trail in her honor. The collection consists of materials related to the various causes and organizations that Lanie Fleischer has been involved with in Alaska, such as notes, meeting minutes, membership lists, publicity information, plans, and reports.

John Aho slides; 1971, 1994-2000. HMC-1325.
John Aho was born in Alaska. He received his PhD in aerospace engineering from Cornell University and was the vice president and principal project manager at CH2M in Anchorage, AK. Aho established the Alaska Seismic Hazards Safety Commission, which launched in 2002, and served on Anchorage’s Geotechnical Commission. The collection contains photographic slides depicting various buildings and houses, some of which were taken during construction, in Anchorage. The slides also depict Anchorage street scenes and aerial photographs of Downtown Anchorage.

Irish Club of Alaska records; 1988-2006, 2011, 2019. HMC-1324.
The Irish Club of Alaska is a non-profit organization dedicated to providing Alaskans with quality learning opportunities in Irish and Irish-American arts, language, music, and literature. A majority of this collection contains newsletters and member correspondence. 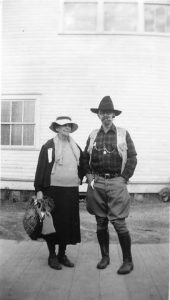 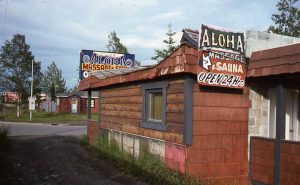 We completed two more multi-institutional libguides: Performing arts and Health and medicine in Alaska. These two guides, as well as 11 others were completed with funding provided by the Institute of Museum and Library Services through the Library Services and Technology Act, administered by the Alaska State Library. All of these guides are available on the SLED website. Stay tuned for Gwen’s blog post in the upcoming weeks regarding this project.

Podcast and other outreach

Veronica met with the Irish Club of Alaska for a donation party and tour of the Archives and Special Collections.

We also have two new podcasts available, one with researcher Dylan Harris and the other with archivist Becky Butler.

Dylan Harris is a Ph.D. candidate in the Graduate School of Geography at Clark University. Becky Butler is an archivist at the University of Alaska Fairbanks (UAF) Alaska and Polar Regions Collections and Archives.