In this episode of Archiving AK, Gwen, Veronica, and Arlene tell their tales of the November 30th 2018 quake here in southcentral Alaska and then get together for a discussion of lessons learned and things observed. It’s a little longer than our standard podcast, but we hope you’ll forgive us for that.

Below are some of the references made during the recording:

1:30 Photographs digitized for the project

15:20 About 130 boxes were on the floor in the archives vault after the quake. Even more were hanging off of shelves.

31:35 Kevin is Kevin Tripp of AMIPA. AMIPA shares our facility with us. Kevin is much taller than everybody else who works in the archives space. It should also be noted that AMIPA sustained far more water damage than we did, due to a wrecked pipe on the floor above that spilled water and glycol in part of their space.

Here’s a few photographs of some of the damage in our space. 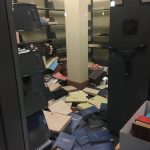 The oversize shelving in Rare.

The first row of the vault. This was the one that required the most clean-up and which Gwen and Veronica reference during the podcast. 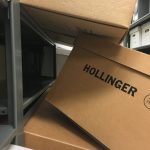 A closer look at some of the hanging boxes. This one was caught only by the boxes above and below, it was completely off the shelf otherwise.