Home Uncategorized The unpredictability of archives

The unpredictability of archives

I was telling somebody this story this morning and since it was way too long for a Facebook posting (you are a fan of our Facebook page, right?) I decided it would make a hopefully not too long blog entry.

I’m curious now: do you assume that usually only historians or genealogists use archives? Is this a widespread belief?

Shortly after I started at the Archives in late ’02 as reference archivist, we received a flurry of email requests for one collection and, more notably, one small section of one collection (one folder, in fact). This is a little unusual. The very nature of the research that brings people to archival collections means that the research is either fairly narrowly focused or rather unique. So even when a single collection gets a lot of use, it’s usually not the same few pieces of the collection unless it’s a pretty small collection.

Or so I’d always kind of assumed. I’m over that now, by the way.

Adding to the unusual nature of the requests was that almost all of them came from Europeans. And they weren’t your standard academic researchers. More on that in a moment.

The collection was the Alaska Repertory Theatre records. The subsection was the photographs. The folder within that, the production slides of the 1983-84 season production of the The Philadelphia Story.

Here’s a photo from the production and if you recognize the individual on the right, you might be suspecting where this particular story is going to wind up. 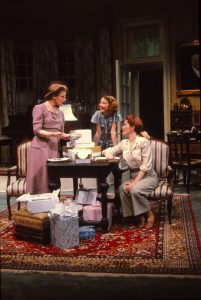 If you haven’t yet recognized her, that’s Kate Mulgrew. She’s been a well-known actor for some time, but the role that has probably netted her the most attention (if you have friends like mine) was as Captain Janeway of the Starship Voyager. And the requests we were getting for reproductions of the slides were coming from some of her fan club members in Europe who had seen that she’d been in the production at the Rep and searched for the Rep records and found our guide to the collection.

If I’d charted out our reference requests that year by type of user, Trekkers would have been a definite bump in the line. It was a fun summer, working with Star Trek fans from another side of the world.

And now you know, if you didn’t before. Not just historians and genealogists need archives.

By the way, we see people from almost every discipline and possible research area. Attorneys, scientists, anthropologists, fiction writers. What kind of research do you do that brings you into archives?