Home Facilities and equipment Break on through (to the other side)

Break on through (to the other side)

This is a post nearly 10 years in the making. It’s a saga about the best laid plans, unexpected quandaries, human error, strapping tape solutions, the benefits and drawbacks of computer programming, and what we hope is a HEA (happily-ever-after, for those of you not well-versed in romance novel speak.)

In 2003, the new addition to the Consortium Library was opened up. This meant a spectacular new space for Archives & Special Collections, including a beautiful research area with an inviting entryway where the doors would be cast wide open during our open hours.

And then reality struck the first day we were open. The climate control for the archives research area and the climate control for the hallway right outside the research area didn’t cooperate with each other very well. If the doors were left wide open, we had near-gale-force winds coming through the doors, across the reference desk, and into the research area. Well, for a research organization who still has the vast majority of their holdings in unbound, paper-based form, this was not doable. Not to mention whoever was on duty at the reference desk was always shivering! The doors needed to be closed. 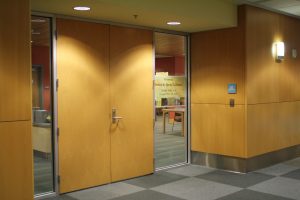 Suddenly all the best intentions were negated. The doors were designed to automatically lock upon closing so the doors were always locked whether or not we were open for business. Access became very, very problematic for anybody with mobility issues. And for some reason, people seemed to forget those big wood things with handles were doors, and would sometimes stand right outside them having conversations, talking on cells, just hanging out enjoying the vibrating floor there (that’s another story) right out of sight, and anybody exiting the area would run a heavy wood door right into them. Thankfully we hadn’t had any injuries, but we had a few near misses. About the same time we discovered that the left side door, the one we open when moving in large packages or prop open during events, the latch that unlocked it was two inches from the ceiling. That meant that the only people who could open that door without stepstool assistance were those over 6 foot or who had abnormally long arms, and that doesn’t describe the vast majority of us here at the archives.

More importantly, whether anybody was consciously aware of it or not, those closed big wood doors pretty much said “go away.” This was not ideal.

First, we had to figure out how to combat the whole “locked door” thing. I’m not entirely certain how this solution came about, but what we did was to take a 5″ long piece of packing tape, tuck under the ends so it could be removed easily, and place it across the latch bolt to hold it down. The tape went on every day at opening, and was pulled off every day at closing. Trying to be somewhat sustainable, we reused the same tape until all the glue finally gave way and then would do it all over again with a new piece. 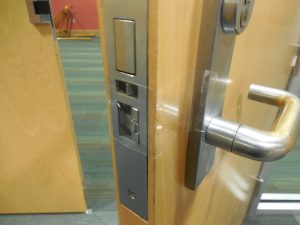 And then we discovered that people still didn’t know the door was unlocked. They’d come up, try to turn the handle, the handle wouldn’t turn, so they’d walk away. And I’d have to go chasing after them to invite them in. Not that I minded the exercise, but on occasion I wasn’t in earshot of the front door and so wasn’t aware that somebody had tried to enter. 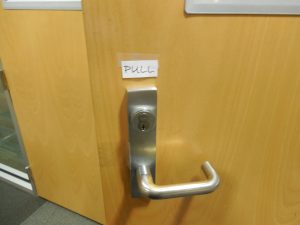 Thus the advent of the push-pull signs which we taped to either side of the door and yes, put on at opening and removed at closing.

And very quickly we made another discovery, related to the bit about people not recognizing that the doors were doors. In the first two weeks of having the doors closed, at least two people–that I witnessed–walked into the plate glass windows on either side of the doors. To protect the klutzy, I won’t tell you who they were, but they were library workers. Neither was injured, aside from substantial ego damage and one spilled cup of coffee, but we realized that if people who worked in the building (in one case, worked in the archives) were going to make this mistake, it was just a matter of time before this went very bad. In order to combat this problem and the additional problem that the original department sign was not all that visible anyhow (see the little turquoise square in the top photo) and AMIPA wasn’t mentioned at all, we took the opportunity to make a bigger sign, with hours and our phone number, and taped that up on one of the windows, and our colleagues at AMIPA put a sign up in the other. No more people walking into plate glass, and we had some visibility for the department names. Not ideal, but not too bad and fairly inexpensive.

But stepping back to the locking thing, I’m not sure how long the whole tape/untape, push-pull on/off daily thing went on for. My memory has it for several years, but truly, it was possibly only one or two years. I don’t recall exactly how it came about, but it may have been me complaining about the waste of tape after having replaced it for the umpteenth time and doing so in the vicinity of somebody with control over the systems. It turned out that the security/keypad/etc system that runs all this was programmable, and the doors could be set to automatically unlock and lock at opening and closing. No more tape, no more push-pull signs. The only weirdness was that the timing system controlling it all is only marked in 15 minute increments, so it was always a bit of a guess on the part of the person setting the times as to how close they actually were to the desired hours. (At the moment, it’s unlocking and locking at about 5 minutes past the hour.) But finally, a good and long-term solution to one of the ongoing problems and no more wasted tape. We had to install a deadbolt for those times when it was normal open hours and the library was open but for some reason we were shut (emergencies, university holidays, so forth) but as long as we remembered to turn the deadbolt on our way out the door at one of those times, we were good to go on that.

But we were still faced with heavy doors, problematic access for anybody with mobility needs or anybody carrying anything, the “people not recognizing the door as a door” thing, the too-high lock on the left door, and of course, the fact that the heavy blank closed doors still shouted “go away.”

And then came this year, and a chance within the budget to do something better. And my main requests were four: big windows cut in the doors, a handicapped access button, a left door mechanism that didn’t require I climb on a stepstool to open it, and a bigger sign above the doors indicating the department name. All of which we got. So here you go: the beautiful upgraded entry to Archives & Special Collections. I’m immensely proud of it and I hope you find it much more inviting, too. 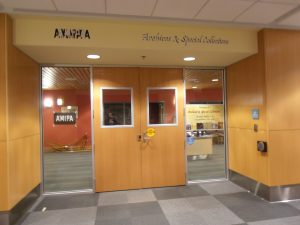 Next up: putting the hours and phone number on the windows and getting rid of those departmental signs!

In the meantime here’s Michael “Other Duties As Assigned” Catoggio demonstrating the access button for you.