Home Acquisitions Where, what, when, why and mostly who

Where, what, when, why and mostly who

One of my standard instructional statements when helping students learn about how to find primary source materials is: Who would have had a reason to document what it is you’re trying to study? Find the who, find the record. Find the who and the why, and you can learn a lot about how it might apply to your research. The where, what, and when are often ways of narrowing down your results list.

That’s fairly simplified, but it’s not bad for a research rule of thumb.

In a prior job, I worked in a state archives. And in that job I often worked with vital statistics types of records. So death records were often my go-to example of the above principle. See, a lot of the US states and territories started documenting deaths formally shortly after 1900 or so. As I’ve had it explained to me, it was largely an outgrowth of the Progressive movement, and an interest in documenting infant mortality rates. The creation of birth records were quickly, if not concurrently, developed with the death records. If you’re trying to track infant mortality, you need to register births as well as deaths. Hence the role–in many places–of the state or territorial health department being the organization charged with tracking these events and administering these documents. In essence, it was a public health concern. In fact, the vast majority of the information contained in early and some contemporary death certificates are ways of tracking epidemiological issues: disease outbreaks, genetic components (including parental information), and so forth.

I found myself explaining this why a lot to researchers at the state archives where I worked. Why? Because the people working with death records were often not using them for the same purpose they’d been created: they were working with them for genealogical or family history research purposes. Knowing the who would help them find the documents. And knowing the why of the creation of death certificates could assist them in evaluating the reliability of the genealogical information contained on those certificates. Birth place and date of mother of the deceased? If it’s a distant relative or friend reporting the information, might s/he even know this with a certainty? Or if the reporter it is a close family member, perhaps after the death of a close relative is not the time they want to be thinking about details as to where Dad was born?

As an archives at a university, we don’t take in governmental records, so we really don’t have anything in the way of death certificates and so forth. But we were recently given a collection that also meets the “who” test for finding death records: aside from the state or territory documenting deaths, who else would? Perhaps the individuals and companies responsible for caring for the deceased post-death. The mortuaries. The funeral homes. Undertakers.

Now these don’t always make their way into permanent–and public–holdings. As private companies, sometimes the records aren’t retained. But recently we were contacted by a grandchild of Luella Kelsey McMullen James. Luella lived in Seward in the 20s, 30s, and 40s, and during that time she was married to P.C. McMullen who ran the Seward Undertaking Company. After his death and her remarriage to Ray James, she continued to run the company. The employees of the company kept registers of their work, Luella James kept the registers, passed them down to her daughter Jane Behlke, and from there to Jane Behlke’s children. One of those children, James Behlke, with the permission of his sisters, recently contacted us about finding a research home for these materials. And we, of course, said “yes!”

In the registers, the employees of the company tracked the individuals whose remains they handled, and while those register pages often include the costs of and payment arrangements for the funeral and details of the funeral, the pages also include many details that might more typically be found on a death certificate. (Genealogists and family historians take note: the registers were pre-printed forms on each page which means these were being produced for sale to funeral homes: this type of record might exist for other locales, too.)

As I was trying to review the registers quickly this morning, trying to get the guide written as quickly as possible, I kept getting slowed down by the content of the books. Fascinating information with a wide variety of possible research uses. See, these books aren’t just about the deaths of Seward residents. They document deaths of individuals who were brought to Seward to stay at the tuberculosis sanitorium, the federal jail, Fort Raymond during World War Two, and sometimes even the ships that docked there. If someone died en route from another port to Seward, a regular stop for the Alaska Steamship Company, their remains would be brought to undertakers in Seward. And the causes of death: what a fascinating study. Or even the individuals: the mother and infant in Moose Pass who died as a result of burns to face and neck. Or the unknown individual, dead of a gunshot wound, found later. What were their stories?

Knowing the who might also explain the information in the record and what’s missing from it. This isn’t a comprehensive register of deaths in Seward. For example, 15 of the individuals in the registers are identifiable as servicemen serving at Ft. Raymond. According to at least one genealogical website online, 20 soldiers died there during 1942-1945. And P.C. McMullen, the former mayor of Seward and owner of the company, isn’t listed in the register either. And even within each registry entry not everything is filled in the same for all individuals: one early one for a “sporting woman” with an alias of “Babe Smith” has no data as to her place or date of birth, her family, and so forth. Similar for some of the cannery workers or steamship crew or passengers.

Since I don’t like to share my musings about documents without showing examples of documents, here’s a photo of one registry page for a man named Vito Phillippse. A man of approximately 34 years of age, he was a victim of the 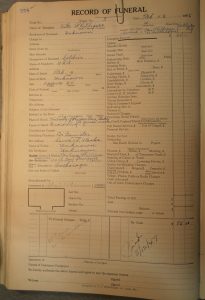 S. S. Yukon shipwreck at Johnstone Bay near Seward on February 3, 1946. Of the 385 passengers and crew aboard the Yukon, the lives of 11 were claimed by the wreck. (That data comes from the McCurdy’s guide mentioned in our last blog posting.) Vito was the only individual from the shipwreck listed in the Seward Undertaking register. He was a passenger aboard the ship, one of many servicemen aboard who were en route back to the Lower 48 after the end of the war. So sad to think of a family about to be reunited after the war, to lose their serviceman on the way home.

Which leads me to the last piece of archival advice I often give people: be willing to be flexible in your intended research path once you start working in the primary source documents. You may find a different angle, perhaps even a more interesting story. I look at these registers and see so many different stories, so many different research angles. I hope you’ll find some of them too. And if you’d like to start looking at this collection, the guide is now online.