Eye of the beholder 2009 exhibit

It’s coming up on the end of the fiscal year, traditionally a time when I try to finish off projects or clean up my office. In that spirit, I’ve been meaning to go online with some of our Eye of the Beholder exhibits. For those of you who watch this space, Eye of the Beholder is an annual exhibit we mount every October: we choose a single photograph from our holdings and ask people to provide interpretations of it. And for a variety of reasons, the first one in 2008 is the only one I’ve managed to take online. Over the coming few weeks, I’m going to try and rectify that.

First up is Eye of the Beholder II from 2009. The image we chose is: 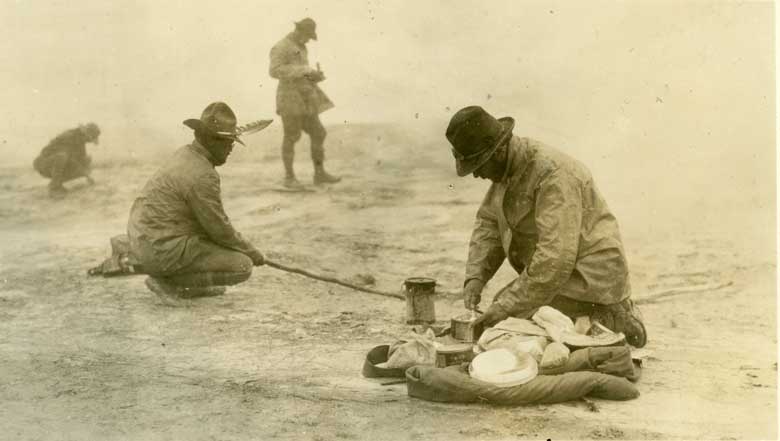 This image was taken in 1919 by Emery Clifford Kolb in the Valley of 10,000 Smokes. The caption reads: “Cooking over fumarole 5.”

It was a bit of a hike to the nearest source of wood from the Valley, so the expedition members occasionally made do with local resources.

But enough of my talking about it. I’d rather let our guest curators share with you what they thought about this image.

For example, Terry Naumann, an associate professor of Geology at UAA. This was what Dr. Naumann wrote:

On June 6th, 1912, over 13 cubic kilometers of magma was explosively erupted at Mount Katmai, creating the Valley of 10,000 Smokes. This was to become the largest eruption of the 20th Century. In the photo, the “smokes” they are cooking over are actually steam vents created by the overlying hot ash boiling water now trapped deep within the buried Ukak River valley below.  Although these vents provided a convenient place to cook, these gases were very acidic and must have taken their toll on equipment and lungs.

The scientific interest and funding to launch such an expedition to this remote corner of the world was due, at least in part, to the interest created in volcanoes by another eruption that had occurred 10 years before Katmai on the other side of the world. In 1902, the eruption of Mount Pele volcano on the Caribbean island of Martinique killed over 20, 000 people in the nearby town of St Pierre. Following this great tragedy there was a tremendous surge to study volcanoes worldwide.

Near the end of the 20th Century, Katmai would again be linked to another volcanic disaster on the other side of the world. In June 1991, almost 80 years after Katmai eruption, scientists from the United States were flying to study Mount Pinatubo and passed over Katmai on their way to the Philippines on a clear Alaska day. They looked out the window and saw the smooth ash deposits and reflected on the 1912 explosive eruption. Later, when they reached Mount Pinatubo, they noticed the terrain looked surprisingly similar to area around Katmai and realized that explosive eruptions were likely to occur there also. A few weeks later Mt Pinatubo erupted over 8 cubic kilometers of ash.  But unlike Mount Pele in 1902, few people perished this time, due in large part to the prior understanding of these types of eruptions that was gained at places like Katmai.

We have quite a few more submissions to go on this one, but this entry is already getting long, so I’ll continue on with more of them from 2009 later this week. Enjoy the creativity and if this inspires you to join us for future Eye of the Beholder exhibits, keep an eye on this space: we’ll be announcing the photo for Eye of the Beholder V (October 2012) later this summer right here.