The Olavi V. Kukkola papers is a new collection at Archives and Special Collections that consists of Kukkola’s professional papers, engineering schematics, a developmental proposal, a technical diary, and several photos of his campsite. The subject of the collection is the construction of the Whittier Tunnel from 1941-1943 during World War II by the West Construction Company and Army Corp of Engineers.  Olavi Kukkola (1916-1982) himself was an Alaskan born Finnish American who graduated from the University of Alaska with a degree in engineering. The Army Corp of Engineers hired Kukkola as an associate engineer under Anton Anderson to oversee the Whittier side of the tunneling project.

The Corp of Engineers required Kukkola to provide them with daily reports on the progress of the tunnel project. Kukkola kept a technical diary that served as a daily logbook where he noted weather conditions, staffing needs, and overall progress of the work completed. The diary contains several entries that describe the problems Kukkola faced at his camp and the methods he used to solve them. One of the problems involved the arrival of a new bulldozer for the camp that Kukkola and his men had to transport from the Portage train terminal to the Whittier campsite about five miles away without the use of a road. Kukkola and his men worked 12 consecutive hours in the rain while installing planks on the railroad tracks in order to move the bulldozer across Portage Pass and down to the campsite. In his diary entry dated May 2, 1941, Kukkola included a drawing, pictured at left, that described the method he used to install the planks and transport the bulldozer down the railroad tracks to the access point of the camp. 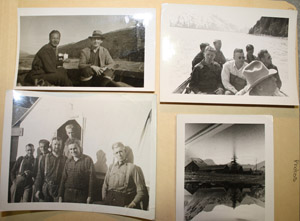 Kukkola, his crew, and camp during the construction of Whittier Tunnel

In the early entries of the diary, Kukkola documented the conditions that he and his crew had to overcome at the early stages of the tunnel project, including the lack of potable water, power, and adequate shelter for the crew. The men adapted to the conditions by transporting drinking water in barrels from Portage Lake and using off track rail cars for shelter. In the months that followed, Kukkola and his men constructed a power facility, a plumbing system, and shelter for themselves as well as the anticipated laborers to arrive for the tunnel’s construction.  A selection of photos from the collection, pictured at right, shows the camp and crew who worked on constructing the tunnel.

Another technical drawing from Kukkola's diary

I am currently conducting research on the Alaska’s military projects during World War II and why some projects, such as the ALCAN, received national acclamations, while others garnered only regional headlines. The ALCAN used African American and white military regiments, while the Whittier tunnel was a joint construction project between civilian contractors and military engineers. Why did the Whittier tunnel fail to garner the same recognition as other Alaskan defense projects? Was the addition of African American regiments to the ALCAN the reason it made national headlines? Lastly, I want to know why a military project that was allegedly a vital piece of Alaskan defense during World War II barely mentioned, if at all, in history books.