Photos in the Archives: Stereoscopes 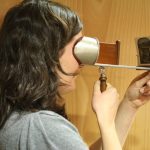 A stereoscope consists of a pair of hooded lenses, each lens spaced exactly the same distance apart as a pair of eyes.  These lenses are mounted on a wooden handle, with a long wooden slide attached to the back.  A moveable wire rack, into which a stereoview card can be inserted, is fitted onto the slide.  To “operate” the stereoscope, the viewer holds it by the handle in one hand, looks into the lenses, and then moves the wire rack holding the photo back and forth on the slide until the two images on the photograph merge into one and become three-dimensional. 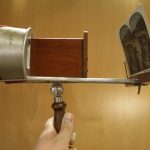 Nineteenth-century stereoviewers range the gamut from ornate to simple.  I’ve seen ones made entirely of wood save for the glass in the lenses. Ours, the patented “Perfecscope,” has a hood made of metal, stamped with decorative vines and lined with faded red velvet, on a polished wooden handle and slide. As is the case with most scopes of this construction, the handle is made to fold flush against the slide for safe storage.  The metal is also stamped with the seal from the Exposition Universelle Internationale, indicating that it was likely purchased at that world’s fair held in Paris in 1900.  Stereoscopes like these are still manufactured, but today’s scopes are more likely to be a simple pair of folding plastic lenses, to be perched on the nose like pince nez or the anaglyph glasses that are handed out in our contemporary 3-D films. 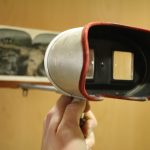 It’s interesting to think that, in today’s archives, we most often look at stereoviews without the aid of the stereoviewer.  I once knew a museum curator whose preferred method was to simply cross his eyes to see the three-dimensional effect.  But far more likely, we just view the two mounted photographs as is, looking only at one of the images and ignoring the reason the second is also there. In the nineteenth-century, this would have been anathema: stereoviews were created — and owned — specifically for the purpose of that three-dimensional effect.  When we digitize stereoviews for online viewing, we remove the stereoview one step further from its intended use; at least in person, one has the choice of using a handy stereoscope, if available. In order to digitally view a stereoview in 3-D, it needs to be run through software that merges the two images — and then, again, a special digital stereoscope must be used to actually see the image accurately.  We do ourselves — and the photographs — a disservice by not using stereoscopes to view these photos as they were meant to be seen, full of life, depth, and detail.