I have been steadily working through the Alice Brown papers and discovered that we share a common characteristic; we doodle when taking notes. Amidst Alice Brown’s handwritten notes are doodles she did during meetings. These doodles range from simple boxes she drew around notes she wrote to elaborate pictures. Below are examples of doodles from her collection: 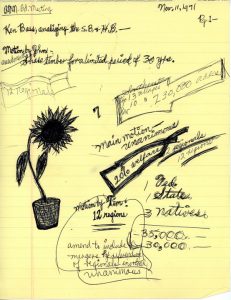 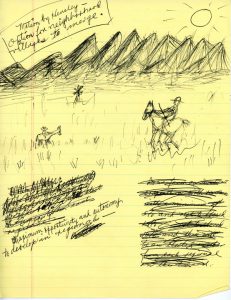 These notes were taken during an Alaska Federation of Natives board of directors meeting. Alice attended the meeting as Cecil Barnes’ proxy. The first page is dated November 11th, 1971, while the second page is undated but appears to have been taken at the same meeting. I decide to follow the doodles and notes like signs and get some context for what she may have been listening to or talking about while she doodled the flower, encased certain notes in boxes, and created the Don Quixote picture.

I turn to the November 11 meeting minutes. After looking at the board meeting minutes from that day the notes start to make sense. For example, from 10am to 2 pm (with a lunch recess before 12pm), Ken Bass and the board of directors discussed the House and Senate bills that were passed and the upcoming joint House-Senate committee meeting. That is a lot of time to doodle. The “motion by John” to share timber for a limited period of 30 years was John Borbridge’s amendent to the motion to “accept recommendations to the White House made by counsel for the sake of discussion.” It passed unanimously. John Borbridge then makes a motion to include non-reservation Tsimshians in the land claims bill, this is seconded by Alice Brown. It passed by majority. She did not take note of this motion in her notes.

On the next page of notes is where Alice drew a picture depicting Don Quixote, Sancho Panza, and the infamous windmill. Alice probably drew the picture during the latter half of the meeting. The crossed out text references a motion to create investment corporations that was eventually replaced with the motion that regional corporations would be in charge of their own “revenue-producing activities.” Alice adds her own two cents about the motion that passed unanimously: “maximum opportunity and autonomy to develop in regionals.”

So what does this all mean? To put these notes into context, the House and Senate had just passed their own versions of the Alaska Native Claims Settlement Act. And a joint committee of the House and Senate would convene to hash out the final bill. I can’t help but wonder if the Don Quixote, the ‘idealista,’ in the picture will catch up to Sancho Panza, the ‘realista’ and if Alice Brown saw that ANCSA would be more than a hope or idea; it would be a reality. Or conversely, did she worry that her ideal Alaska Native Claims Settlement Act would be supplanted by an ANSCA bill that could realistically come into law? Or did she simply like the story of Miguel Cervantes’ Don Quixote? We may never know. In the end, the notes and doodles provide insight into the final months before the passing of ANCSA in December 1971. Plus, we know that she draws fairly well!