I’ve been working on preparing digital files of some photograph albums of late, for eventual posting on the Alaska’s Digital Archives site. No, that’s not the deadliest/dirtiest job nomination, I’m getting to that in a minute.  But first, let me tell you a little bit about these albums.

About a year ago we were given a set of three photograph albums by Dave Bouker of Dillingham.  The albums had been given to him by Larry Eastman who also took most of the pictures in them.  The albums date from approximately 1949-1951.  In that time frame, Eastman and Bouker served together aboard the Bittersweet, a U.S. Coast Guard buoy tender that was homeported in Kodiak but served the Aleutians and Bristol Bay area.  Very cool photographs of the area and of operations aboard ship.

I’m working at a pretty quick pace as I manipulate the digital files to prepare them for going online.  So I look at the photos, but I don’t usually see them, if you get the difference. But for some reason, this one jumped out at me. 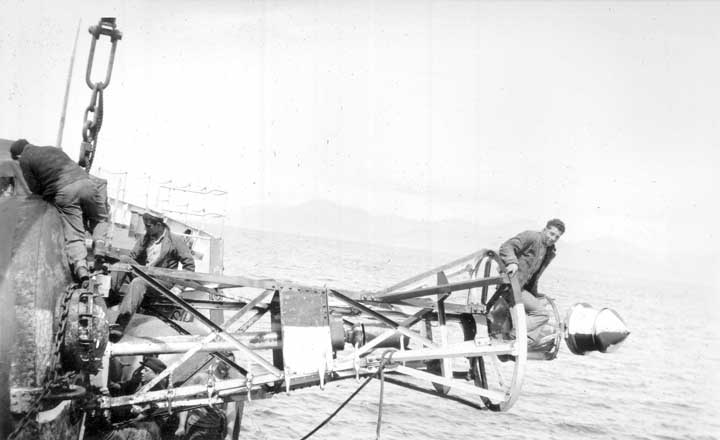 Based on this photo alone, I nominate this job for one of the filthiest and most dangerous jobs out there. For starters, there’s the whole thing about the being stationed on a buoy tender out in the Aleutians–which while a much-needed duty!–was probably not regarded as a plum posting amongst Coast Guard servicemen. Then you look at the picture.  Any one of the jobs these guys are doing has such potential for loss of limb and life, though the guy hanging out on the end working with the light (I’m pretty sure that’s Dave Bouker by the way) might have a slight edge on the rest. He’s not even wearing any kind of safety gear!  Any chop at all and this buoy is going to be moving around. And ropes and chains aside, this still looks like work for very agile, strong, and nervy individuals.

Also ones who don’t mind working with the detritus of sea fauna and flora–all those white blotches on the buoy? I’m fairly certain that’s bird guano.  Fun times.

Actually, Dave Bouker sat down with me and the albums last year and we went through them and he told me stories about his time aboard the Bittersweet.  Maybe it’s just the distance of time, but it really did sound like he had a fun time. I certainly had a great time hearing the stories, even though I was occasionally thinking “ick.”

Prior to seeing the albums, I hadn’t really thought about the fact that somebody, somewhere, had to be taking care of all the navigational aids along waterways, whether buoys, or lighthouses, or even other lighting systems along rivers.  And to suddenly be presented with such clear evidence of what that work entails! But now that it’s been brought to my attention, I’m so grateful that somebody, somewhere does this. I love being out on boats and it’s nice to know that even in remote areas, this is somebody’s job.   Even if nobody ever does a reality show about it.