If you’re just tuning in, we’re celebrating Black History Month here at the Archives & Special Collections blog (with a brief detour for some Valentine’s Day affection).  Mariecris and I have been highlighting collections from our archives that focus on the history of blacks in Alaska, and the collection that I’d like to focus on today is the Alaska Black Caucus, Inc. records.

The Alaska Black Caucus was founded in 1975 as a non-profit organization whose purpose was to advance the educational, cultural, political, and economic well-being of African Americans in Alaska.  Many prominent black Alaskans were involved in the Caucus during its heyday, including our current Democratic state senator Bettye Davis and Anchorage journalist and activist E. Louis Overstreet, who Mariecris wrote about last week.  Our collection of archival material relating to the Caucus documents the history of its operations from its founding up to 1993 and includes the organization’s business correspondence and records, newsletters, photographs of its activities, speeches of its directors, and a series of scrapbooks (shown in the photo here) that offer a window into the first decade of the Caucus’s political and social influence through newspaper clippings, photographs, and event programs.

For me, though, the most interesting materials in the collection are the Alaska 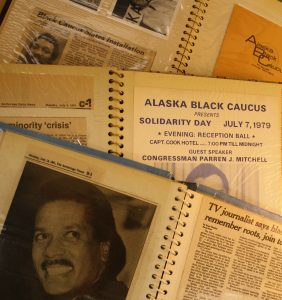 Black Caucus’s position papers on a number of local and national concerns facing Alaskans in the late 1970s through the early 1990s.  The Caucus presented these papers to the Alaska legislature nearly every legislative session as official statements of support for or argument against proposed bills and other significant issues impacting black Alaskans.  The topics vary from issues of obvious relevance, such as sentencing patterns of minority offenders in the judicial system and affirmative action hiring practices in Alaskan industries, to more obscure concerns like the Caucus’s support of voting rights for the citizens of Washington, D.C.  Additional letters to Alaskan governors and other public officials over the years reveal the Caucus’s more personal commentaries on black appointments to government positions or the effects that changing taxation policy would have on the state’s minority populations.  It’s a fascinating glimpse into the changing concerns of Alaskans over nearly 15 years and the ways in which the Caucus sought to influence or respond to legislative opinion on issues that could impact the quality of life for black Alaskans.