So I (Arlene) dressed down today, figuring I was going to spend the afternoon in the vault moving things about.  We’ve been slowly moving boxes off the tops of the shelving for two reasons: 1. maybe someday we’ll get compact shelving for the space and if we do, we’re not going to have 8 shelves, so why not move it now before it becomes a logistical nightmare?  and 2. on the chance that anything ever leaks through the ceiling, the shelves can do their job and protect the contents like a lid.  Plus, let’s face it, I’m short.  5’5″ on a good day. And even on our safety ladders, I’m still reaching over my head to pull off very heavy boxes.

So I started moving one collection over to another bay, seeing if I could fit it all in, when for some bizarre reason, I decided to look inside one of the boxes.  I think I’d noticed it was kind of light and thought maybe I could consolidate it into a smaller box.  And this is what I see. 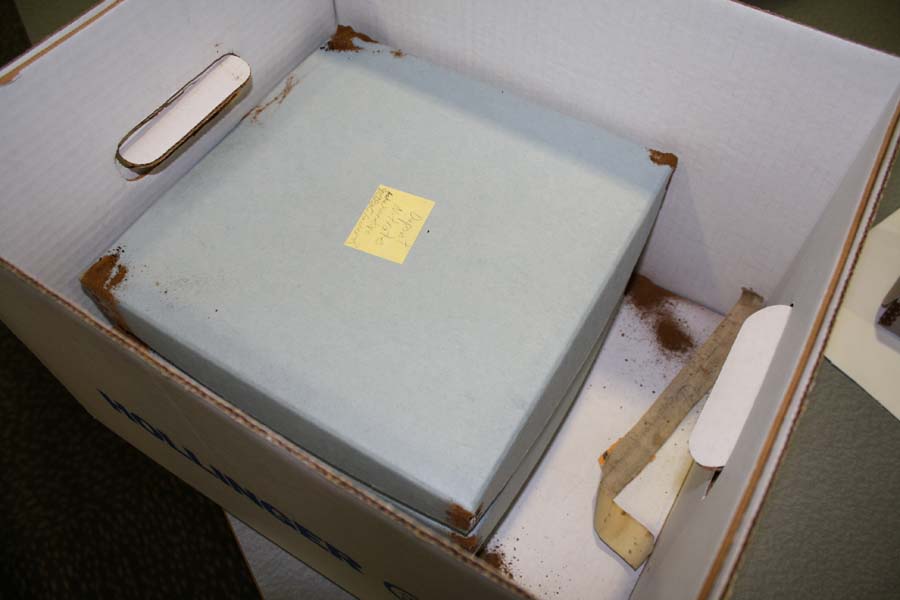 photo of boxes with oxidized edges.

Which puzzled me.  The boxes looked totally fine, but the metal clasps on the edges were nearly rusted away.  And then I saw the note on the top, sigh, which read “nitrate.”

I went and fetched some tissue paper to place on the table, some nitrile gloves out of the crash kit, and gingerly lifted the first box out.  A small microfilm-sized box, film didn’t look that bad, but was obviously oxidizing some.  In the meantime Mariecris was assuring me that indeed degrading nitrate film could produce this effect on metal in the vicinity.  Lovely.  But the film didn’t look like it should be producing this level of results: it really was in fairly good shape.  I’d seen nitrate film at further levels of degradation and they certainly hadn’t done this amount of damage to the metal film cans they were housed in.

And then, then I opened the second box.  I’ll show you a bigger picture here. 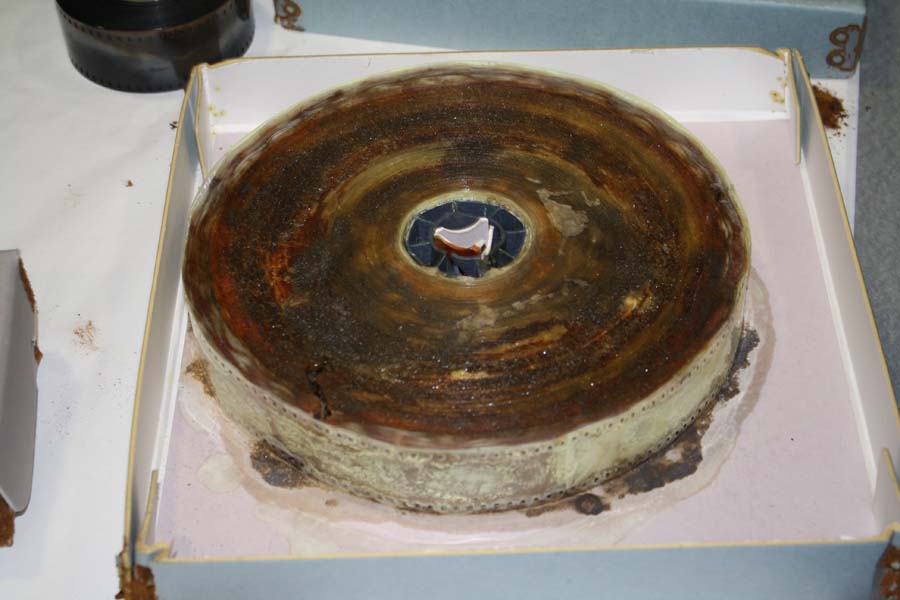 Here’s a close-up view for an even better look. 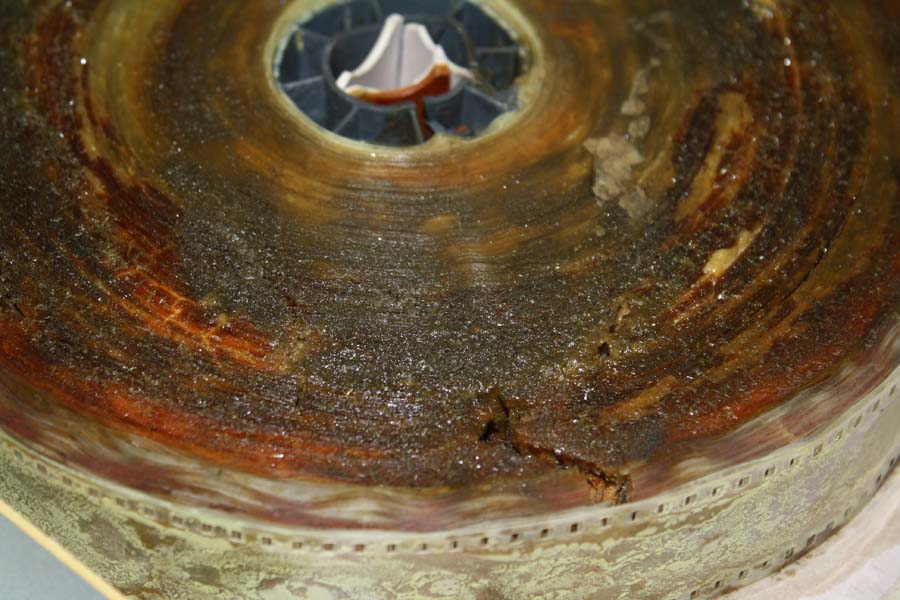 close up of degraded nitrate film

I immediately called the university’s risk manager and left a message asking him to call me back with what needed to be done to dispose of this.  We haven’t heard back yet.  And for some unknown reason, I kept opening film boxes.  And one more film looked exactly like this one.  But the other two remaining ones didn’t look bad at all.  In fact, they looked like they were in really good shape.  We pulled Kevin from AMIPA over and asked.  He took a look and said that the degraded copies were the positive, the intact copies were the negatives, and it was the difference in film stock that would account for it.  And that the negatives could be saved. 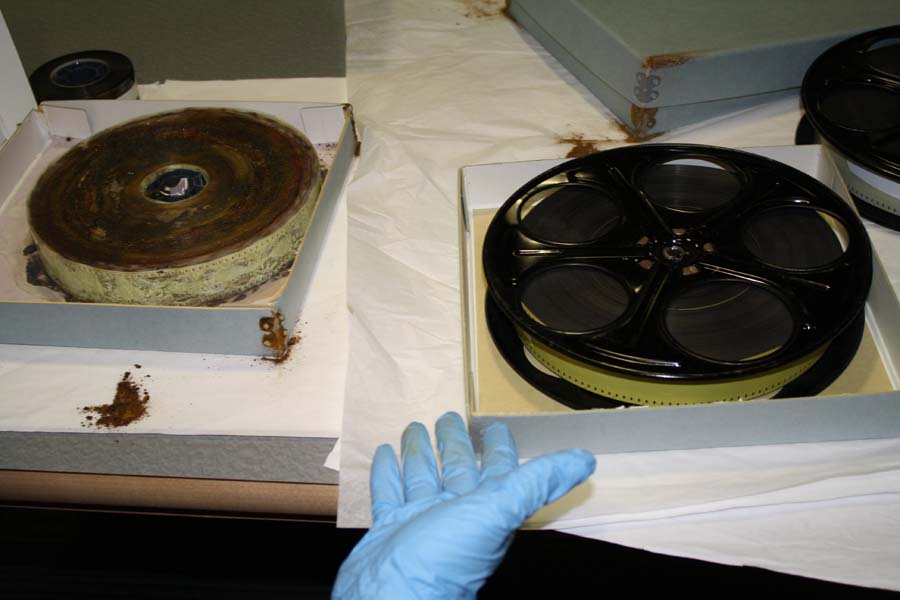 showing the difference between the negative and positive film

Which is something of a relief, albeit now comes the expensive part.  Getting the good film to someplace that can store the nitrate for us, since we really shouldn’t have it here, and seeking out funding to have it converted so we can still include it as part of the collection from which it came.  We don’t know what’s on them, but one reel purports to be footage of the breakup at Lake George.  Lake George used to (doesn’t anymore) grow immensely during the summer due to glacial melt and then at some point the water pressure on the glacial dam holding the lake in place would burst through the dam and suddenly downriver had flooding.  Apparently it was quite the notorious event.

So this could indeed be important footage.  But the only way we’ll ever know that is to get the funding to have that done.  When we do, we’ll let you know.  In the meantime, we’re gingerly storing the good copies in a nice place in our vault–not too close to anything important–and we’ll await the call from our risk manager to see what can be done with the bad stuff.  And I’ve also asked Mariecris to do a blog entry on this since this is much more her area of expertise than mine.  So maybe you’ll get the smart version of this report next week.

In the meantime I’ll hope that the fumes aren’t too problematic healthwise, and maybe I can get back to my re-shelving in the vault.  For somebody who planned to spend the whole day doing this, I think maybe I’ve managed to eke out about a half-hour.  But I keep telling myself every bit helps.  And if I hadn’t done this, how long would it have been until we noticed this problem?  It’s entirely possible this box hasn’t been opened since the collection was processed in 1996.  I don’t know what shape the film was in at that point, but I’m certainly hoping it wasn’t at this level, else why even save it?   The archivist’s life.  Always full of danger and intrigue.  And that’s just when you’re reshelving!