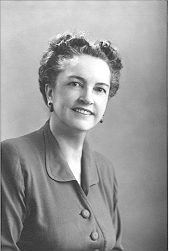 Biographical note:
Alice “Dove” Montgomery was born near Perry, Oklahoma. She obtained a Bachelor of Arts from the University of Oklahoma (1922), a Master of Arts in English from Columbia University (1927) and a Master of Social Work from the University of Oklahoma (1940). She was a newspaper society and feature editor (1922-1923). She taught English at Fairfax High School (1923-1926); the University of Oklahoma (1927-1933); and Oklahoma City University (1933-1935). She married Alexander E. Kull in 1925. He died in 1953. She entered the field of social work and child welfare during the Depression and worked for various federal and state agencies in Oklahoma (1934-1954) and for the Salvation Army in Oklahoma City (1954-1959). Dove Kull moved to Alaska in 1959 to work in child welfare in the Department of Health and Welfare (1959-1967) in Anchorage and, later, in Juneau. She was instrumental in the establishment of the state’s first accredited child care center(1961). She was a clinical social worker for the Federal Public Health Service at Kotzebue (1967-1968); and the director of Alaska Homemaker Services, Inc. (1968-mid 1970s). Dove Kull was active in working for senior citizen’s and women’s issues and served on several planning and advisory groups. She was instrumental in the establishment of the Older Alaskans Commission (1981), and was an organizer and a president of the Juneau branch of the American Association of Retired Persons. She was also a member of several professional organizations. She received numerous honors and awards including an honorary Doctor of Humanities from the University of Alaska Southeast (1987). She died in Juneau, Alaska in 1991.

Collection description:
The collection consists of papers relating to Dove Kull’s life, her activities in the field of social work and child welfare, her activities on behalf of senior citizen and women’s issues, and her travels. Materials include personal papers, including legal records, honors and commendations, degrees and certificates, employment, and community and volunteer activities; correspondence; unpublished writings, including books, articles, poetry and school papers; travel journals and papers; field trip files; subject files; photographs, including a photograph album, including prints, negatives, and slides; motion picture film; audio tapes, including an interview of Dove Kull by students and teachers at Capitol Elementary School in Juneau; newspaper clippings; scrapbooks; and artifacts and personal memorabilia.

Arrangement:  The collection is divided into eleven series (click on each to go to that part of the guide, or scroll down to see the whole guide):

Alternative formats: A VHS reference tape of the motion picture films is available in the collection.

Digitized copies: Selected items from the collection have been digitized and can be viewed on Alaska’s Digital Archives. For information about obtaining copies please contact Archives and Special Collections.

Rights note: Copyright to materials authored or created by Dove Kull has been transferred to Archives and Special Collections.

Acquisition note: The collection was initially given by Dove Kull to the University of Alaska Anchorage’s Social Work department in 1991 and then transferred to the Archives. A deed of gift was signed James Fisher, Dove Kull’s attorney, in 1991 and papers were added to the collection in 1993 by Mrs. Edna March.

Series 2: Correspondence; 1926-1991. 1.15 cubic feet.
This series consists primarily of personal correspondence between Dove Kull and various family and friends in and out of Alaska. There also are copies of Christmas cards sent by Dove Kull, incoming files of correspondence and Christmas cards, invitations received by her, and address books. Arranged by type.

Series 4: Travel journals and papers; 1925-1983. 0.25 cubic feet.
This series consists of journals kept by Dove Kull during various trips abroad and in Alaska. Included are journals from her trips to England and Europe (1925), the Pribilof Islands (1959), Valdez and other places in Alaska (1960-1961), Asia (1961), Russia and Scandinavia (1964), Haiti (1977), Tahiti (1979), and other places. Included with some of the journals are articles, tourist information, and other similar papers. Arranged chronologically.

Series 5: Field trip files; 1960-1974. 0.25 cubic feet.
This series consists of papers relating to Dove Kull’s field trips to various villages and communities in Alaska as part of her work as a social worker with the Alaska Department of Health and Welfare. The papers include trip summaries, community descriptions, notes, and other similar types of records. Arranged alphabetically by name of location.

This series consists of papers relating to organizations in which Dove Kull was involved, people, commissions on which she served, and issues in which she was involved. Included are records concerning the American Association of Retired Persons, the Alaska Women’s Commission, AWARE, child welfare, the Alaska Department of Health and Welfare, Home Health Service, the Equal Rights Amendment, the Longevity Bonus Bill, the Older Alaskan’s Commission, women’s issues, senior housing, the Works Progress Administration, and other subjects. Arranged alphabetically by subject.

SERIES 7: PHOTOGRAPHS AND FILMS; 1943-1987. 3.7 cubic feet.
This series consists primarily of photographs, negatives, and over nine thousand color slides (mostly 35mm) slides taken by Dove Kull and friends during her life and activities in Alaska. Subjects include family and friends; views in and around Juneau and other Alaskan towns and villages; Alaskan scenery; senior housing in Juneau; Alaska Homemaker Health Service training classes; the 1962 Seattle World’s Fair; travel in Washington State and other parts of the U.S.; and trips to Canada and other foreign countries and other subjects. There is also 8mm motion picture film, a videocassette of Dove Kull’s appearance on the local television feature series, Rain Country, and a photographic album from her trip to England and Europe in 1925. Arranged by type, thereunder chronologically or by location or topic.

Series 8: Audiotapes; 1974-1988. 0.2 cubic feet (5 60-minute audiocassettes.)
This series consists of audiocassette recordings of various subjects. It includes an interview of Dove Kull by students and teachers at Capitol Elementary School in Juneau. The series also includes a recording of a Alaska Homemaker Program Health Aide Service Corporation board meeting, a speech by Mario Cuomo to the Democratic National Convention, and a home recording of fiddle and banjo music by George McCurry and Glenn and Emmett McCurry (relatives of Dove Kull). Arranged roughly chronologically.

Series 10: Scrapbooks; circa 1930s-1960. 0.3 cubic feet.
This series consists of two scrapbooks of newspaper clippings and articles. One scrapbook concerns FERA and the Great Depression in Oklahoma (circa 1930s), and the other scrapbook concerns Alaska and Anchorage (1959-1960). Arranged chronologically.