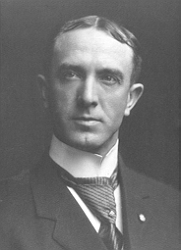 Biographical note:
Charles Goodyear Hubbard was born in 1869 in Shermantown, Nevada. He taught school for two years in eastern Nevada after graduating from high school. He also studied mining on his own and prospected. In 1888, he moved to San Diego where he continued his study of mining and prospected in California and Arizona. He married Bertha Huntley in 1891. In 1895, Hubbard moved to San Francisco and prospected in Central California before going to work for the newspaper, San Francisco Call. In 1897, Hubbard left California to prospect in Alaska. He made his way up the Copper River to Bremner where he met his future partner, Harry Elliot. Together, Hubbard and Elliot located and staked out 120 copper claims along the Kotsina River, thirty-two of which they later patented, and formed the Hubbard-Elliot Copper Mining Development Company of Alaska. The Company began to decline after the death of Elliot in 1909 and was eventually dissolved. In 1910, Hubbard acquired eight placer gold claims on the Upper Kenai River near the town of Seward. That same year he also dredged for gold on Cooper Creek as head of the Kenai Dredging Company. He established the Primrose Mining Company, which took over the Primrose and Bluebell claims on the Kenai Peninsula in 1912. Hubbard remained the principle operator of the Primrose Mine until his death in Seward in 1969.

Collection description:
The collection consists of papers and photographs relating to Charles Hubbard’s work as a miner and prospector in Alaska. Included in the collection are letters from Hubbard to his wife Bertha, a journal he wrote while traveling up the Copper River, an oral history interview he gave in 1966, stock certificates from the Crown Copper Company and the Kenai-Alaska Gold Company, biographies of Hubbard written by his wife and daughter, and photographs.

Arrangement: The collection has been arranged into the following series:

Rights note: Archives and Special Collections holds copyright to materials created by Charles Goodyear Hubbard II. The collection contains material not created by Hubbard, which may be subject to copyright restrictions.

Separated materials: Copies of the article “Prospecting the Great Unknown: A Miner’s Tale of Life on the Copper River in 1898” by Charles Hubbard, printed in the 1986 publication of The Alaska Journal, were removed from the collection. Please contact an archivist for further information.

Acquisition note: The collection was donated to Archives and Special Collections in 1989 and 1990 by Helen H. Nicholson, Hubbard’s daughter. A deed of gift was signed by Nicholson.

Processing information: This collection was arranged and described by Dennis Walle in 2000. The guide was converted to current standard by Veronica Denison in 2016.

Location of originals: The collection contains transcripts of some original letters and copies of select documents, which are noted in the container list below. The originals were retained by the donor.

Series 1: Correspondence and journal; 1898-1906. 0.1 cubic feet.
This series contains letters Charles Hubbard sent to his wife, Bertha, and a journal Hubbard wrote on his journey up the Copper River in the winter of 1897-1898

Series 2: Papers and oral history; 1905-1990. 0.05 cubic feet.
The majority of this series contains papers and an oral history containing information on Hubbard’s life as a prospector and miner.

Series 3: Photographs; undated, 1904-1987. 0.1 cubic feet.
Subjects of the photographs in this series include Hubbard, his mining claims, his cabin on the Primrose mining claim, and the Charlie Hubbard Museum near Cooper Landing.