When collections arrive there is a certain level of excitement. We love to get our hands in them, begin describing, and always look forward to what we will find. We also tend to learn something new with each collection, and we get to see bits and pieces of others’ lives. But when they come in, largely undescribed, in no particular order, and more than 5 boxes, there also tends to be a level of intimidation. We know that it’ll take a while and some of our other job duties may be pushed aside. We want to describe the collection quickly to make it available for researchers (and to get it out of the Archives Research Room), but we also do not want to rush and make mistakes. And we have to think of how we will describe the collection, and where we will begin.

I have been wanting to write a blog post that will walk readers through the description process for a while now. But I’ve been too busy to document more than I normally would while describing collections, or I just kept forgetting. But when the Johnny Ellis papers arrived in our research room, I figured it would be the perfect collection for this post. 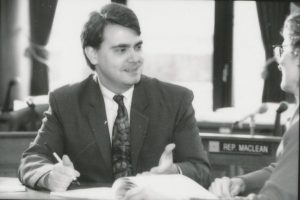 In 1986, Ellis, a democrat, was elected to the Alaska House of Representatives, where he served until 1992 when he was elected to the Alaska State Senate. During his terms as State Senator, Ellis represented the communities of downtown Anchorage, Fairview, and South Addition. He also served as the Senate Minority Leader from 1998 to 2008, Senate Majority Leader from 2008 to 2012, then again as Minority Leader from 2013 to 2014. In 2016, Ellis decided not to seek reelection. The collection consists of Johnny Ellis’s bill files regarding legislation, files relating to committees he served, correspondence, and photographs.

We received the first accession of the Johnny Ellis papers on September 13, and the second came two weeks later. In total, we received 52 boxes and roughly 65 cubic feet of material. Through reboxing, foldering, recycling, and shredding, we ended with 28.25 cubic feet and 3 MB. (More boxes from Juneau should be arriving any day.)

When the collection arrived, it came in looking like this: 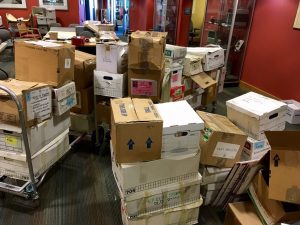 Johnny Ellis papers on first arrival to the Archives 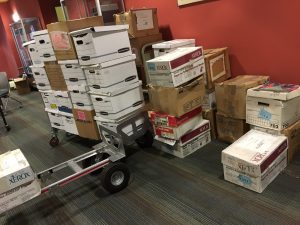 A more organized view of the boxes

Thirty-three boxes in the first accession were numbered, but I soon found out those numbers did not serve a purpose. Well, at least as far as I could tell, however my theory is that they were given numbers to keep track of the boxes while the legislature changed buildings. But I still had to come up with a plan as to how I was going to tackle this collection, so I used the box numbers to my advantage. I decided to start with the box labeled number 1. A majority of the boxes also had box descriptions written on the sides (some were wrong), but I also used those–making sure like material was described together if possible. For example, if unnumbered boxes 1 and 2 had reading files dating from 1988-1993, and numbered box 1 had reading files from 1994-1995, then I would describe and box those files together. As soon as I determined what I was going to do, I began to delve into the boxes, and started the reboxing process with occasional foldering and refoldering. 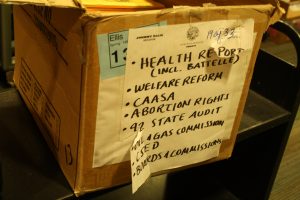 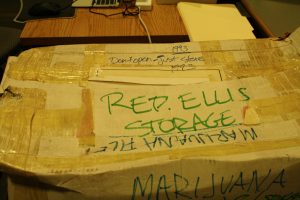 Another box with information written on the side. This one contained subject files regarding marijuana legislation. 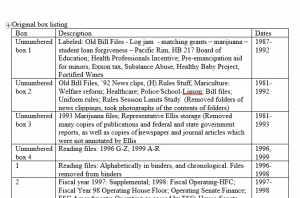 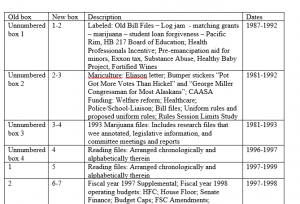 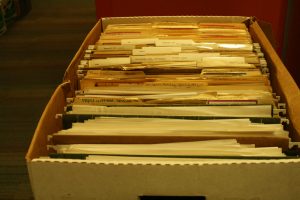 File folders in a bankers box

While describing the collection I used the original folder titles in the box listing whenever possible. The folders were largely grouped by topic in the boxes, and most were within file folders, which would have a broader heading.

I also noted within the tables what material I permanently removed from the collection. There were a few boxes of news clippings, so I took some photographs of the material and recycled them. There was also legislative spending, account information and check books, which were destroyed (shredded), along with a listing of constituents that included their names, addresses, and phone numbers. I noted what boxes had publications, and set the publications aside. I also removed plaques and objects. (Please read Part 3 of the blog series for further information on why we remove material from collections). 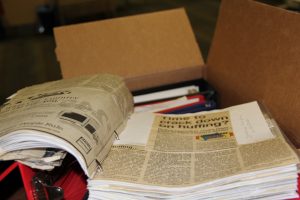 A lot of the materials were in binders, such as his reading files, constituent correspondence, some bill files, and news clippings. Everything was removed from binders and placed into folders, except for the news clippings, which were recycled. Removing materials from binders saves a lot of space, and we give the folder the same name as the binder. We also keep the material in the order that it was in the binder, therefore limiting the loss of context.

I was fortunate enough to have a student worker during the first week of description. He provided tremendous help. He would read off the folder labels in the old boxes while I would type the descriptions in the table. Then both of us would take a stack from the box, and look through each folder, making sure the label was correct. We would also be on the 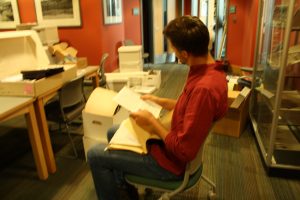 Our student worker looking through a folder

lookout for published reports within folders, duplicates, and financially sensitive or personally identifiable materials. We found an occasional folder with someone’s health information, which they had sent Ellis. We would remove those as well. (Constituents would send him their personal health files to help with his various health related bills). We also checked for the dates of the material in order to provide appropriate dates for the collection.

Ellis had a lot of bill files, which shouldn’t be that surprising given his many years of service as an Alaska State Senator. But he had kept multiple copies of the same bill. A lot of them were updated versions of the bill, and many had Ellis’s annotations, edits, and notes. If the bill had his annotations I kept it, otherwise I would recycle them, and keep just one copy of the bill without annotations. 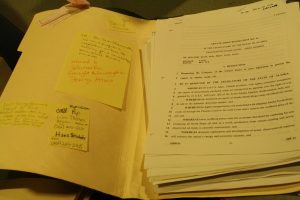 One interesting aspect of the Ellis papers was in many cases the folder would be a record itself. There were many folders that Ellis and/or a staff member would write notes on, sometimes on a sticky note and sometimes not. The folders were typically in good condition so we did not refolder the material. If we did, we would save the original folder because of the notes. 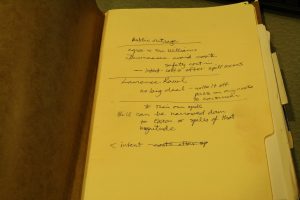 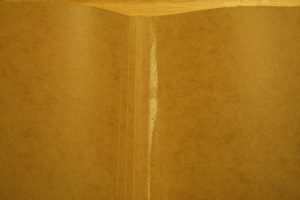 Drink mix in a file folder

Like almost every collection, the Johnny Ellis papers came with its fair share of dust and insect parts–risks of being kept in storage. But when pulling some folders out of a box, I noticed a sticky substance. It was decided it was probably some kind of drink mix, most likely hot chocolate. I brushed the papers off and refoldered them, throwing out the original folders. This is not unusual in anyway, we have seen it all.

The Ellis papers also included many floppy disks and zip drives. The 5.25″ floppy disks are currently inaccessible since we do not have a disk drive for them. I was able to open the 3.5″ floppy disks and save those files on our server, which is currently only accessible in the Archives Research Room. As for the zip drives? Those are a little different. We have the drive for the disks, but we do not have the required software. When I tried to download the software on my computer, it completely shut down and would not start back up. It even gave me an emoji sad face. Thankfully, the Library’s IT Department was able to come to the rescue so I would not be without a working computer all day. (Note to everyone, it is not suggested to download 10 year old software on a PC with Windows 10). I still need to get together with the IT Department to help download the software on another computer, which should be able to support it. 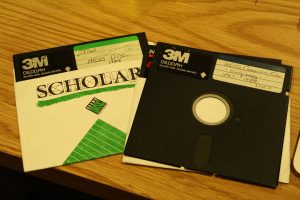 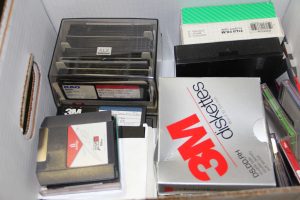 I spent around 68 hours just in reboxing, foldering and refoldering, and working on the finding aid. The student worker spent around 20 hours working on the collection with me. I still have to sort through the publications, which will probably take another 3 days due to the volume. I also had another student worker take photographs of the plaques in the collection, which was another 2 hours. In all, it took a little over 2 weeks (85 hours) to describe the collection, which was a lot quicker than I had originally thought it would be.

As for the cost of preservation? It cost nearly $400 in boxes, with the cost of folders being around $275. (These costs also include the shipping of the supplies). The folder cost may be underestimated since we are not usually in the habit of keeping track of supplies used. Then there is also my time and the student workers’ time spent on the collection.

And, as always, anyone is welcome to come to the Archives and do research in the Johnny Ellis papers, or whichever collection they would like. I am grateful Ellis decided to keep his papers, and am looking forward to describing the final shipment of the boxes.

Below are images of some collection materials from the Johnny Ellis papers: 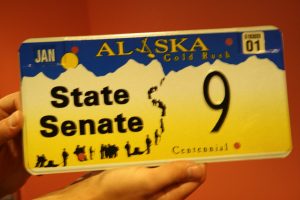 We kept the license plates that came in with his papers 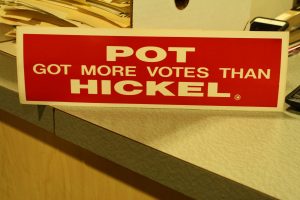 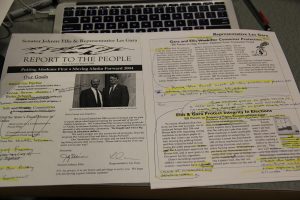 Ellis kept may of his mailings and fliers, so we kept one of each. He also liked to edit them, which is evident in this image. 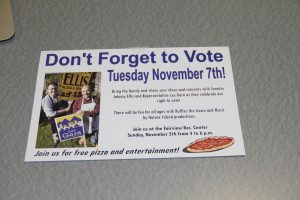 Ellis seemed to have lots of pizza parties for constituents. 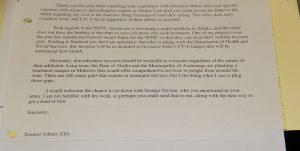 He also would send letters back to his constituents who had written to him. 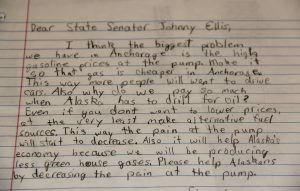 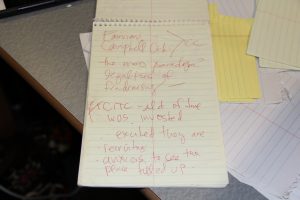 Notes from one his many notebooks 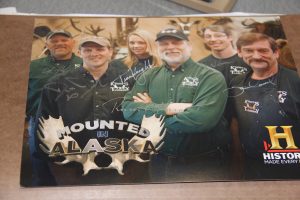 An autographed image from the cast of “Mounted in Alaska” 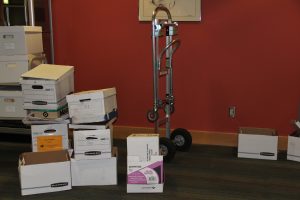 Empty boxes after finishing the collection 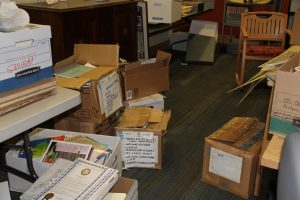 Boxes of publications and plaques, which still need to be gone through 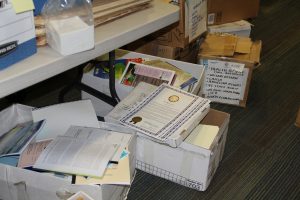 Another view of the boxes of publications 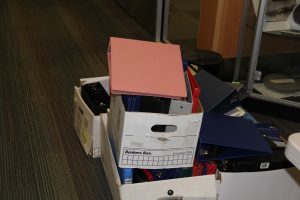 Boxes of empty binders after the material was foldered 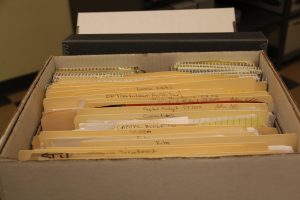 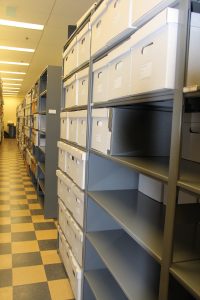 The collection shelved and in the vault 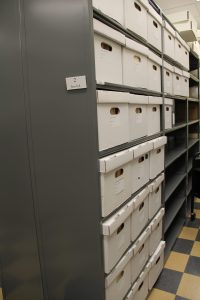 Another view of the collection in our vault